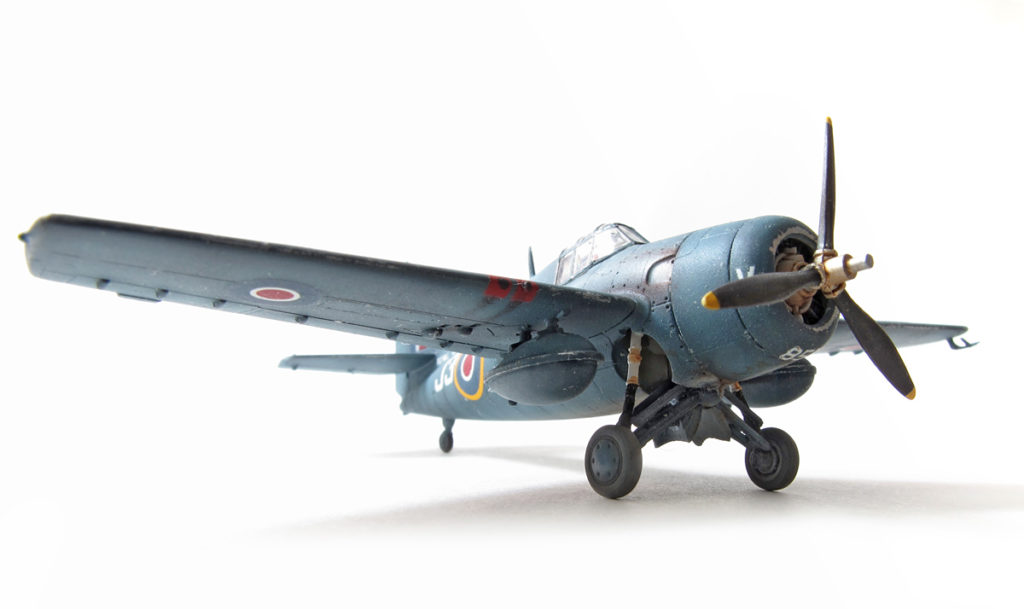 This post is not a deja-vu 😀 . It is another Martlet from SWEET in the same 1/144 scale. Building the kit was a pleasure as I wrote previosly so why not repeat that pleasure again?! If you like to see my first Wildcat/Martlet from SWEET photographs plus quite detailed notes regarding its building, please visit this link.

This second kit is nearly identical – except the camouflage & marking plus some further minor details mentioned here. 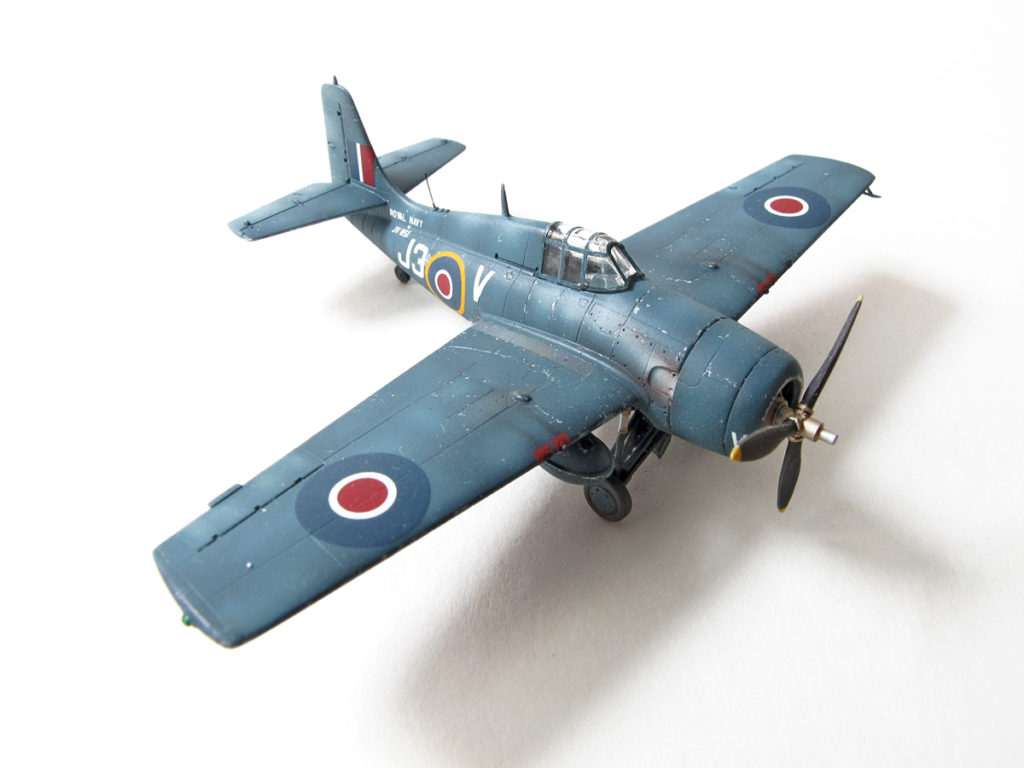 Drop tanks
The whole assemby was nearly the same as was mentioned earlier. Two differences can be found though. Two auxiliary fuel tanks were used to distinguish the kit somehow from the first one. And I wondered how this cat would look with the tanks too. The kit comes with more-or-less truly shaped drop tanks and very schematically depicted attachment and stabilizing brackets. You can see one of the drop tanks airbrushed and patinated here: 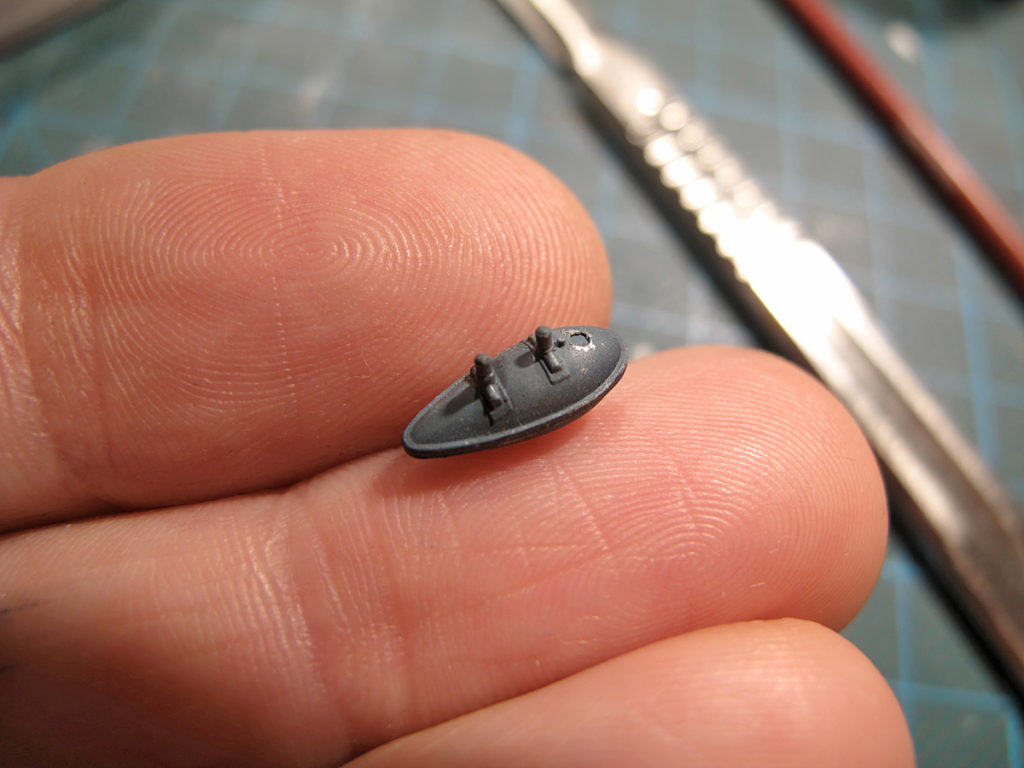 Pitot tube
There was one more improvement this time. It is the pitot tube made from scratch. It was made from a very thin styrene plate following the available historical photographs. A surgical knife was used to achieve the shape resembling the real plane pitot tube. The finishing corrections were made using a very fine grained wet sand paper. Here is my tryout: 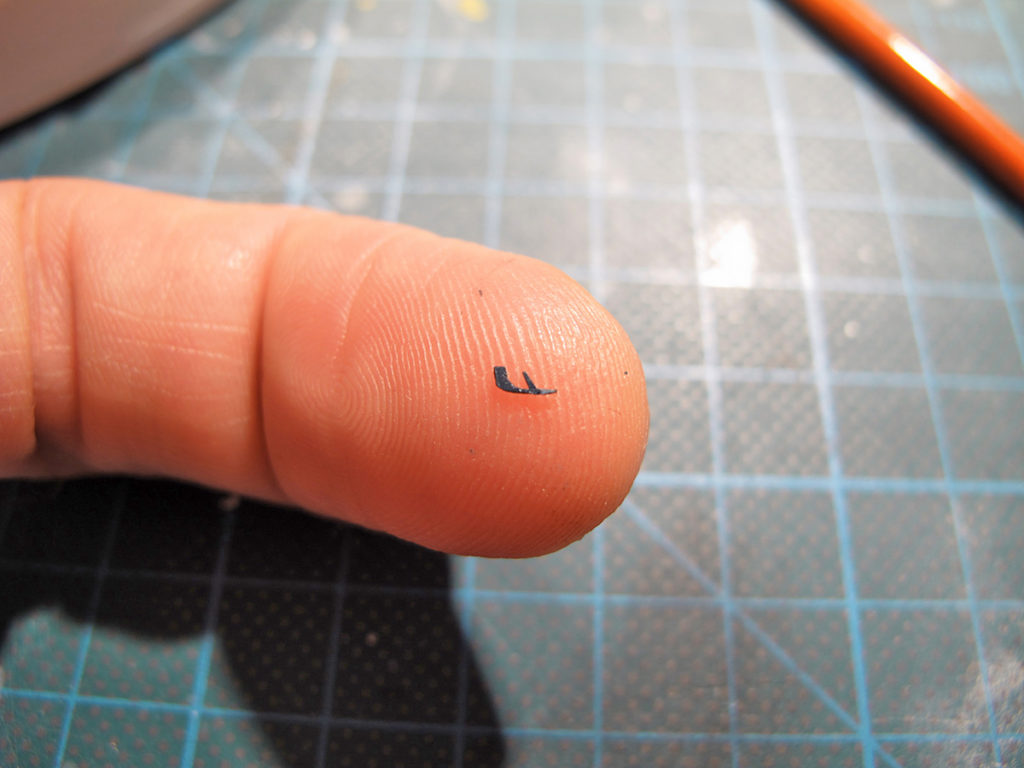 Cockpit
What can you find inside the cocpit? Nearly no details – the reason is clear: the cockpit is nearly invisible through the thick canopy “glass”. One can find a tiny cylinder representing the pilot’s head-rest as attached to the canopy rear cross-wall. This wall lower end is bent – shaped as there was something like a pilot’s seat. And the main instrument panel or better say a small dent in that place. Despite the “invisibility” of the cockpit I tried to enhance it a bit – placing a pilot’s backrest and harness inside it: 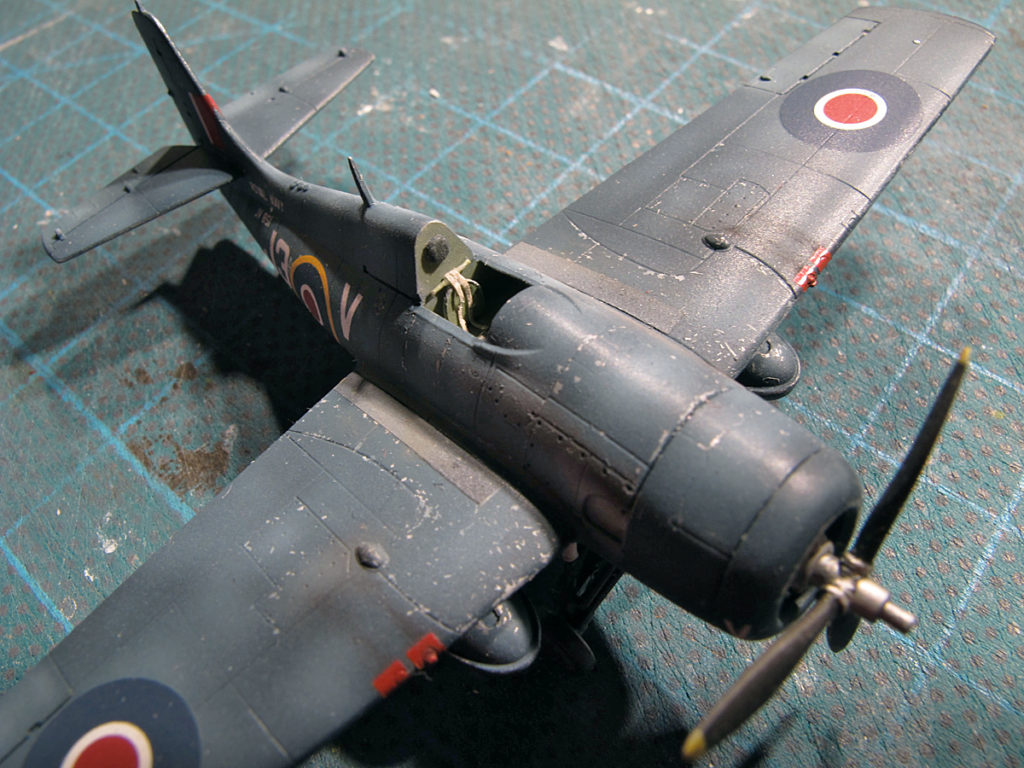 Now I know the only way how to make this place visible is replacing the canopy with a brand new vacu-form one (maybe next time?). You can see nearly nothing inside otherwise.

Camouflage
The camouflage was made according to the instructions found within the SWEET Martlet kit.  No 4. scheme was chosen which is JV851 / J3 • V, No 794 Sqn, Eglinton from October – November 1945. The whole plane is painted Dark Sea Blue. 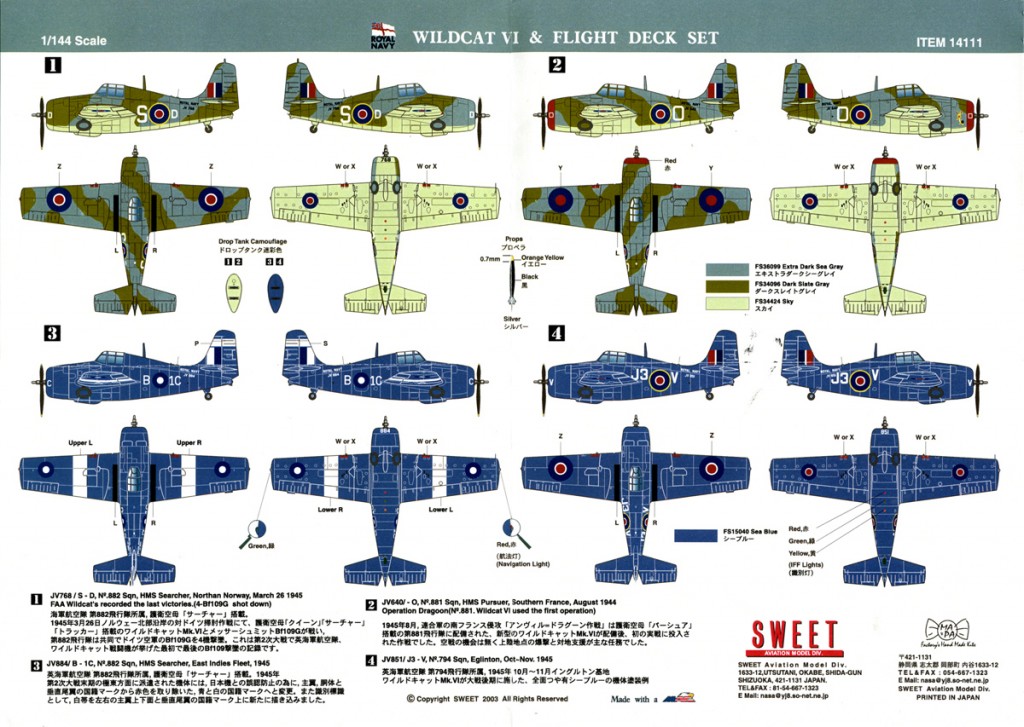 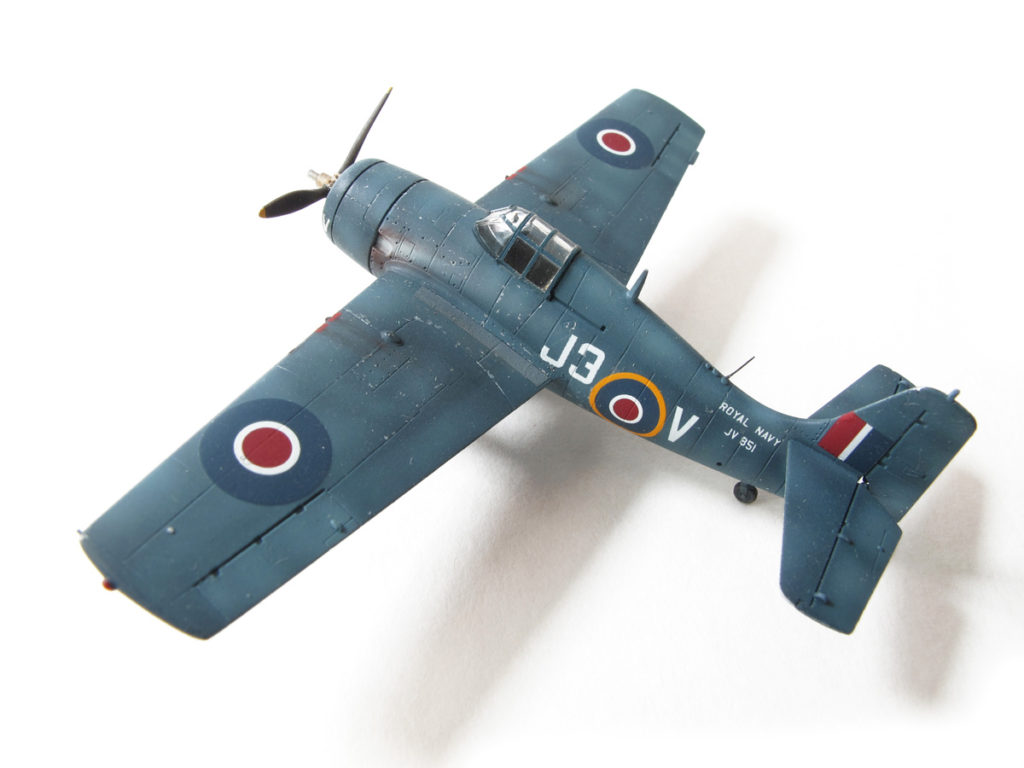 Lightening the Colour
The camouflage colour was lightened by adding drops of white colour as with the first Wildcat. Because the kit is in a very small scale it is better to lighten the colour more intensively. I also wanted to make the camo colour uneven due to the weathering effect. More shades of blue were sprayed rather than one unified shade. 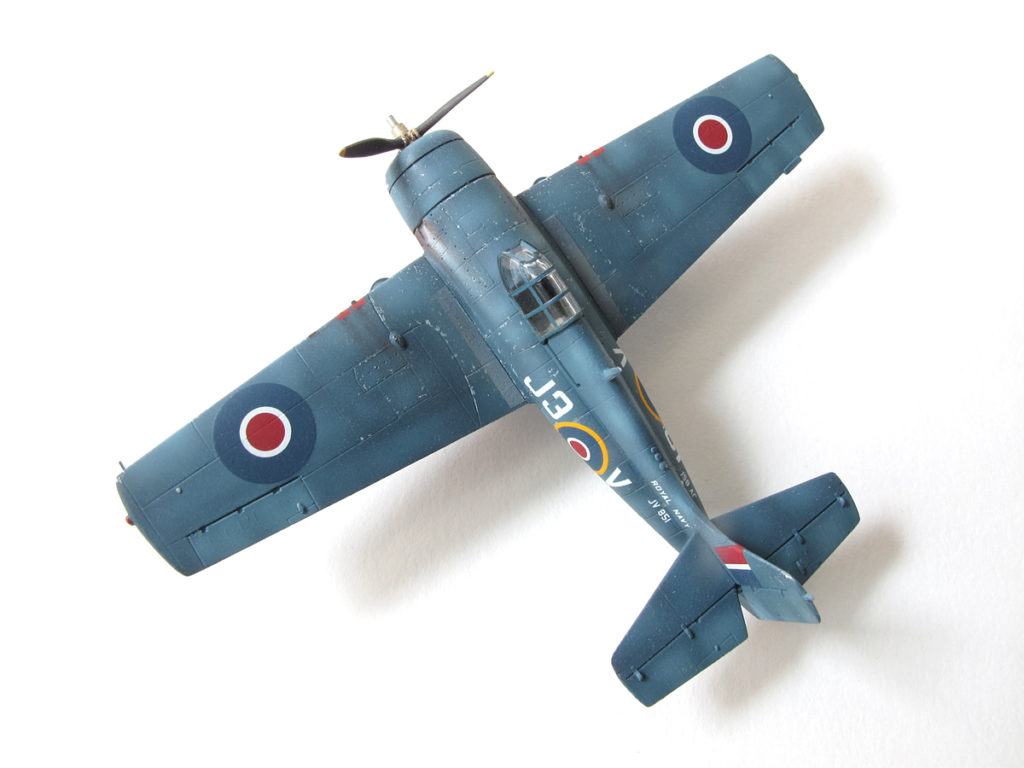 Patina
Firstly the whole airplane was airbrushed with Alluminium ALCLADII lacquer as a base colour. Then the enamel Dark blue camouflage colour was applied in varying shades.  And finally – after a short drying period – the number of tiny scratches and delicate color chippings were made with a sharp knife and a needle. 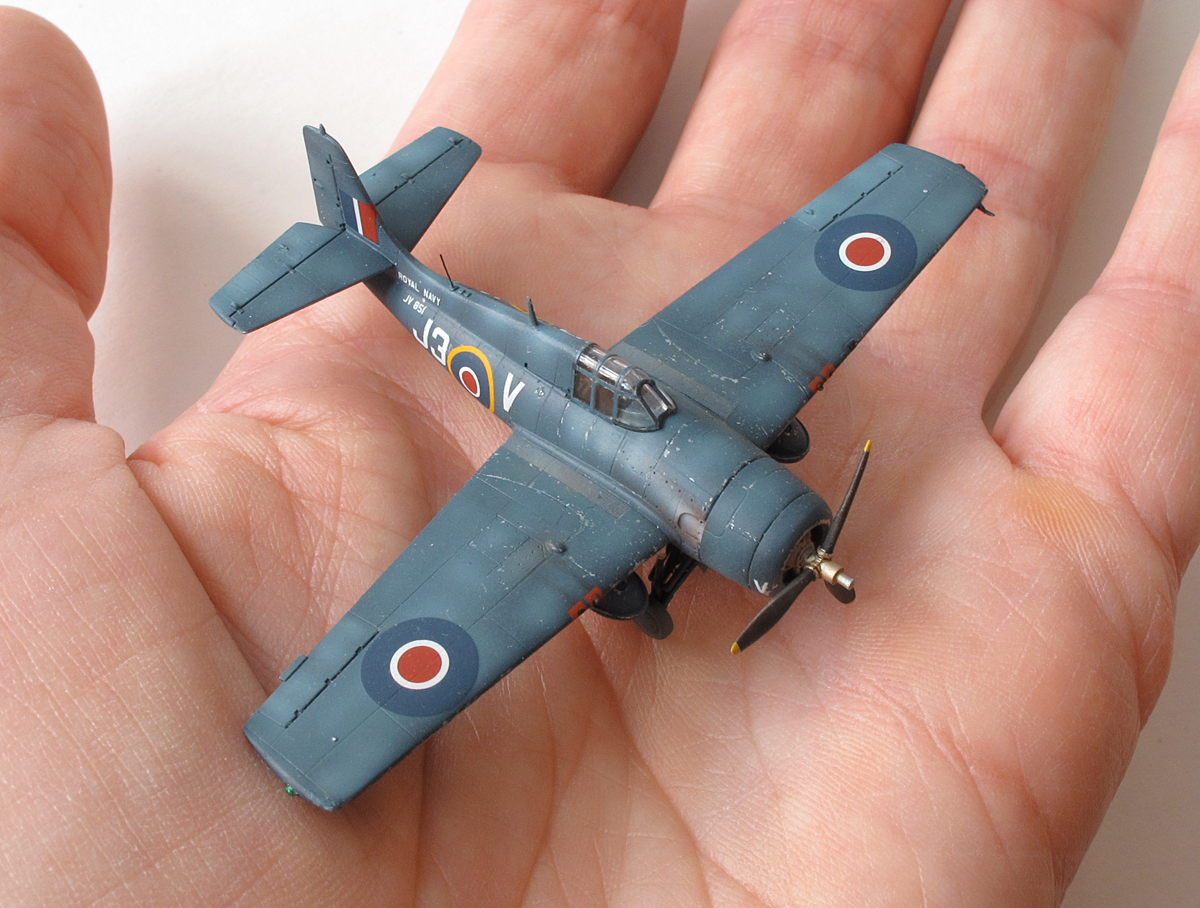 The exhaust stains were airbrushed with matt Lt. gray while the gun stains with Dk. brown. The exhaust stains edges were enhanced using the dry rusty-brown pigment from Czech Master Kit applied with a pointed-tip brush. 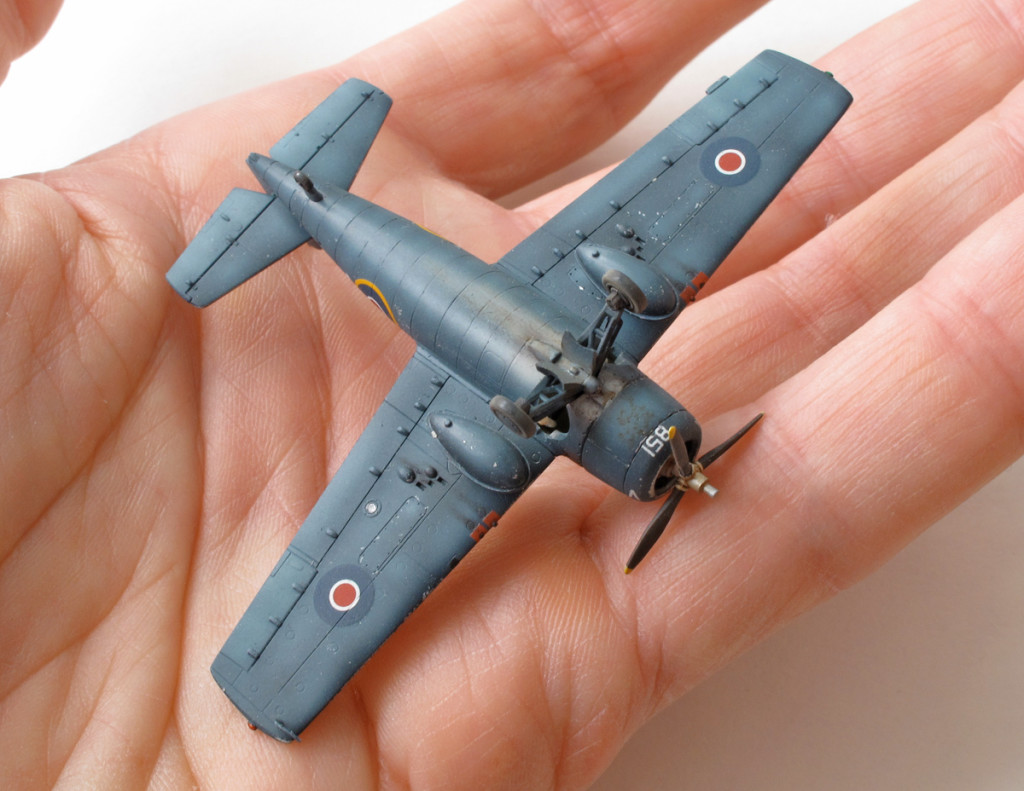 Decals
Original and excellent CARTOGRAF decals were used again. Large decals and walkway bars were oversprayed with a light mist of camouflage colour mixed with white – to lower the contrast between decals and camouflage and to simulate the sun fade-out effect. Home-made decal stripes were used as a canopy framing: 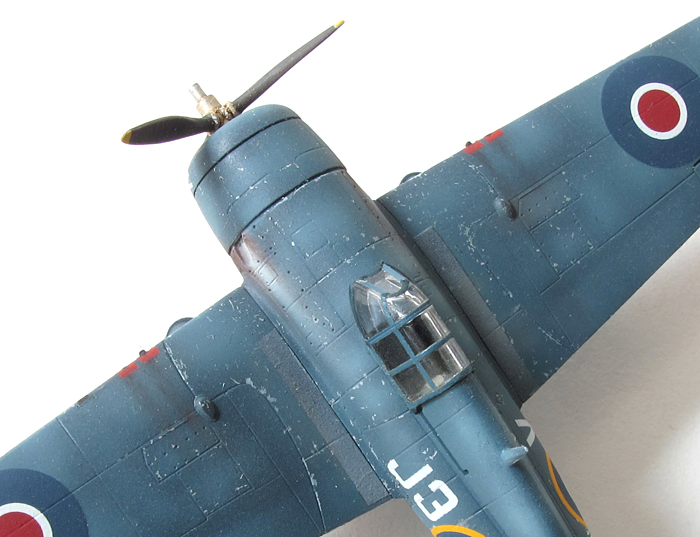 8 cats in a box
The model kit comes with the Flight deck set. It contains the part of a carrier deck plus eight cats crew with wheel chocks. The cats might be somehow infantile for someone – but I have to say they are very nicely molded! 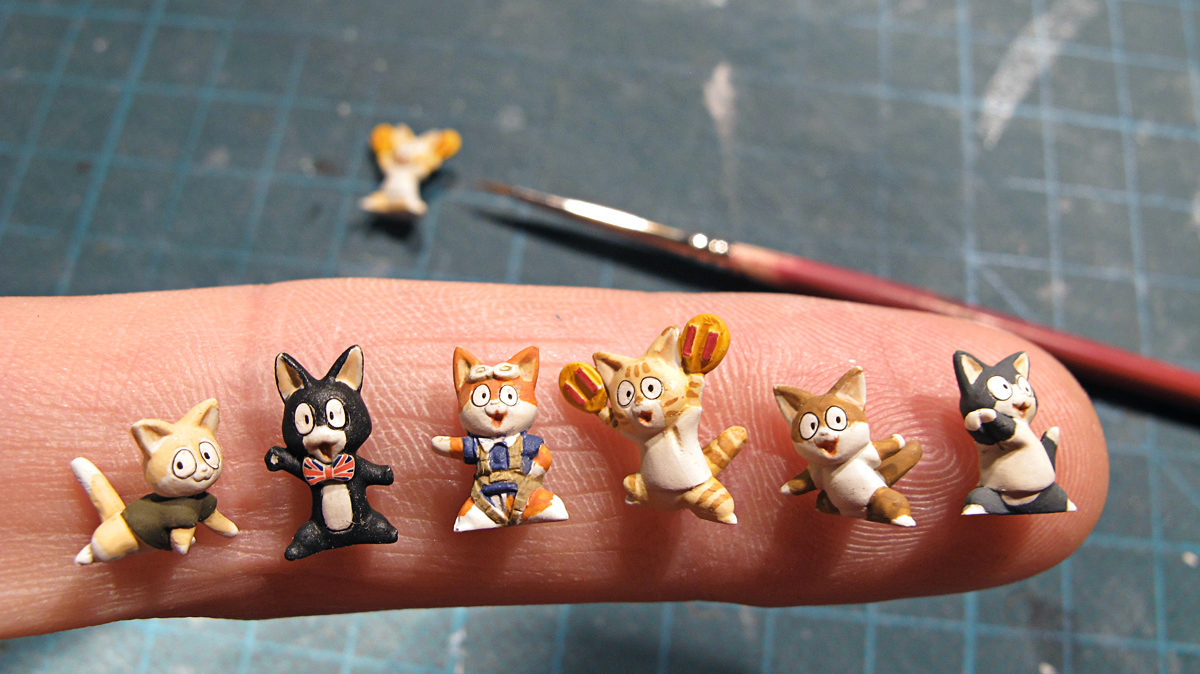 Here are 6 figures of the cat crew so far (upper picture). Eyes and U.K. flagged bow tie are the decals while the rest is hand painted. The box cover depicting all the cats: 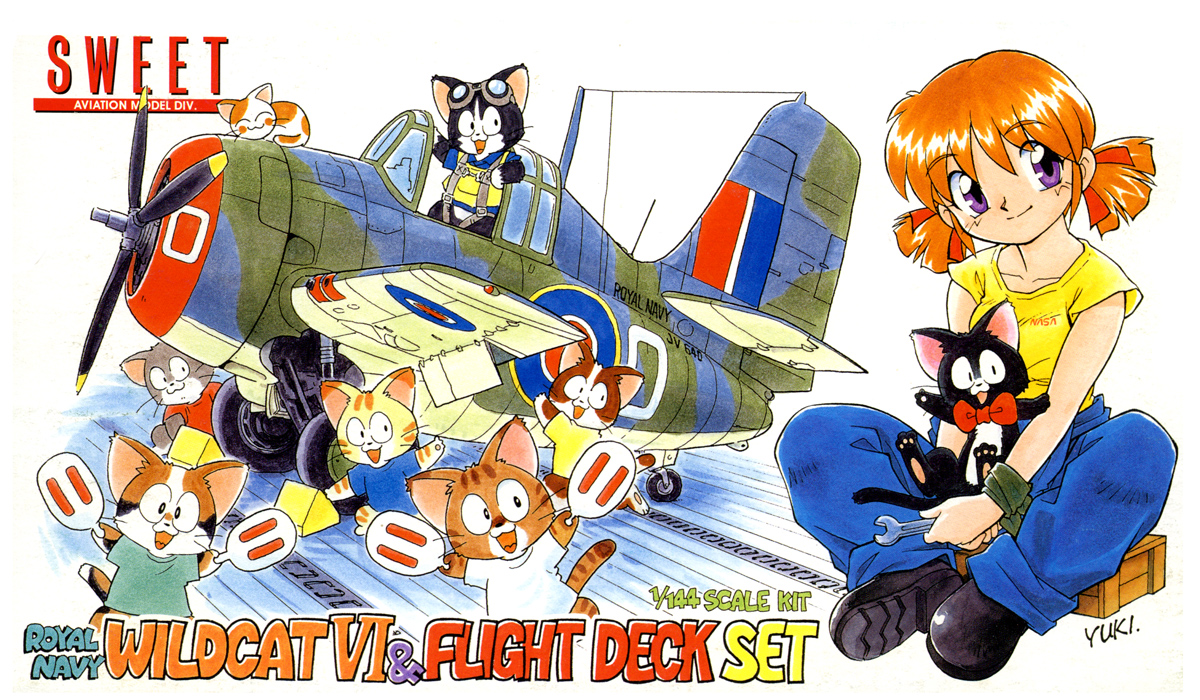 I decided to paint the whole cat crew trying to make something like a fairy-tail diorama.
I will post it here if it is reasonably looking.