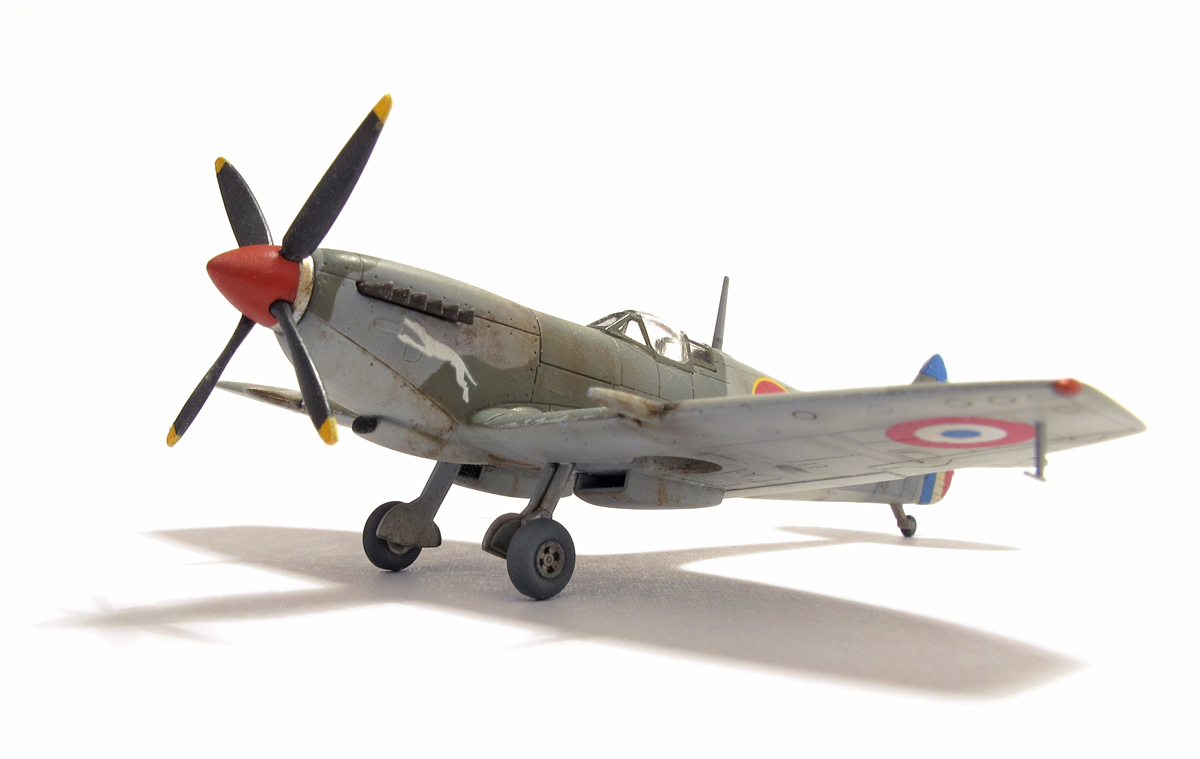 For its tiny scale (1/144) it seemed better to me not to build only one eduard’s Super44 Spitfire. I had bought one box #4429 containing two Spitfires Mk.IXc and another box #4428 containing two Spitfires Mk.IXe and started to build them simultaneously. You will find one fully finished c-model in this post and two nearly finished e-models. The reason of this combination (of finished and nearly-finished kits) will be cleared later on.

I would like to compare the kits first, but not the c and e Spitfire variants but the model kits as moldings. After opening the boxes, both kits look very similar, except from the typical “C” and “E” wing types of course, plus rudders, then a bit different exhaust stacks and the wheels discs too. Both kits look essentially the same but to my surprise there is one significant difference in the way these kits can be put together. 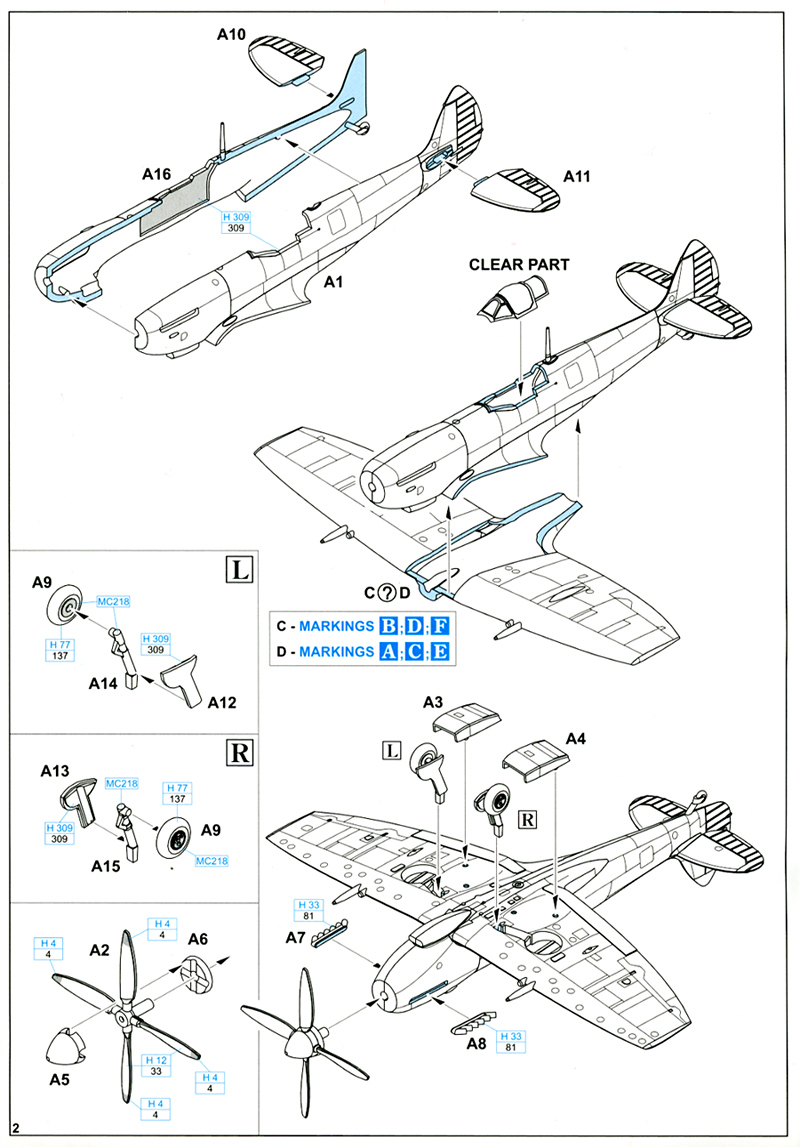 The eduard Spitfire Mk.IXe instruction sheet. Boxing contains the normal and the shortened-wing option too. The slot for the fuselage insertion is well visible.

Dry-fitting the e-kit fully satisfied me. One can put the fuselage halves together, then put them into the wing slot – everything sits precisely. After brushing a drop of liquid glue into the tiny gaps, everything is perfectly bonded in seconds. 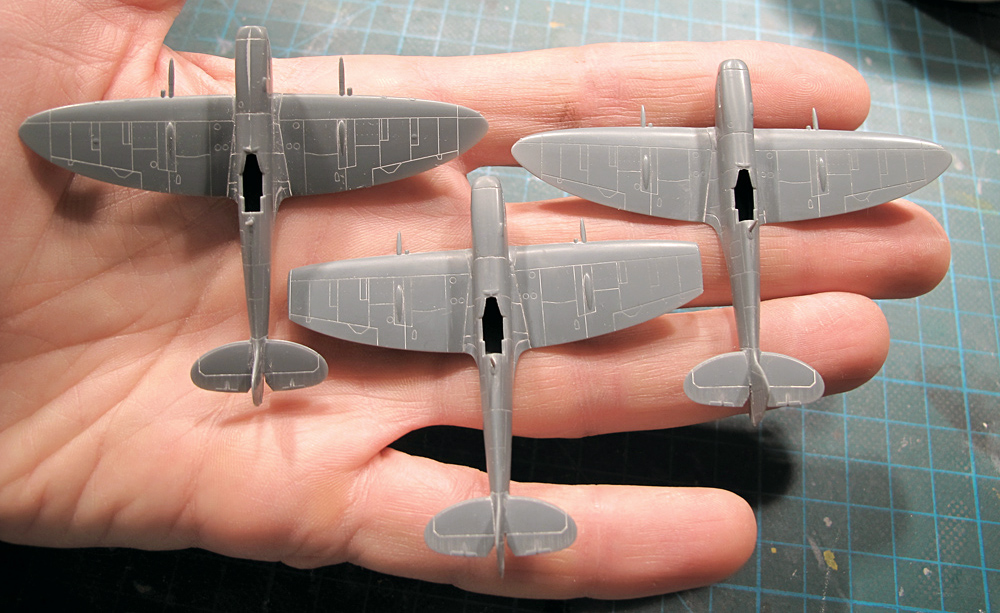 It is definitely not so with the c–kit though. The fuselage halves are apparently not friends with the wing –  they want to jump out of the wing slot stubbornly. Thus the connecting surfaces have to be slightly adjusted – and for me it looked relatively hard to find where.

(By the way – another boxing of the c–kit was probed to avoid this issue but the same thing happened. The c–kit is simply somehow different – not so fine-tuned as e-kit).

2/ Improvements I have made

After checking several photographs of my freshly built Spitfire I felt dissatisfied. It was anything but Spitfire – without the typical rear view mirror and the Pitot tube. 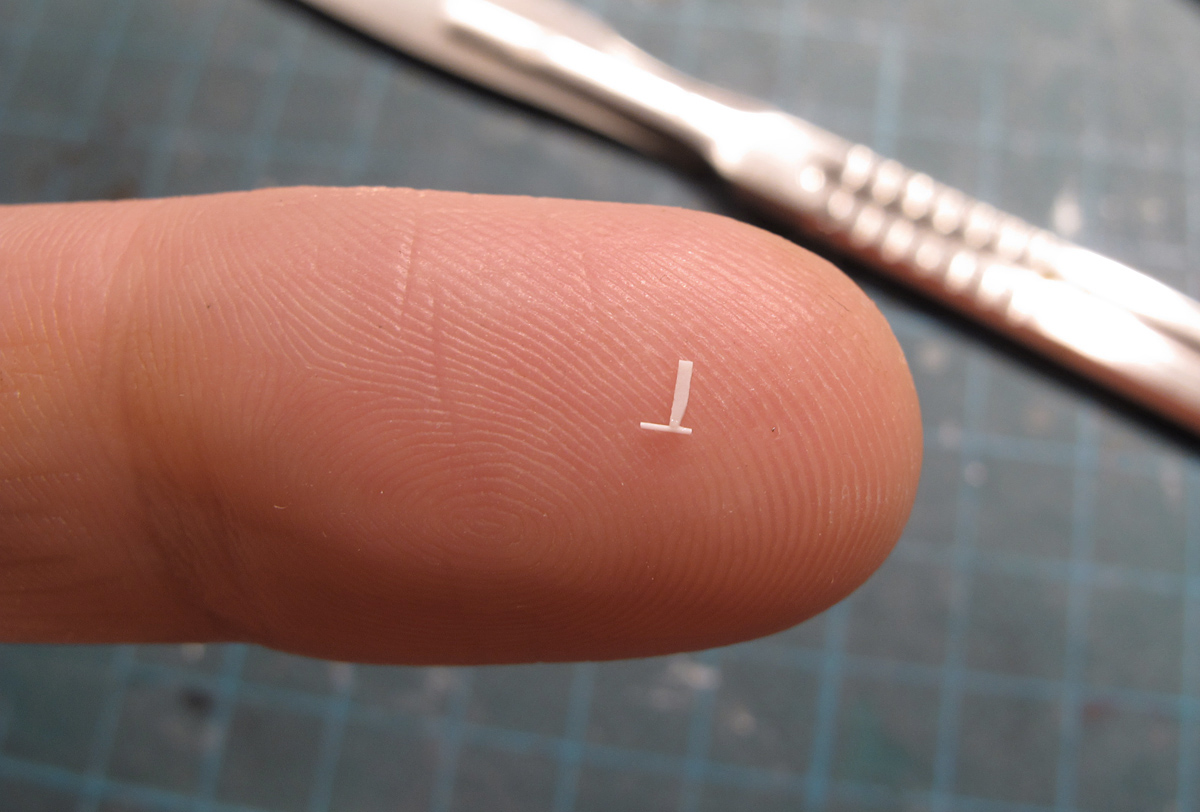 Rear view mirror
Basically the rear view mirror was made using the Evergreen rod. First I tried to make the half-round at the end of the longer piece of the cylindrical rod and then to cut the appropriate length of it. No satisfactory result was achieved this way :-). I had to change my tactics. The Evergreen rod was sliced into dozen tiny rings and put onto some sticky tape. Then a very small drop of five-minute epoxy was dropped onto each ring. The droplets created the needed half-round shape. The best shaped “mirrors” were chosen and finalized using sandpaper. See the picture below: 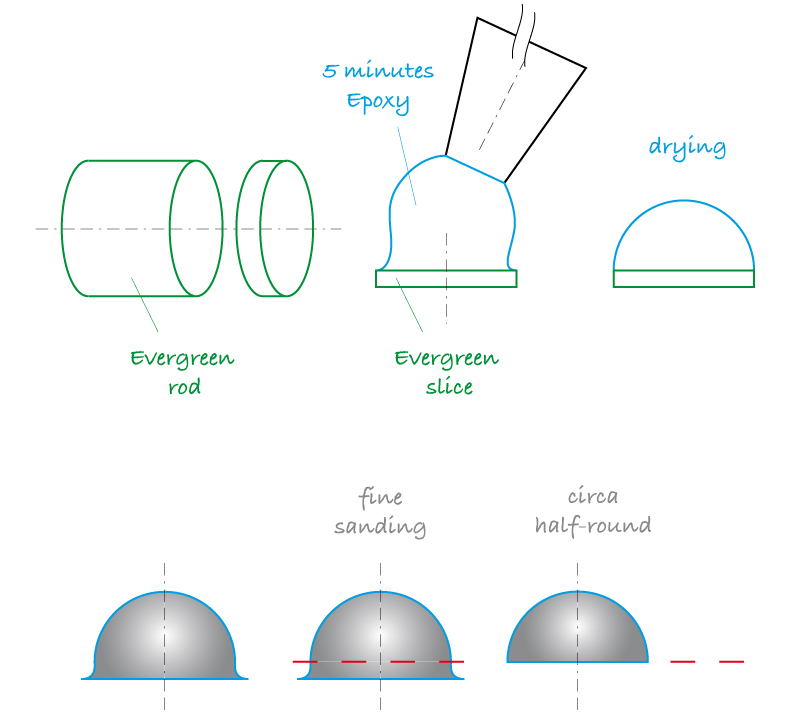 The excess dried epoxy plus the base styrene slice had to be removed by delicate sanding.

Finally the hairy styrene line was attached – to simulate the mirror stand. It also makes manipulation during the painting process easier. The whole was airbrushed and the mirror stand trimmed. The final step was to glue the mirror onto the airplane canopy using tweezers and cyanoacrylate glue. I prefer slower glue – to have enough time for corrections. 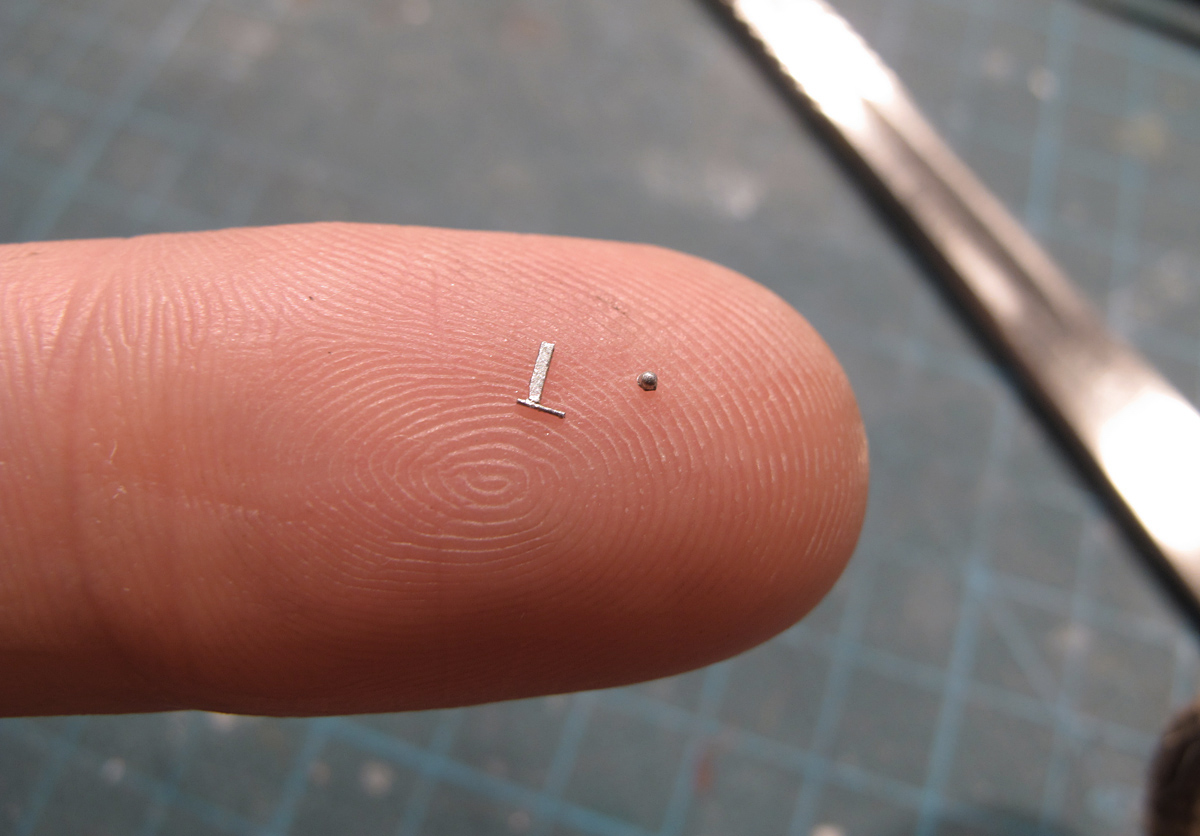 The rear mirror prior to the final touches. It is quite small 😀

You can see my Spitfires both with and without the rear view mirror installed in this post. They were photographed this way so you can see the difference better.

Spitfire Mk.IXc
The painting was made according to the instructions found within the eduard kit. Scheme No. 3 had been chosen, i.e. Spitfire LF Mk.IXc, MJ250, No. 601 Squadron, Italy, Summer 1944. Nearly the entire machine was in silver colour with some aluminium textile surfaces (rudder and elevators). 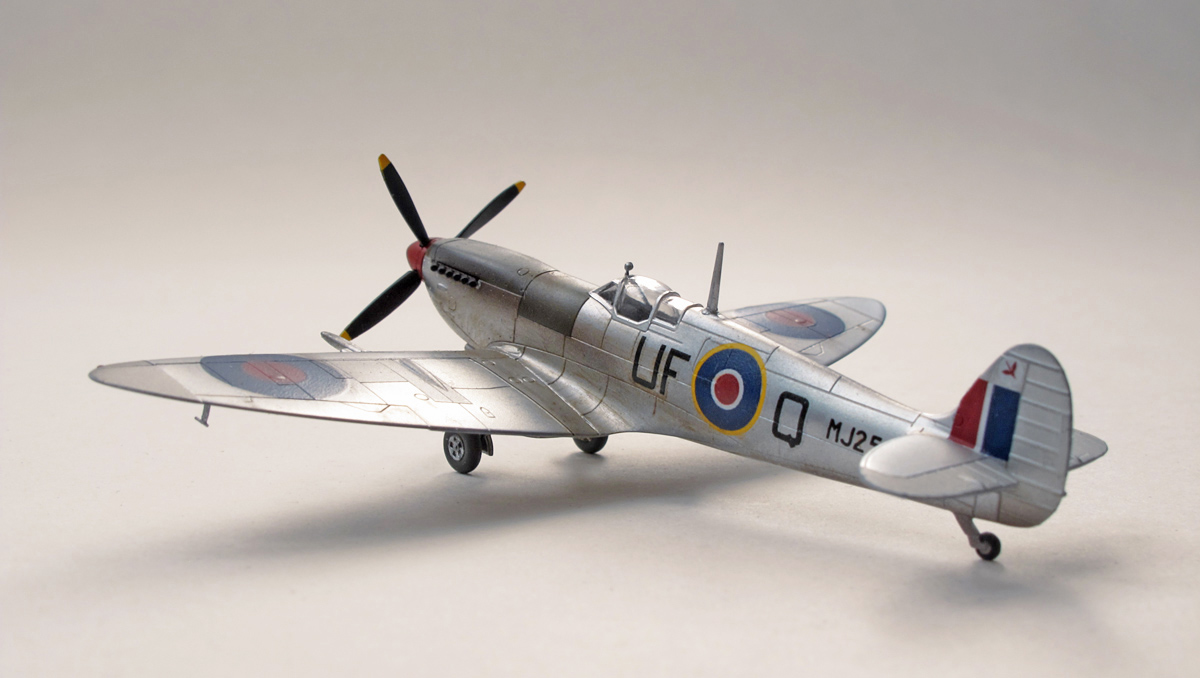 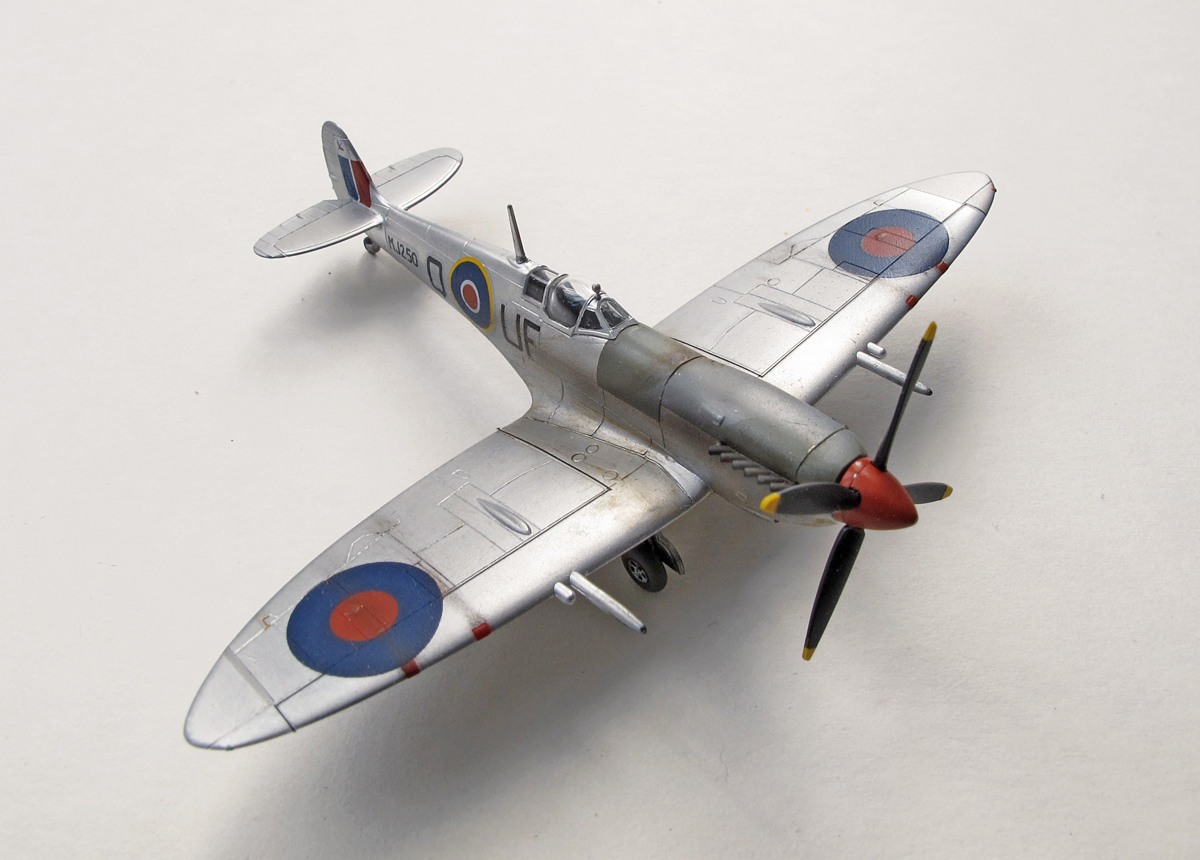 The eduard kit offers two possibilities of the UFQ letters – black or red. I only have a black-and-white photograph of this machine from the web and no further info regarding the lettering colour of this particular Spitfire. The black letters were chosen finally. 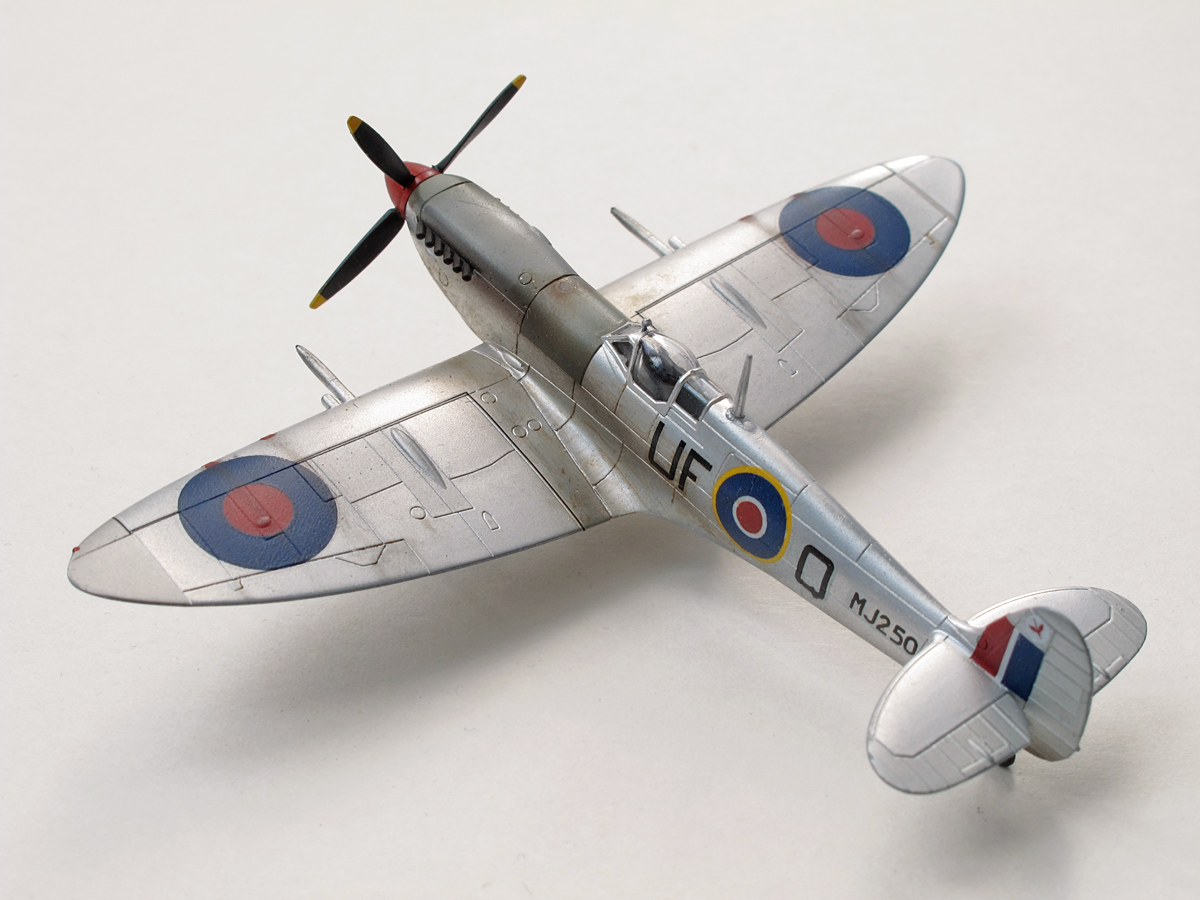 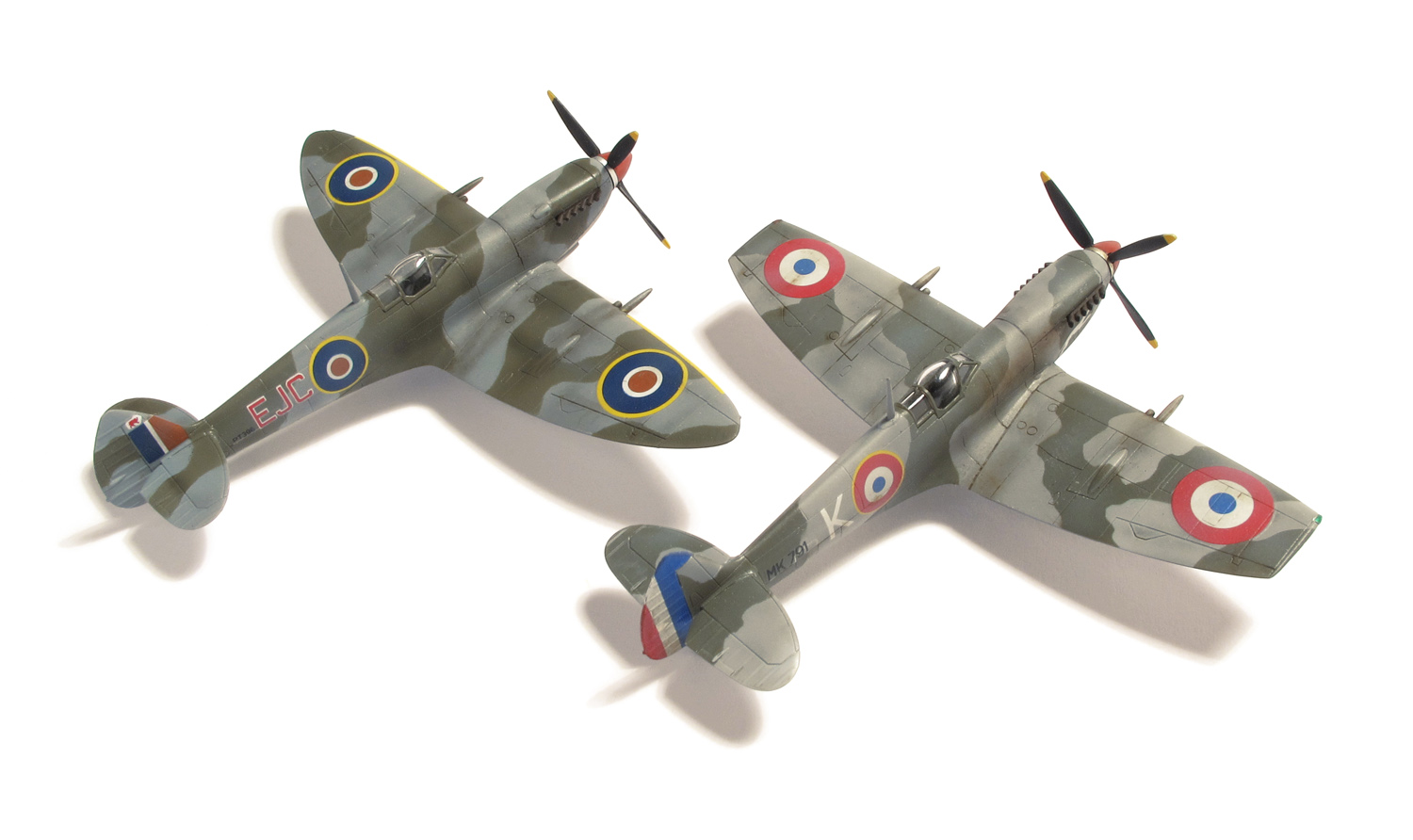 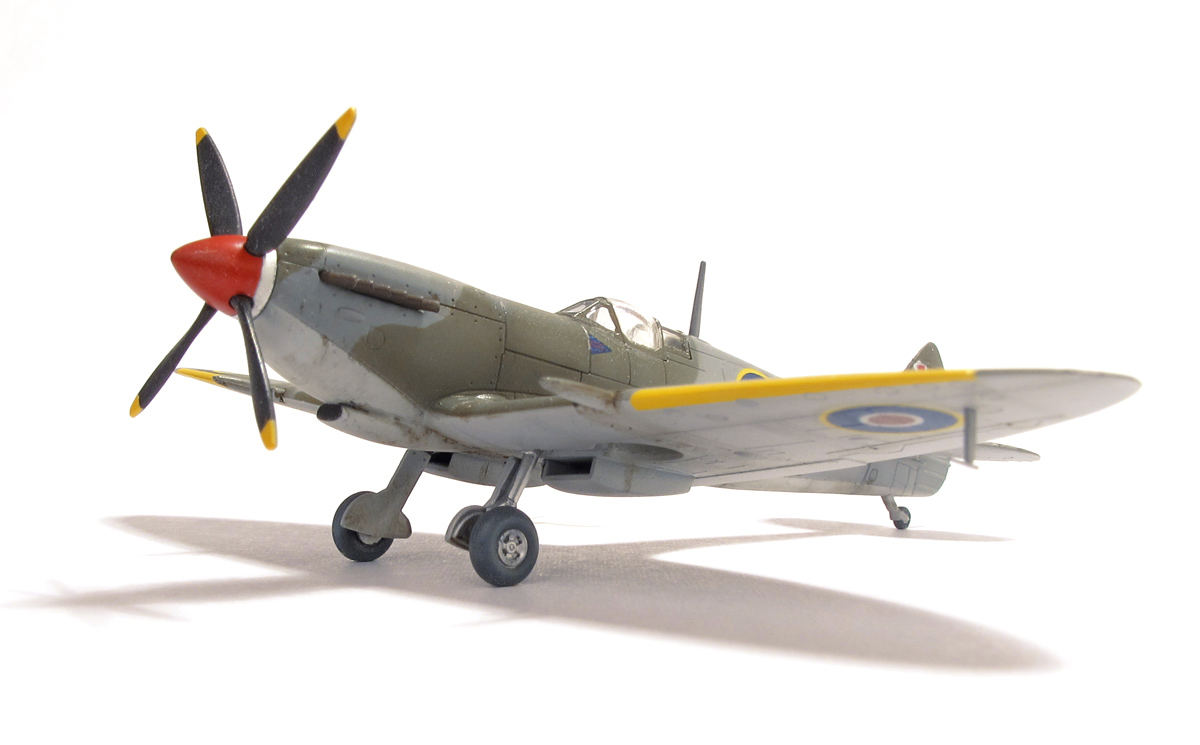 In this scale (1/144) the original shades looked too dark to me – so all the colours were ligtened heavily (nearly 1:1) using #156 Super White. To make the camo colours uneven due to the weathering effect, the particular camouflage fields were finally free-hand oversprayed with darker shades (mainly along the panel lines)

Decals
The eduard kits come with very fine decals – thin film and accurate colours. The British roundels for Spit Mk.IXe (kit #4428) were slightly out of register. Decals were used anyway. For better decal setting, a glossy varnish coat (as the base) was applied first. Both the Mr. Mark Setter and Mr. Mark Softer were used while applying the decals. 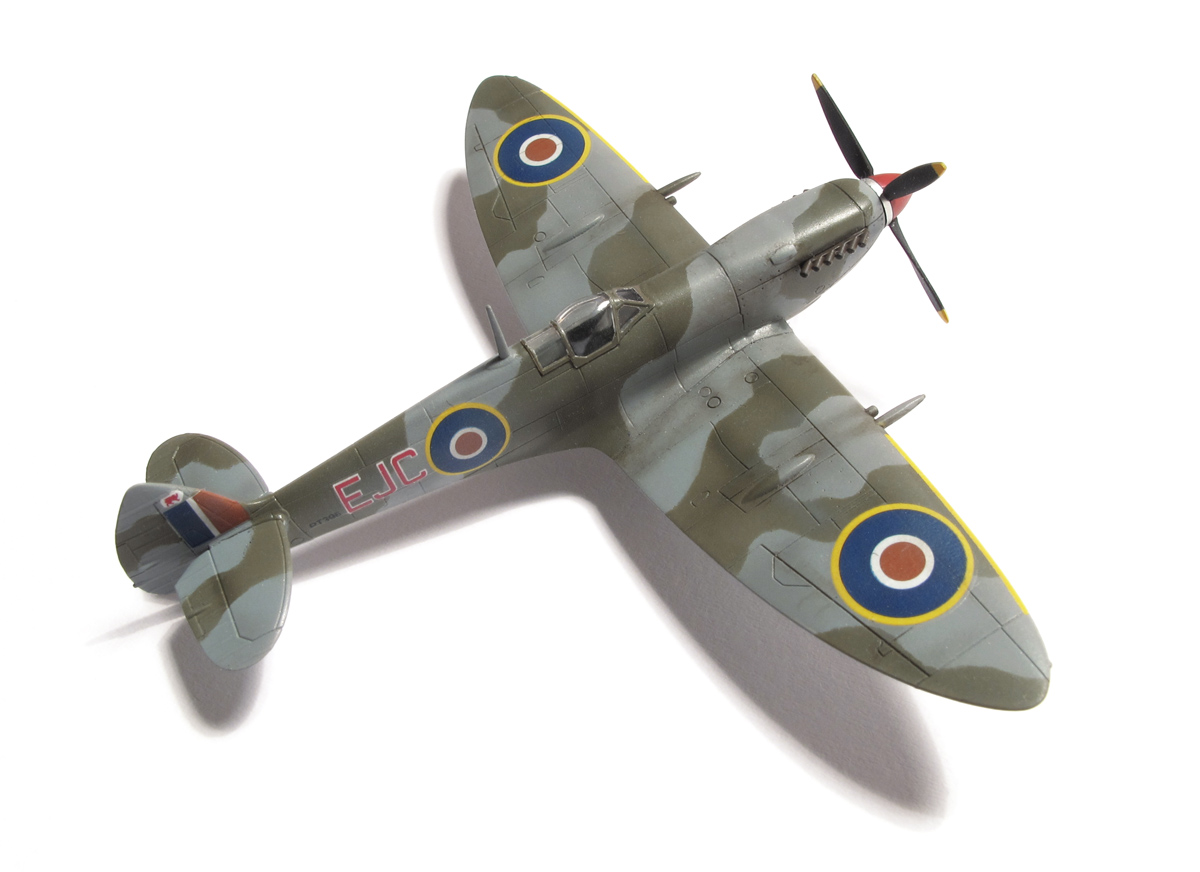 Weathering & Patina
The kit got the Mr. Color Super Clear gloss coat as the base for a weathering mix of brown (Burnt Sienna) and black oil colors diluted by the Mig’s Thinner for washes. 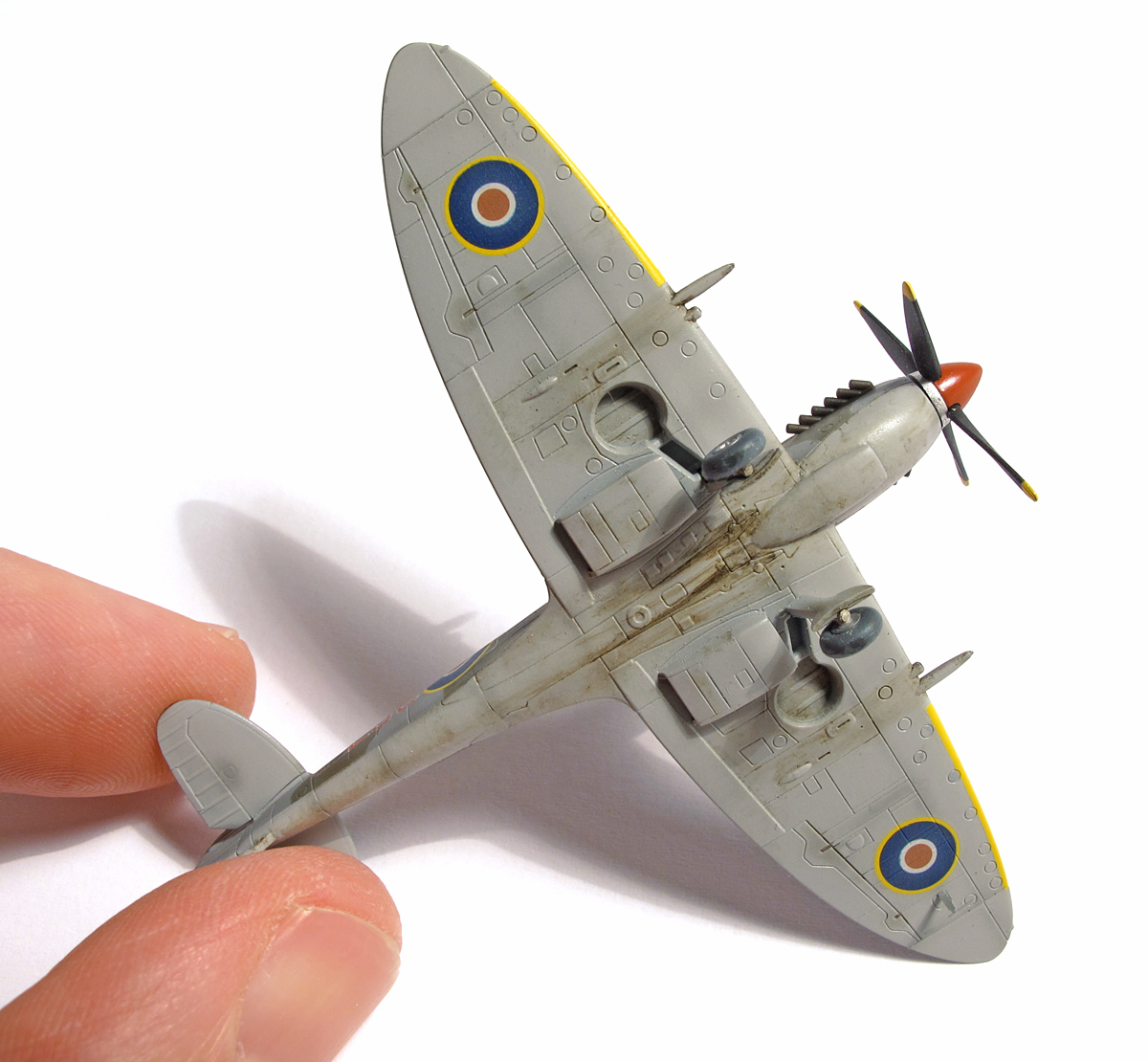 Mud and soil pigments made by AGAMA Patinator were applied onto tires using a brush. Pigment was fixated by a transparent varnish then.

The color chipping was simulated by irregular spots and “scratches” drawn by a sharp silver pencil. 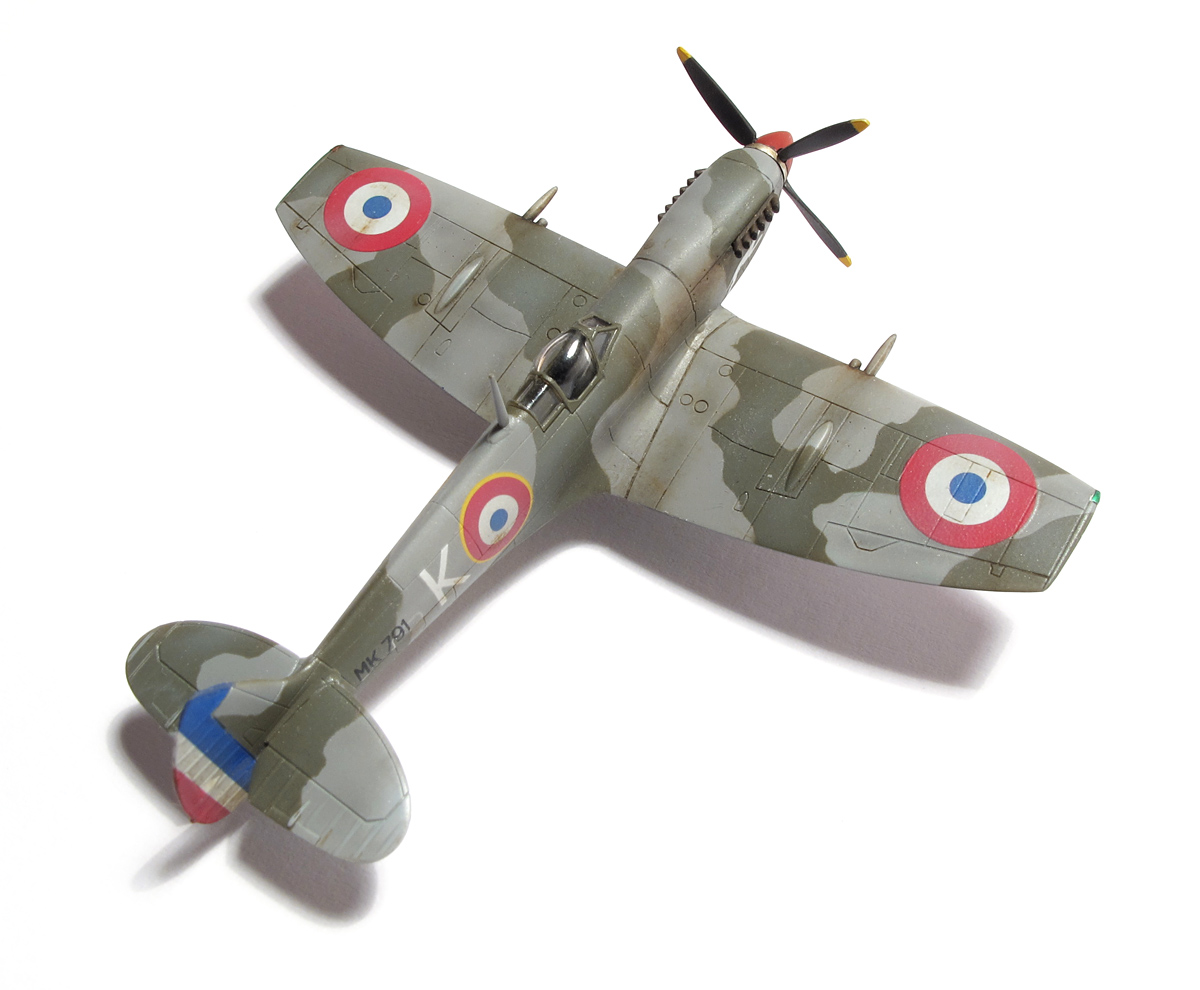 The overall semi-matt feeling of the camouflaged Spitfires was achieved by a tiny coat of Mr. Color Super Clear Matt. The French machine was more weathered and dusted. The white colour in French roundels was damped down overspraying them with a Lt. Grey mist. Finally the kit also got a very thin coat of Mr. Color #69 Off White as the unifying touch. 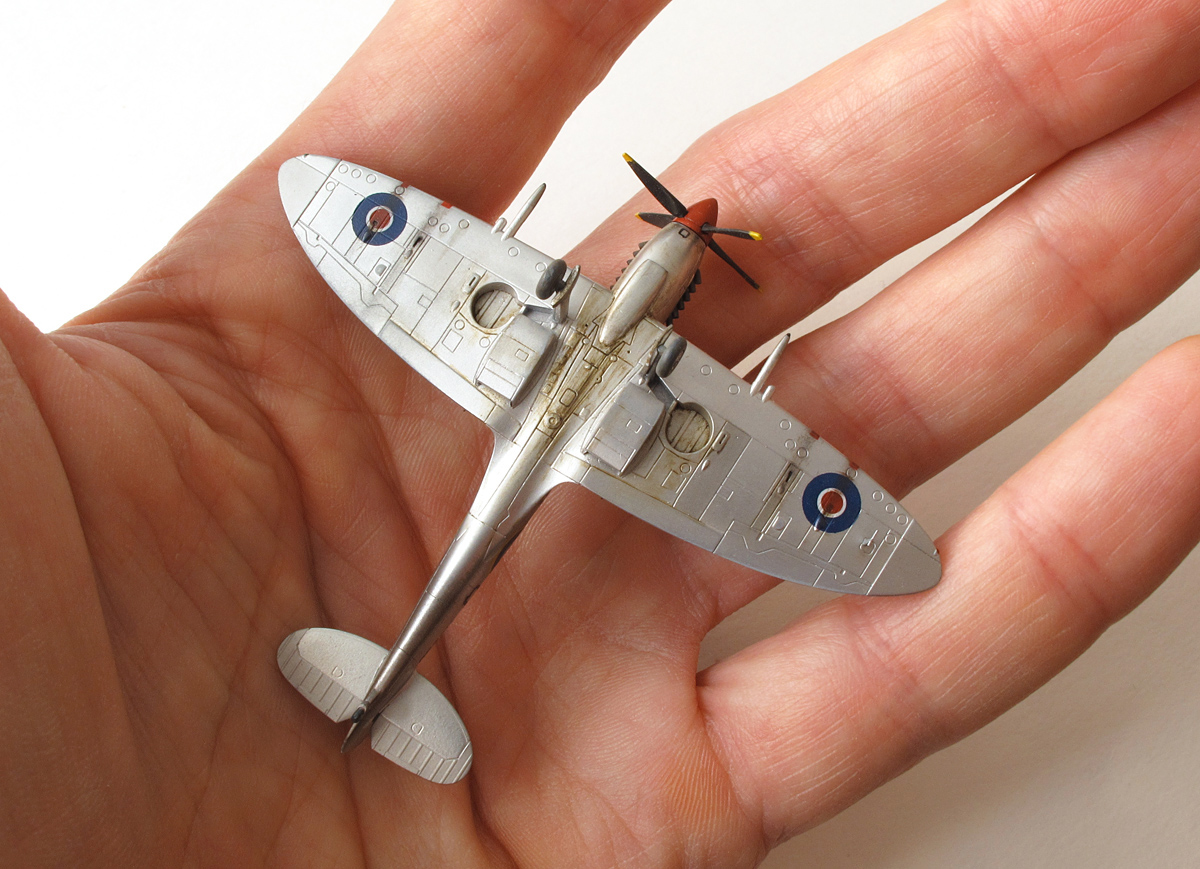