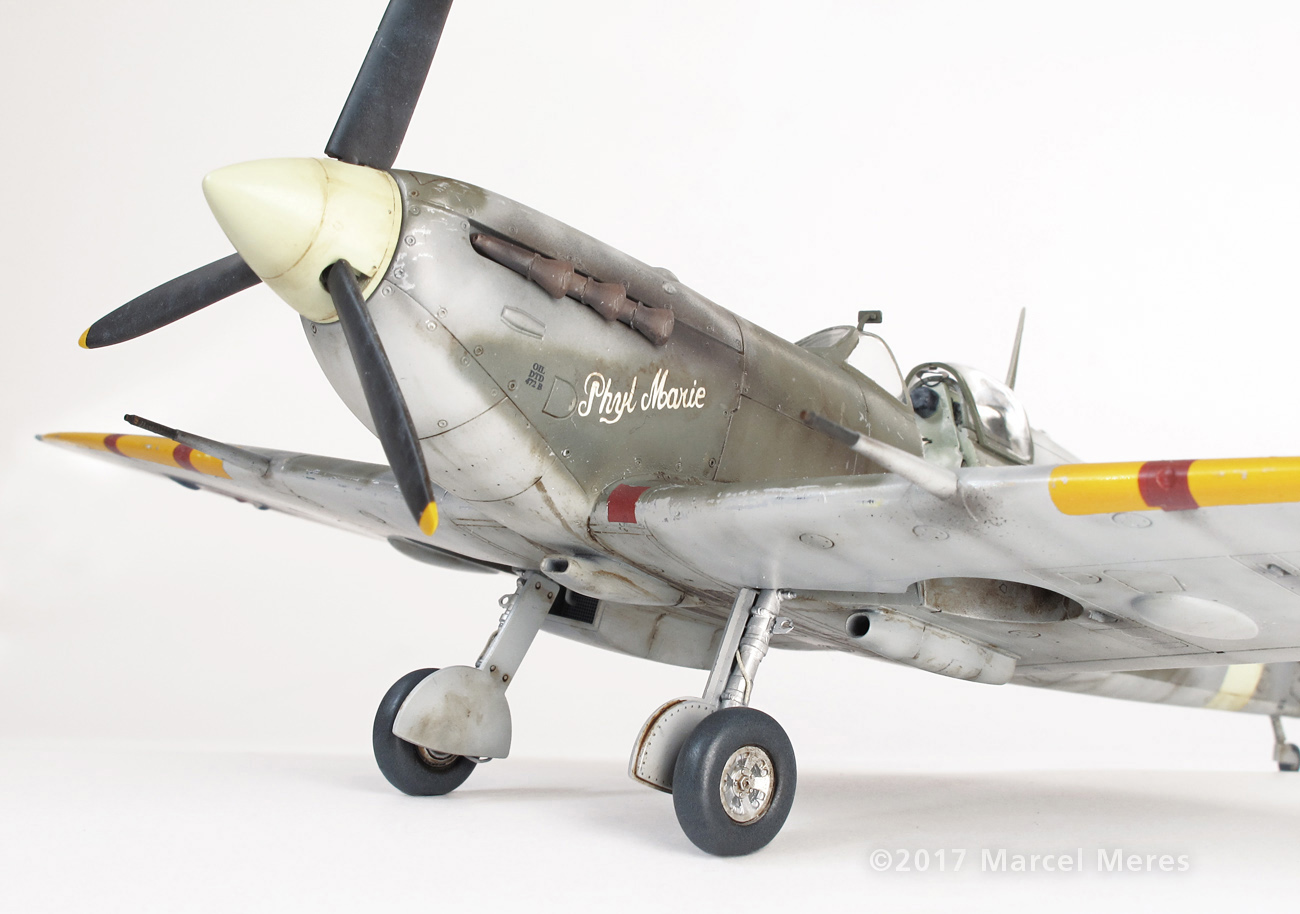 This TAMIYA kit basically served as some kind of a test platform to me. I wanted to try out the worn/chipping method using a common chipping fluid with Mr. Color C paints – so not in combination with the water soluble paints for which this process is broadly exerted and known as suitable. As you can read later, the “C” combination worked surprisingly well too. 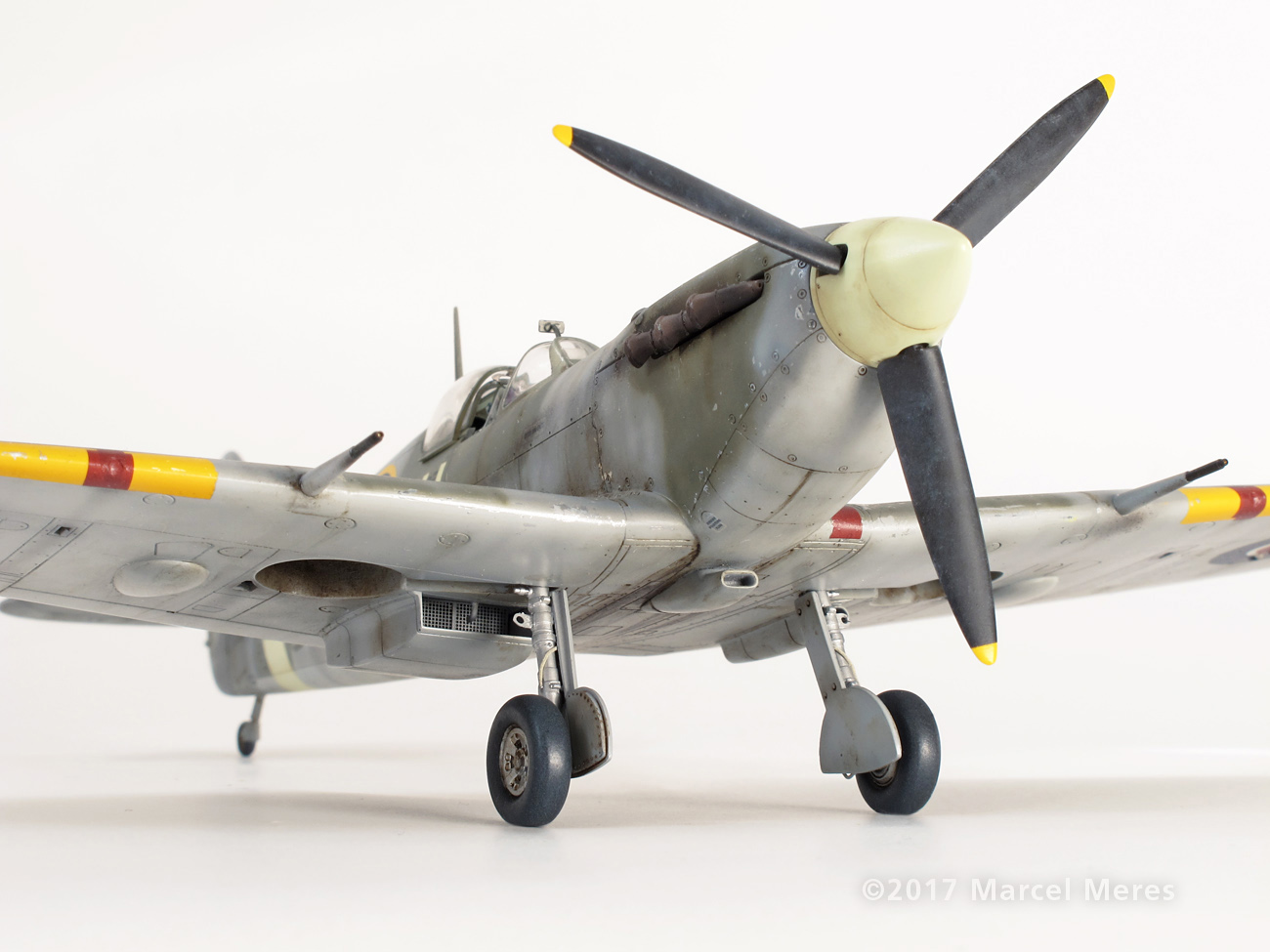 You would surely agree the TAMIYA Spitfire is a well-known kit. It was described many times  as a pleasantly simple, well buildable, relatively cheap and – excusing some minor shape inaccuracies (typical for some older planes from this producer) – a kit looking  like a Spitfire. Essentially I agree with it too. And as I always want to enhance something by adding some details – thus again, several after-market sets were added plus my own add-ons. Here is what was made: 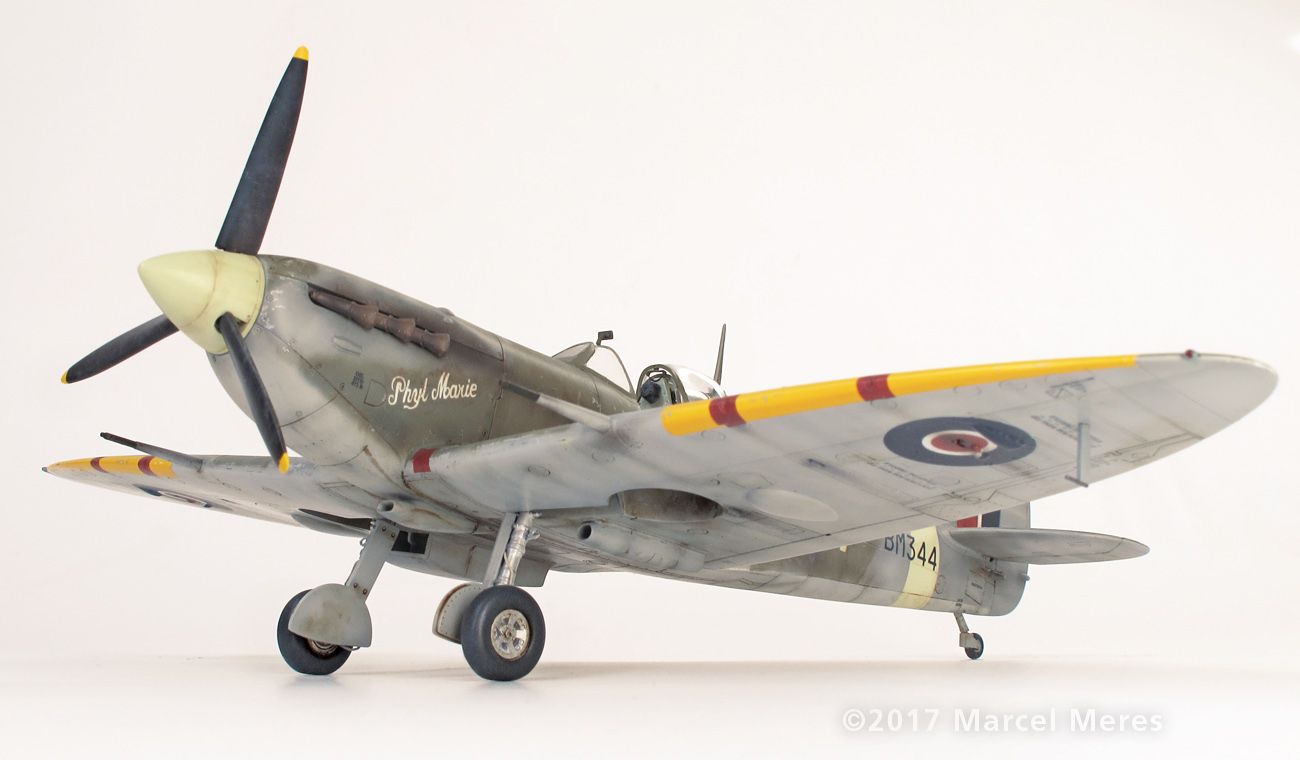 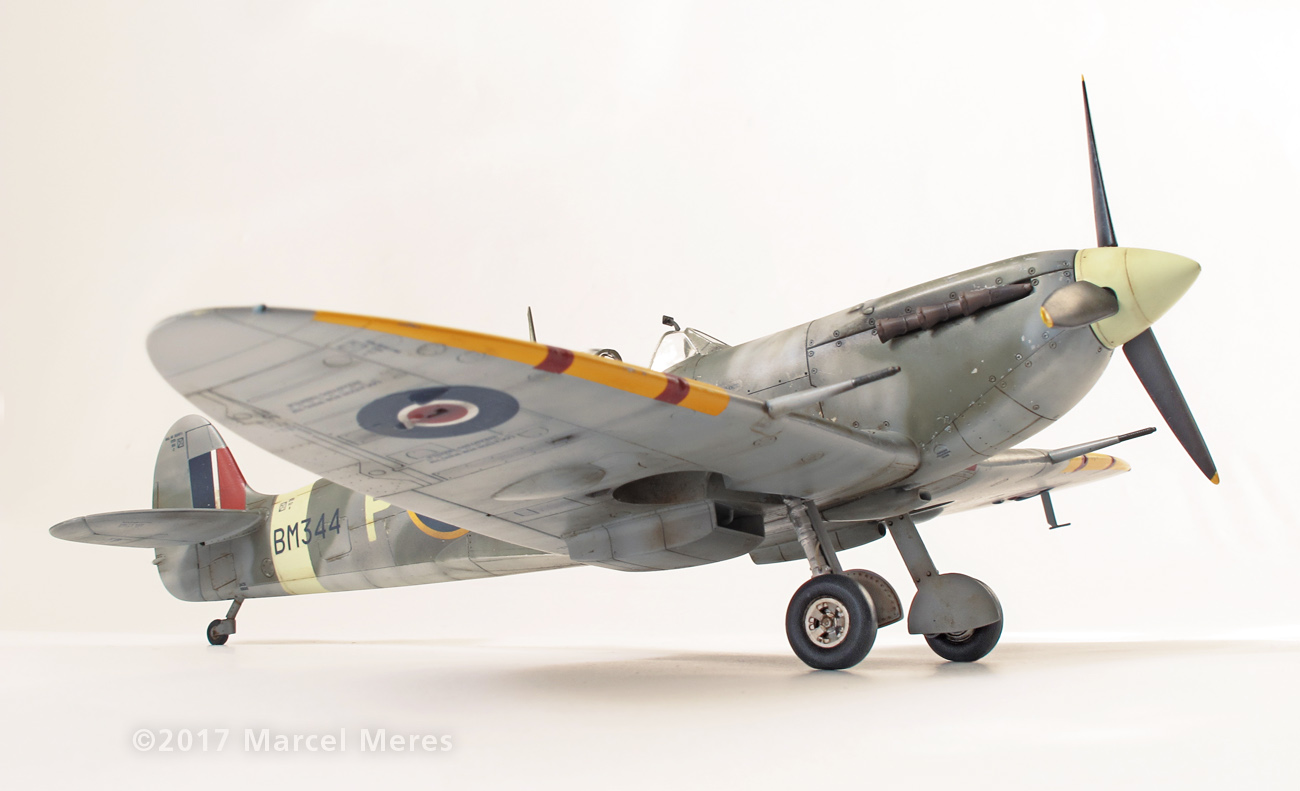 My Spitfire represents the machine BM344 named Phyl Marie. It was flown by Syd Ford, the Squadron Leader of the 403 (Canadian) Squadron, Manston during August 1942. BM344 provided air cover to the ill-fated Dieppe raid (Operation Jubilee) on 19 August 1942. For my Phyl Marie the Aero Master decals #48-682 were used while the large KH ● P letters were airbrushed. 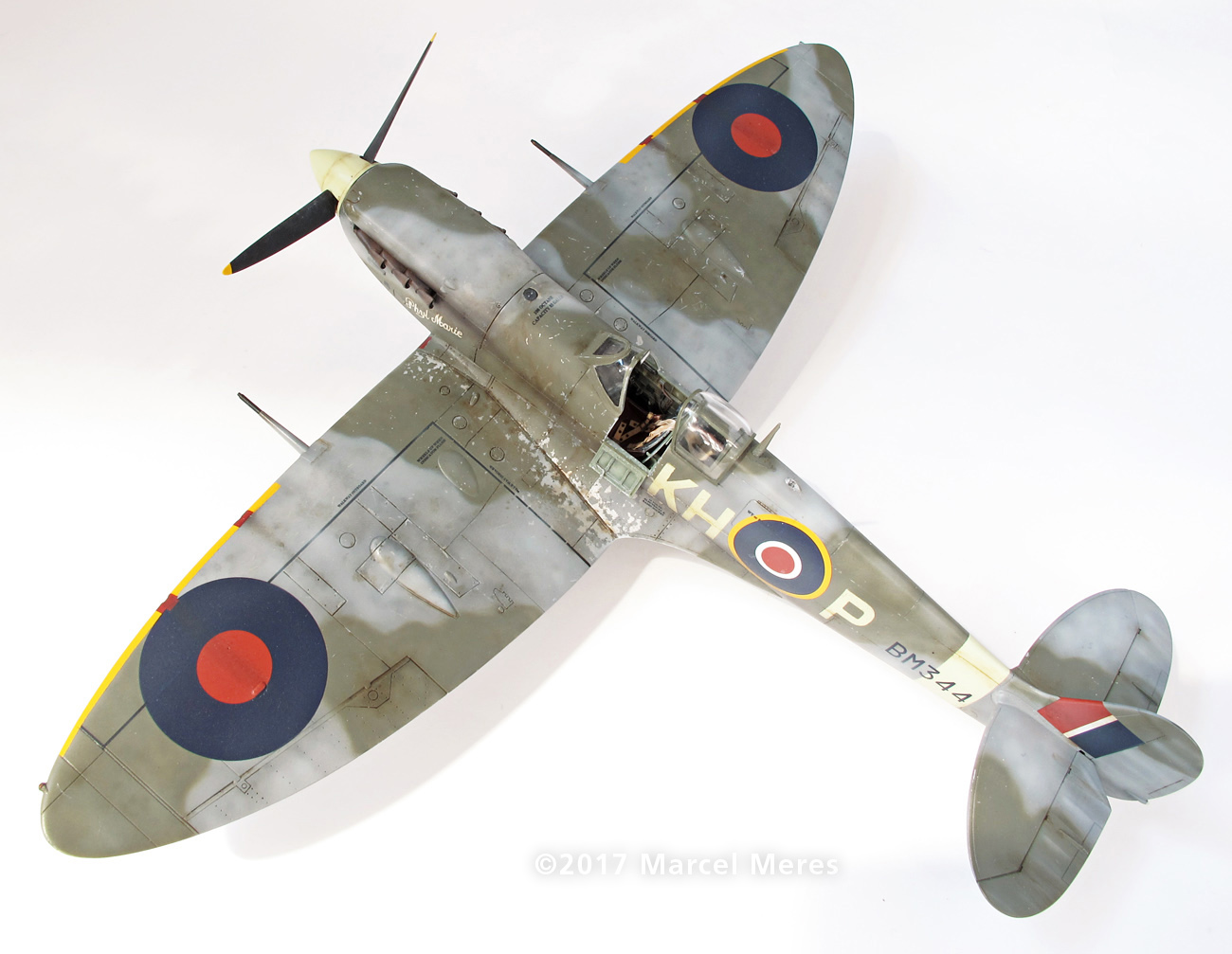 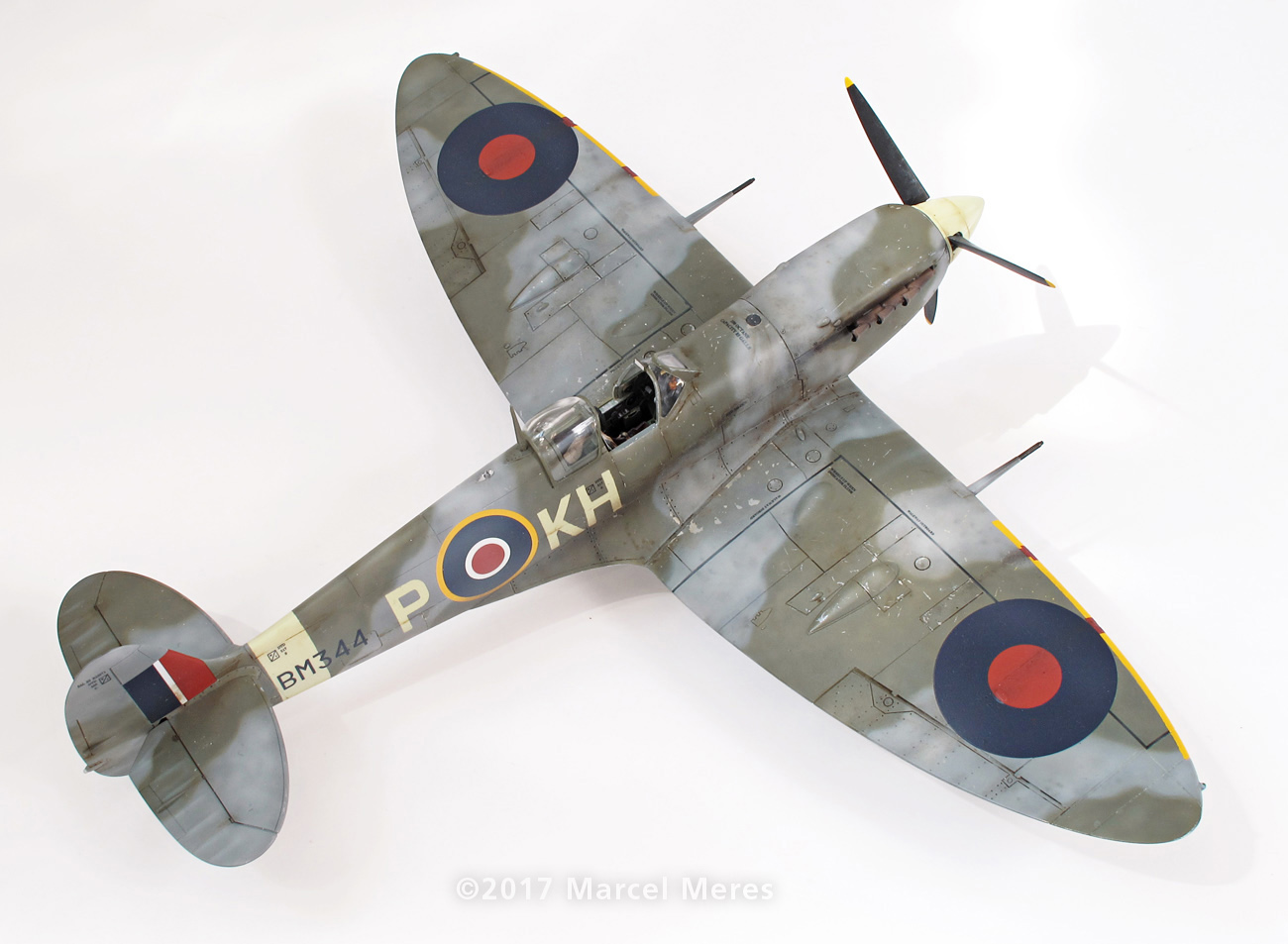 Both the fuselage bar and the code lettering were sprayed on a white base, prior to the camo colors application. They were masked using home-made masks. The masks were drawn as vector curves according to the pre-scanned Aero Master decal sheet. Drawings were then sent as PDF file to a signmaking studio to let them cut out masks from an adhesive foil. 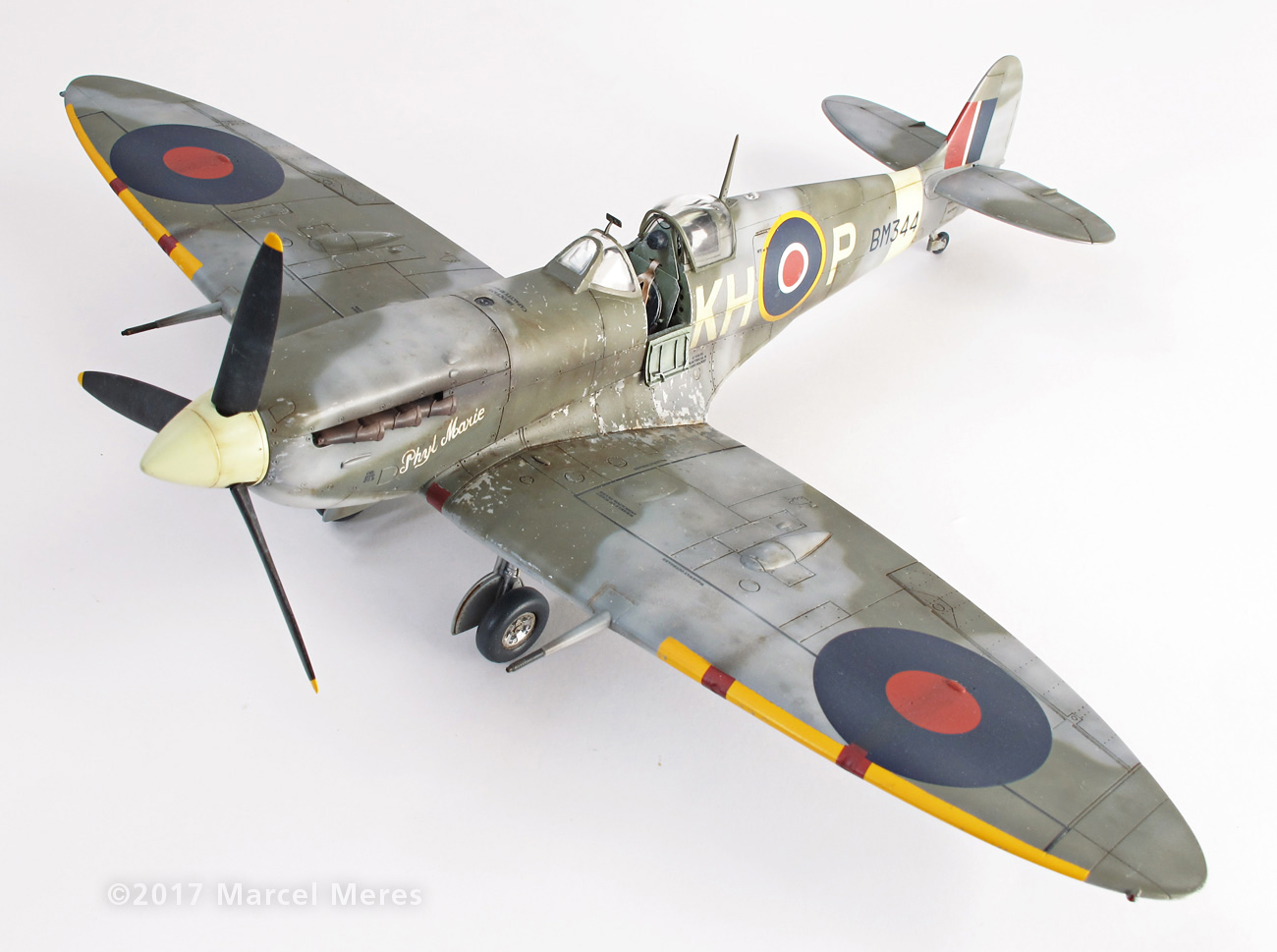 Both masks for the wing leading edge yellow bars were cut by hand. I draw the mask shape directly onto the pre-scanned TAMIYA painting guide, then printed it – the painting guide in 1:1 scale is attached to the kit instructions by the way. The yellow bars were then masked-out and airbrushed.  A simple way to make such masks can be seen on the following picture: 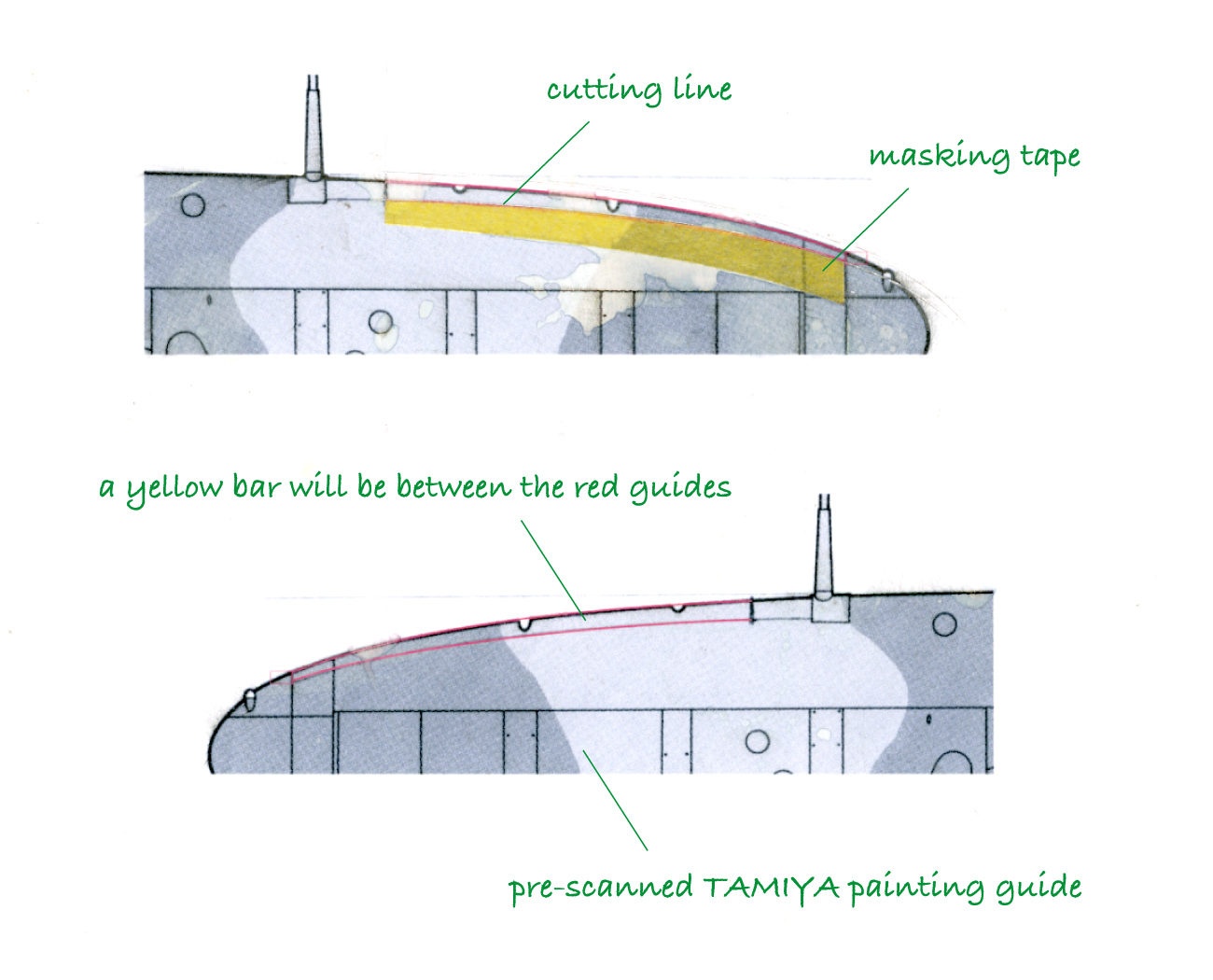 Red tapes covering the wing gun openings and the gun camera window are decals. They were cut-out from the original TAMIYA leading edge bar decal and trimmed into the narrower stripes. I tried to simulate the effect of multiple tapes applied overlapping  each other: 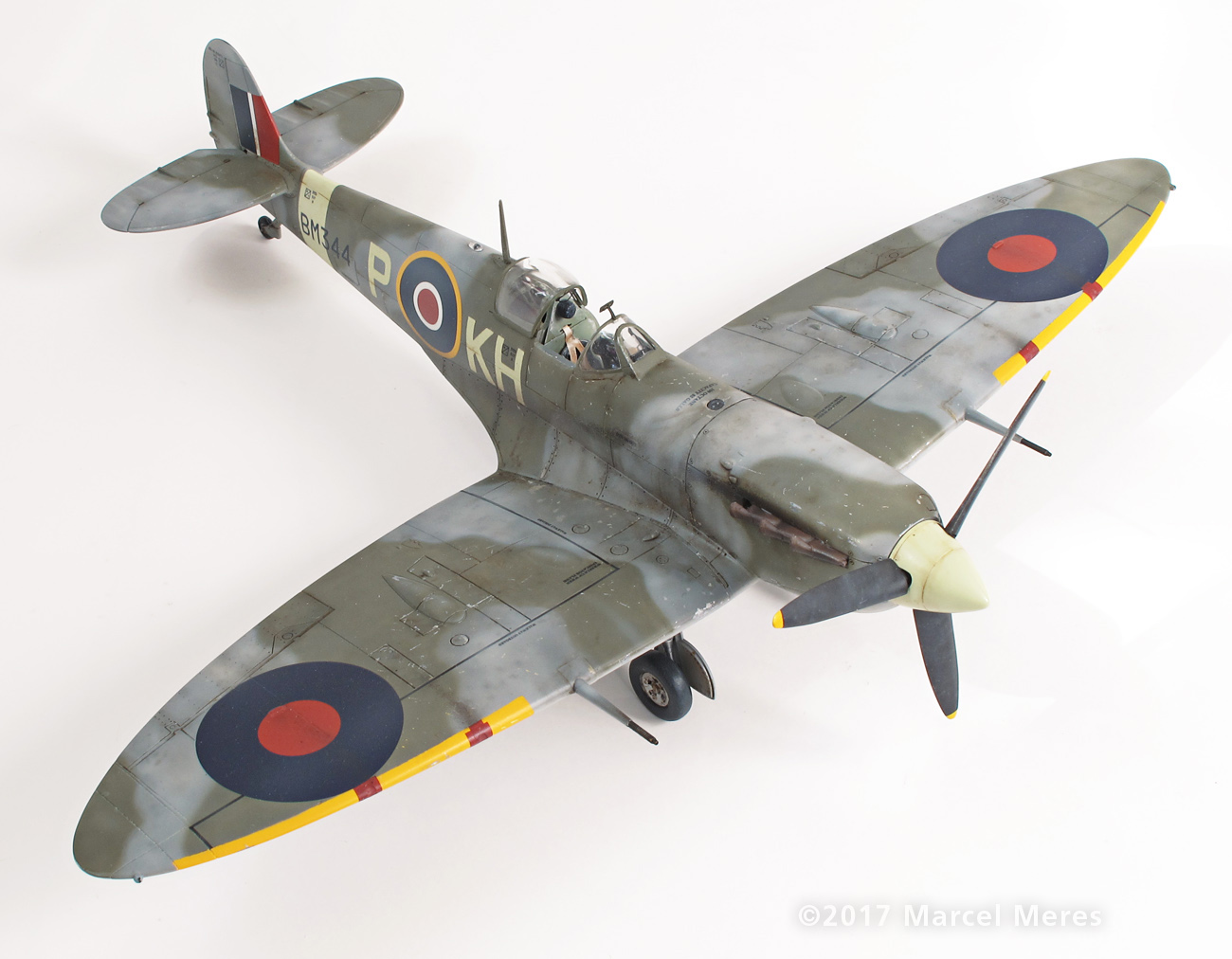 Many Mk.V Spitfires used to serve a long time enough to be heavily weathered. As I have not seen any photograph of Phyl Marie depicting her from above I was able to use only my own feeling, estimation – and the help of WWII era photographs as well.

The color chipping process
Now I’d describe the chipping process mentioned above. Firstly the kit got the base coat of Mr. Surfacer and then the Mr. Color 8 Silver coat onto it. Then multiple thin coats of the chipping fluid were applied to all places where I wished the chipping effect to appear – mainly the upper wing root surfaces and the fuselage sides close to the cockpit. 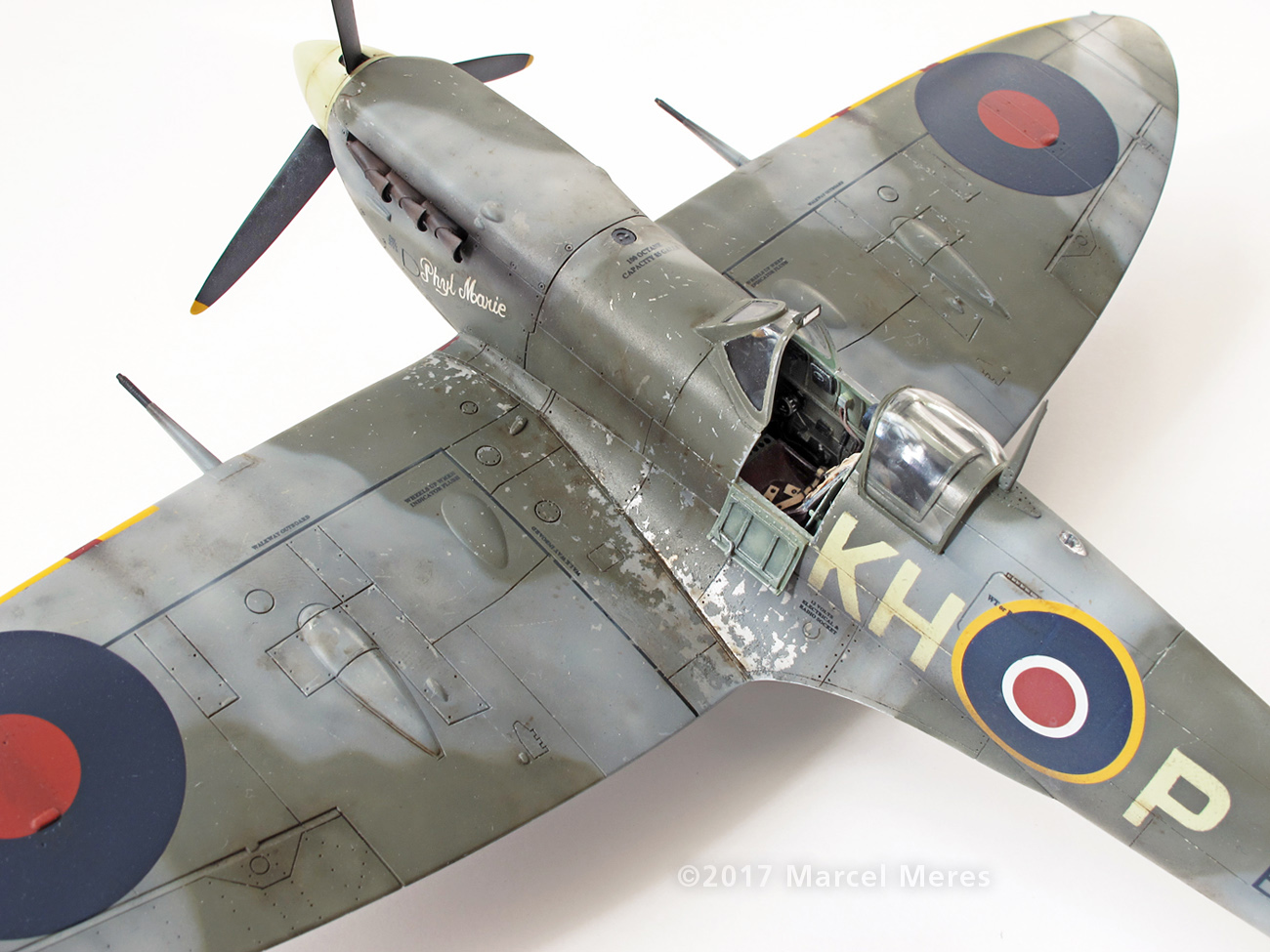 As the camo colors on top were the “C” type as was the underlying silver, I was afraid that the solvent may somehow come through the chipping agent (laying in between them) binding them firmly together with no possibility of chipping. Trying to prevent that I doubled the number of chipping fluid coats recommended (from 3 to 6). And it paid off. With a help of some water the top-lying “C” camo colors came off relatively well. The final result can be seen on attached photographs.

Please note: the tiniest scratches visible all over the plane surfaces were made by a sharp needle tip with no water. 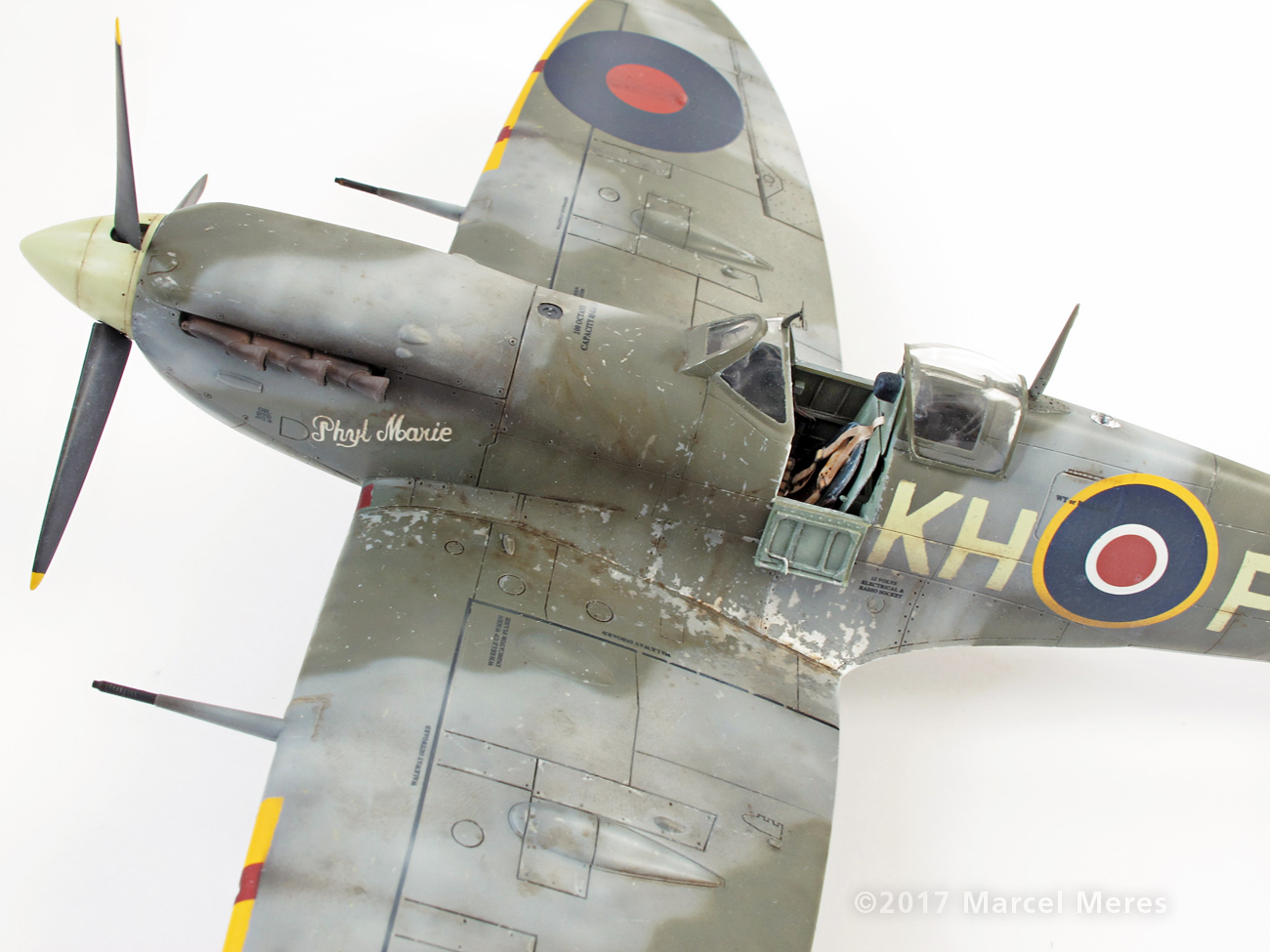 The rest of the weathering was made as usual. Some very subtle pre-shading spots were sprayed with a very dark gray color. Every camo color was sprayed free hand and in multiple delicate layers rather than a single coat. I started spraying with a heavily lightened color. Every camo color was gradually built up using darker and darker shades. I started unevenly alongside the panel lines, then came the rest. Small spots, lines and faint mottles were added during the process. The final goal was to simulate an unequal, weathered surface with a fade-out effect. 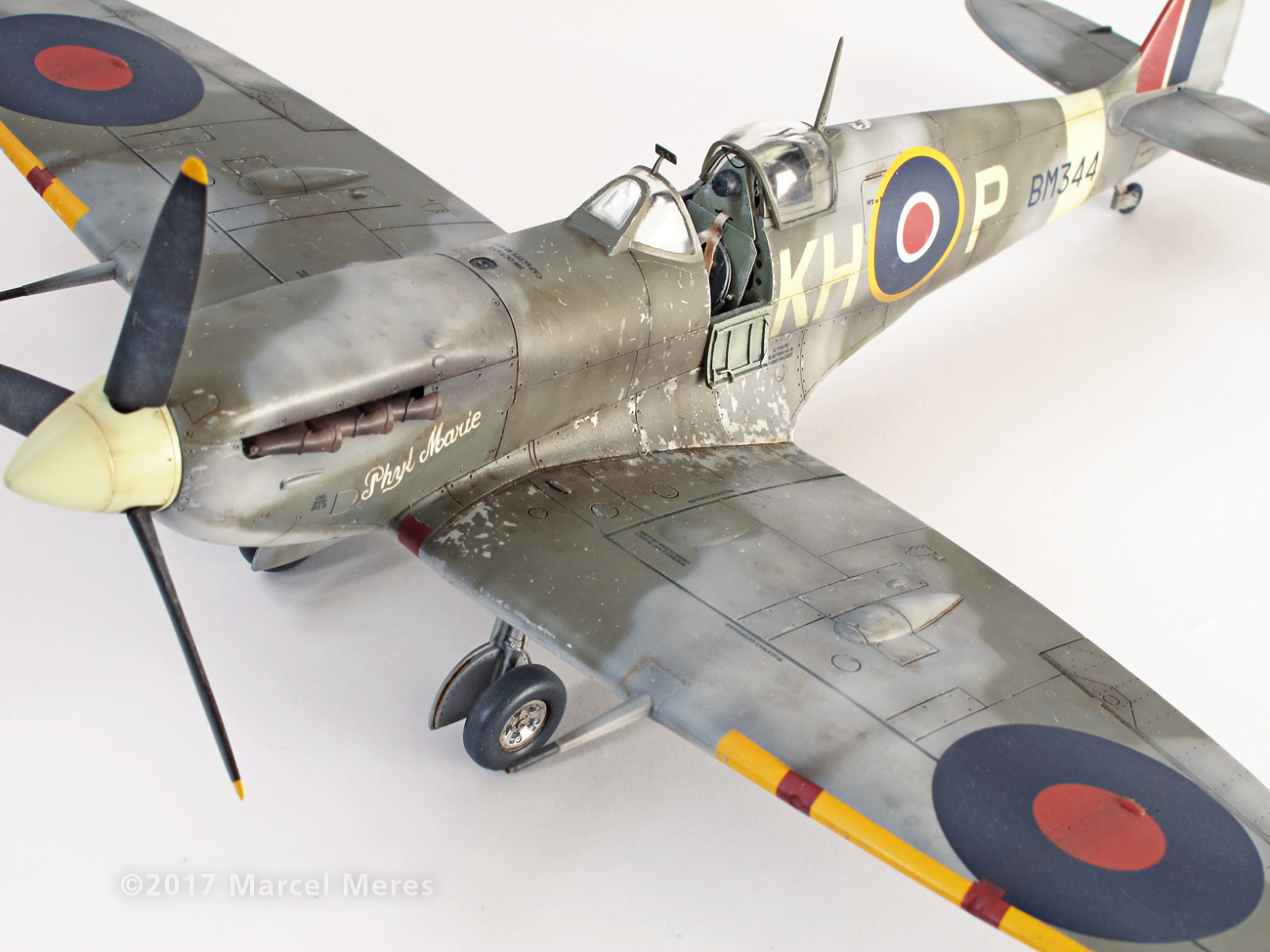 The exhaust and gun stains were airbrushed with a very dark brown shades. Then the whole kit got the Mr. Color Super Clear gloss coat as the base for thr decalling process. The decals were sealed the same way – with another gloss coat. This second one also served as a base coat for weathering mix made of Burnt Sienna (brown) and Payne’s Gray oil colors mixed together and diluted in mig’s Thinner for washes. 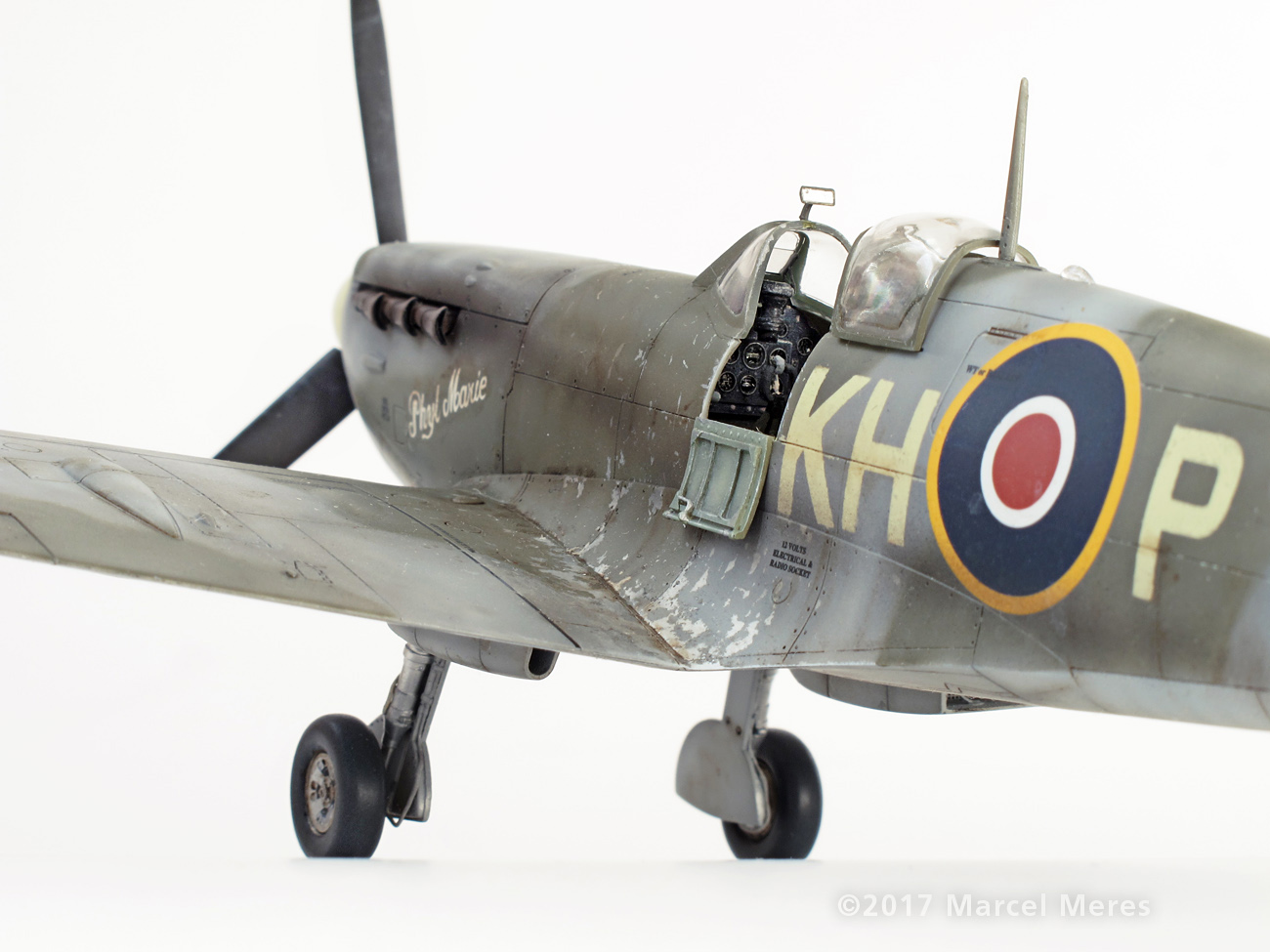 The mix was then applied by a thin soft brush to simulate multiple kinds of dirt/stains. After the wash mix dried out thoroughly the whole kit was sealed with transparent laquer again. This time it was matt.

Since the testing of a chipping process with “C” colors turned out well I am planning to try out the mig’s Heavy Chipping Effects fluid as my next try (with “C” colors again). Another candidate would be the common hairspray which is much more cheaper 😀 .