The Cessna Bird Dog served mainly as liaison and observation airplane and as the FAC (Forward Air Control) during Korean and later Vietnam war. You can find the rich operation history of this small, but hard-working bird by visiting this link. Bird Dog plane is on retirement now but it keeps flying on air shows to these days. I found two nice exhibits resting inside a military hangar at Brumowski Air Basein Austria. Both of them looked like being in flyable conditions: 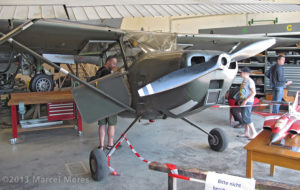 Airplanes were too close to each other to make an allover shot. So we will concentrate onto the details attractive for us – modellers. 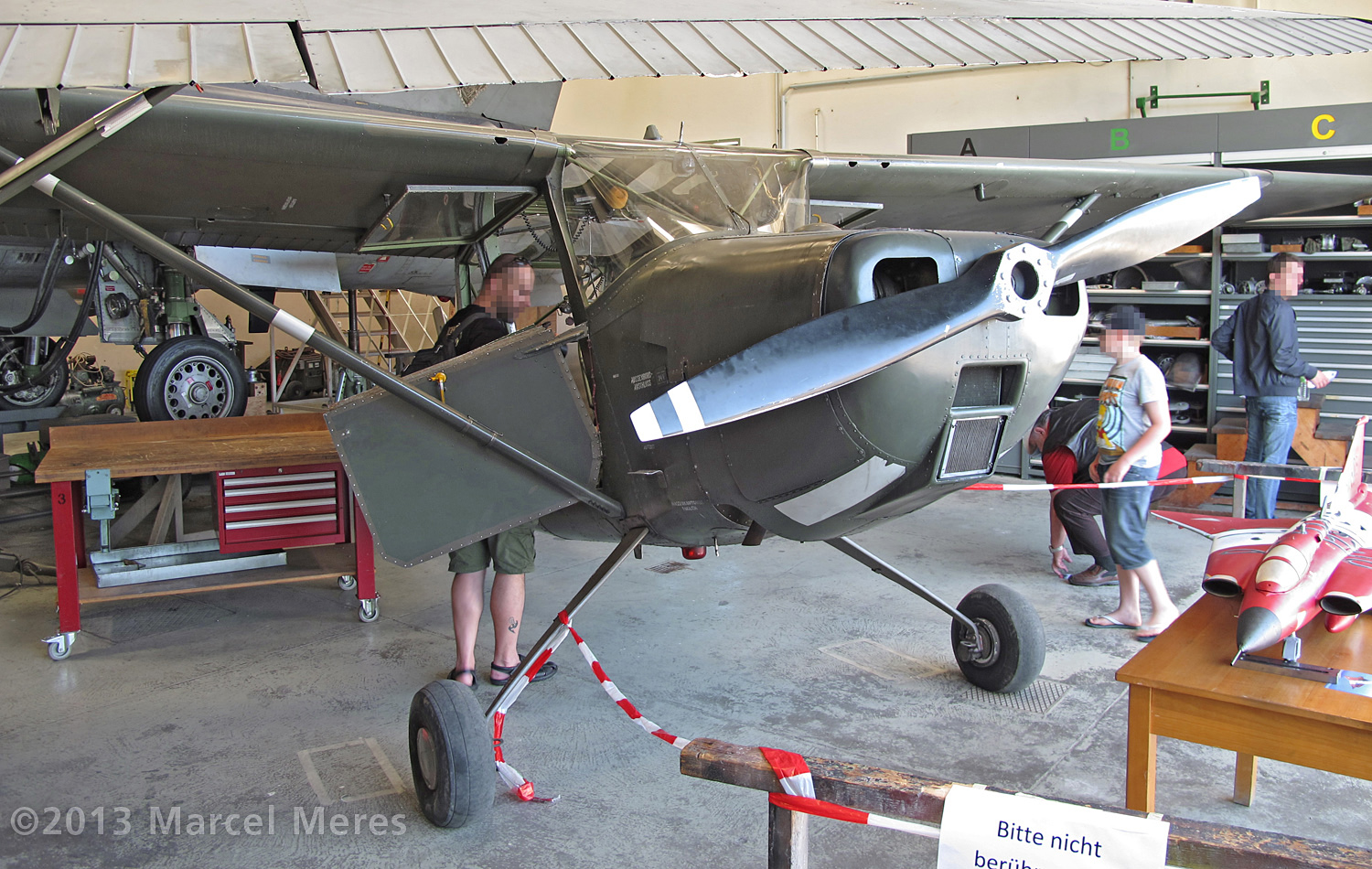 First of all the front view. Please note the subtle-looking undercarriage, the way how the door is hinged (upper picture), openings or maybe air intakes in the wing leading edge plus one landing light here (seen just behind the propeller tip) and more… 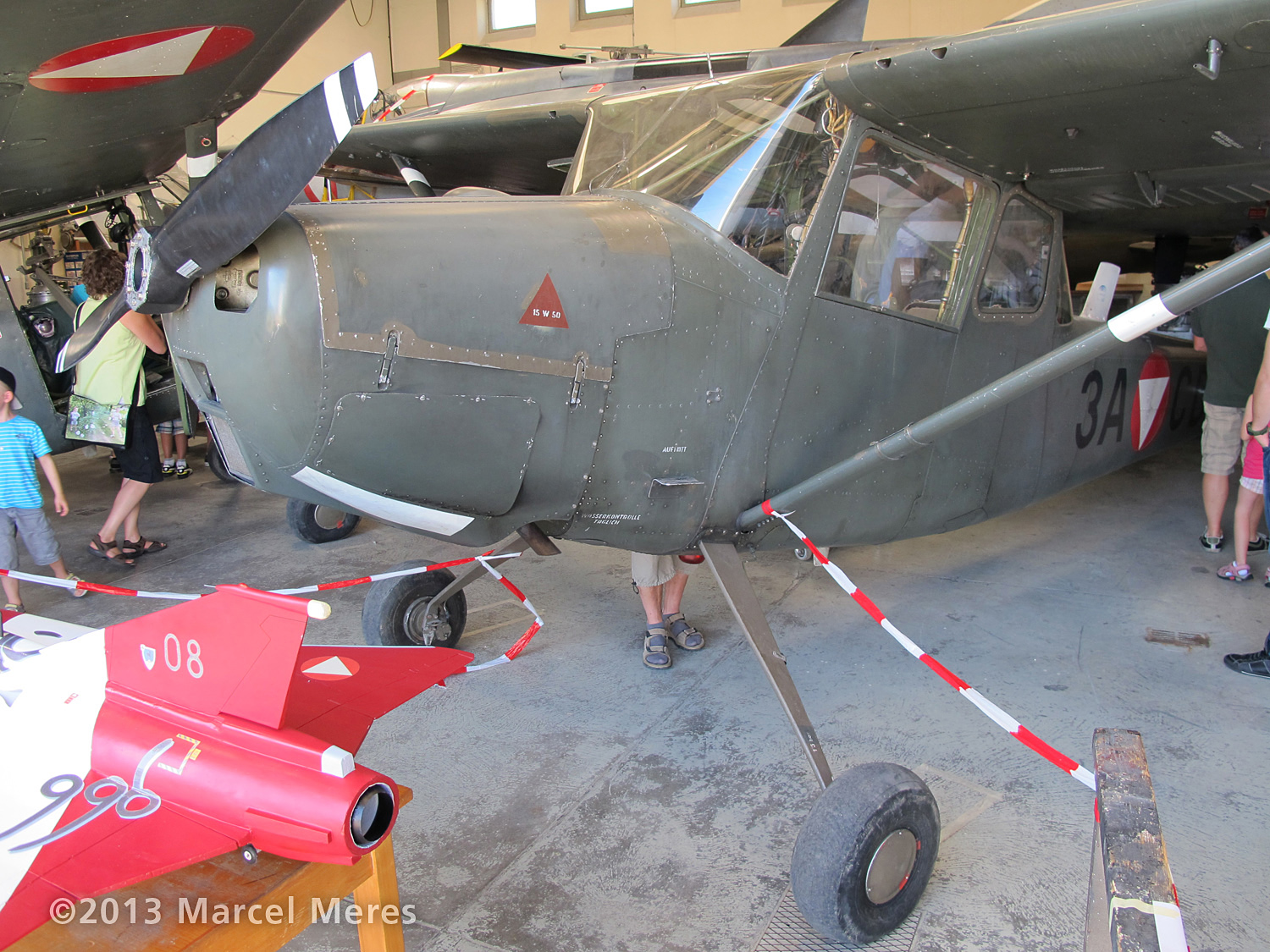 My friend Juraj Bojkovsky sent me his own shot (picture below) which is very similar, but was shot more from the side. Thus the shape of the propeller can be seen even better here: 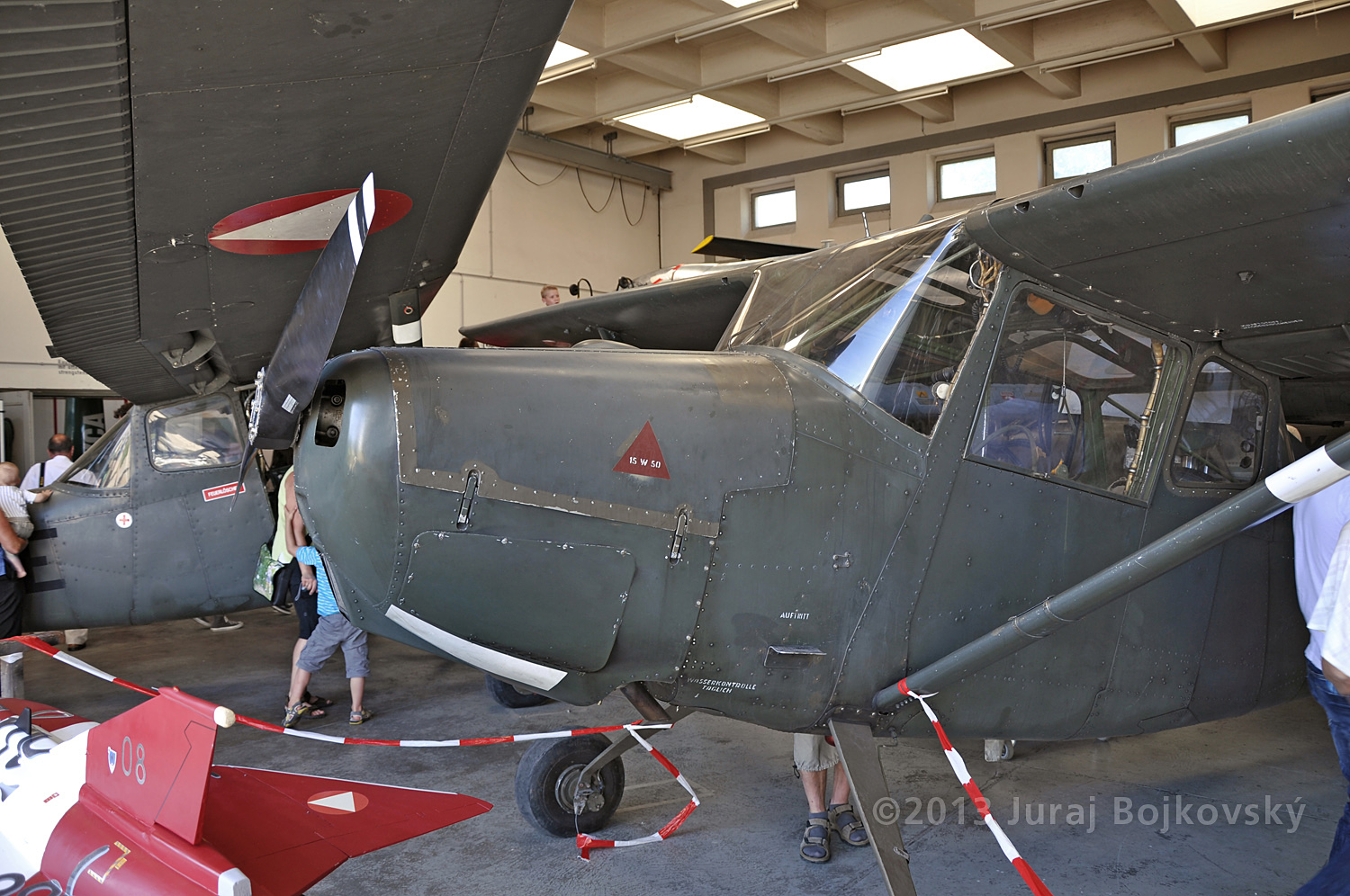 And zooming into his shot… 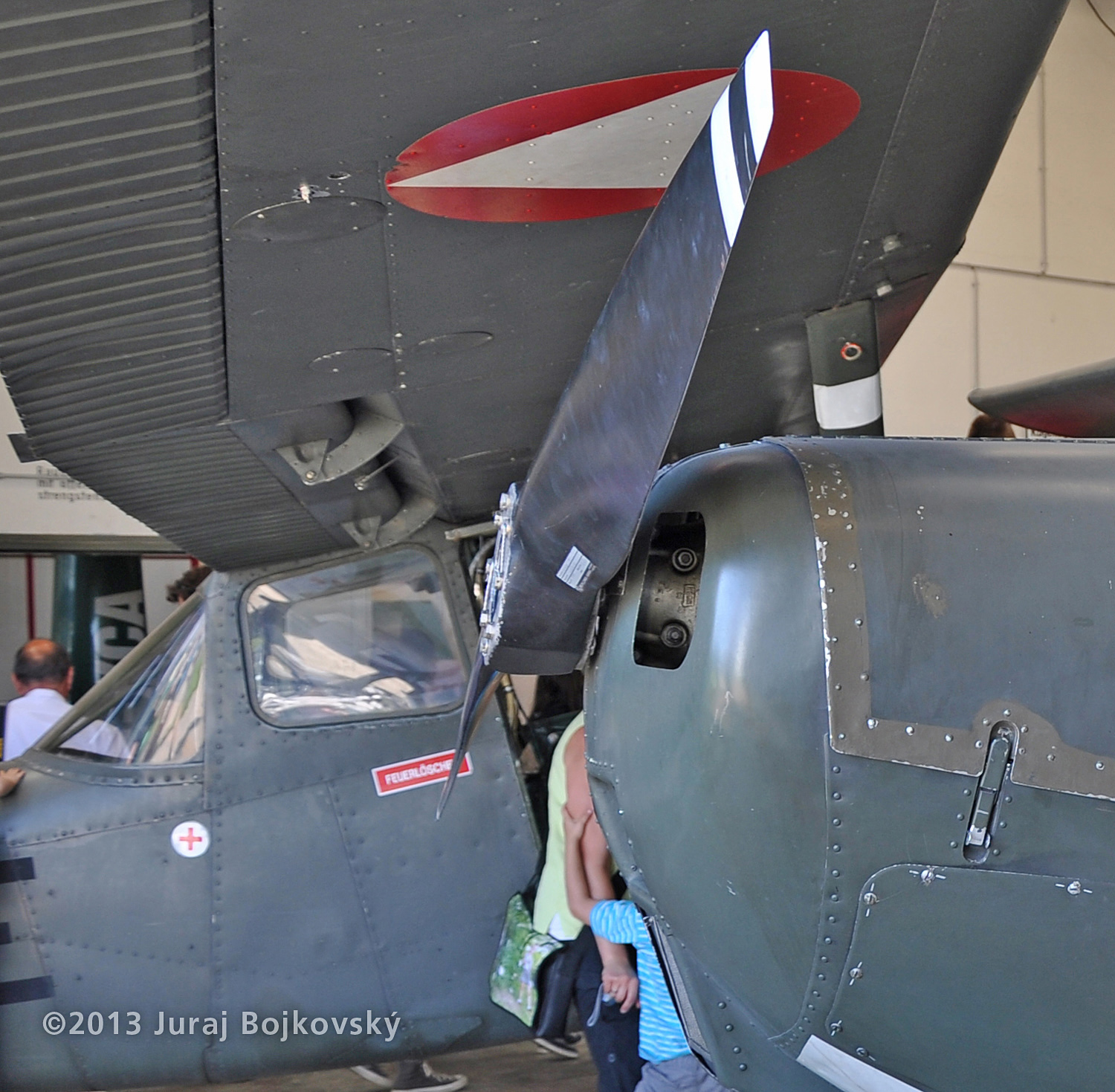 We can also see the landing flap hinges of another Bird Dog standing behind. Please also note the well visible riveting of the whole fuselage skin. This second plane had overpainted cowling and tail sections by more brownish olive “green” shades: 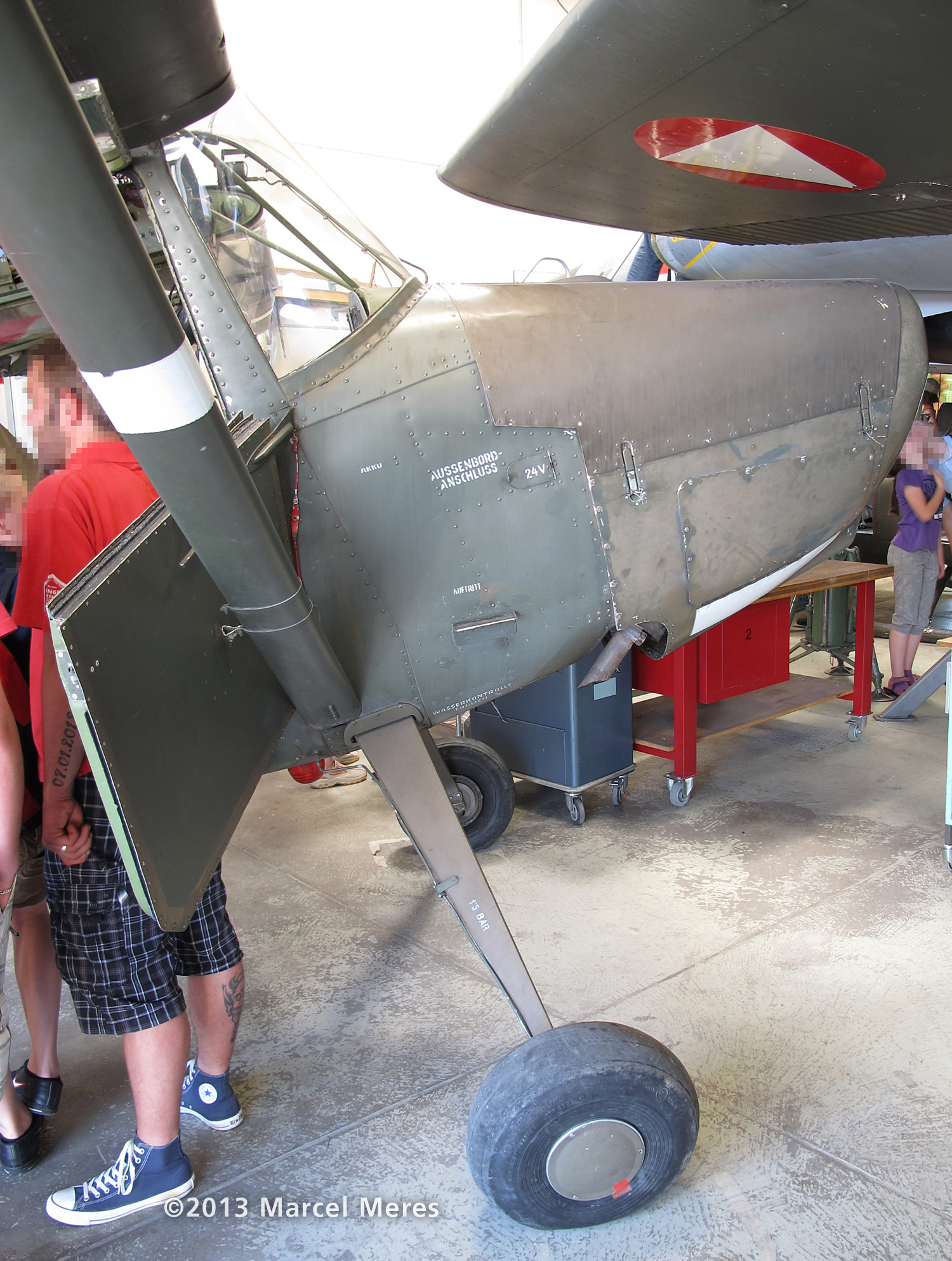 This is the right-hand (starboard) side (upper picture) and the left-hand (port) side (lower picture) of the nose section. Please do not miss the tiny brake tube running along the undercarriage leg (seen above) and a small bump on top of the cowling (better seen below). 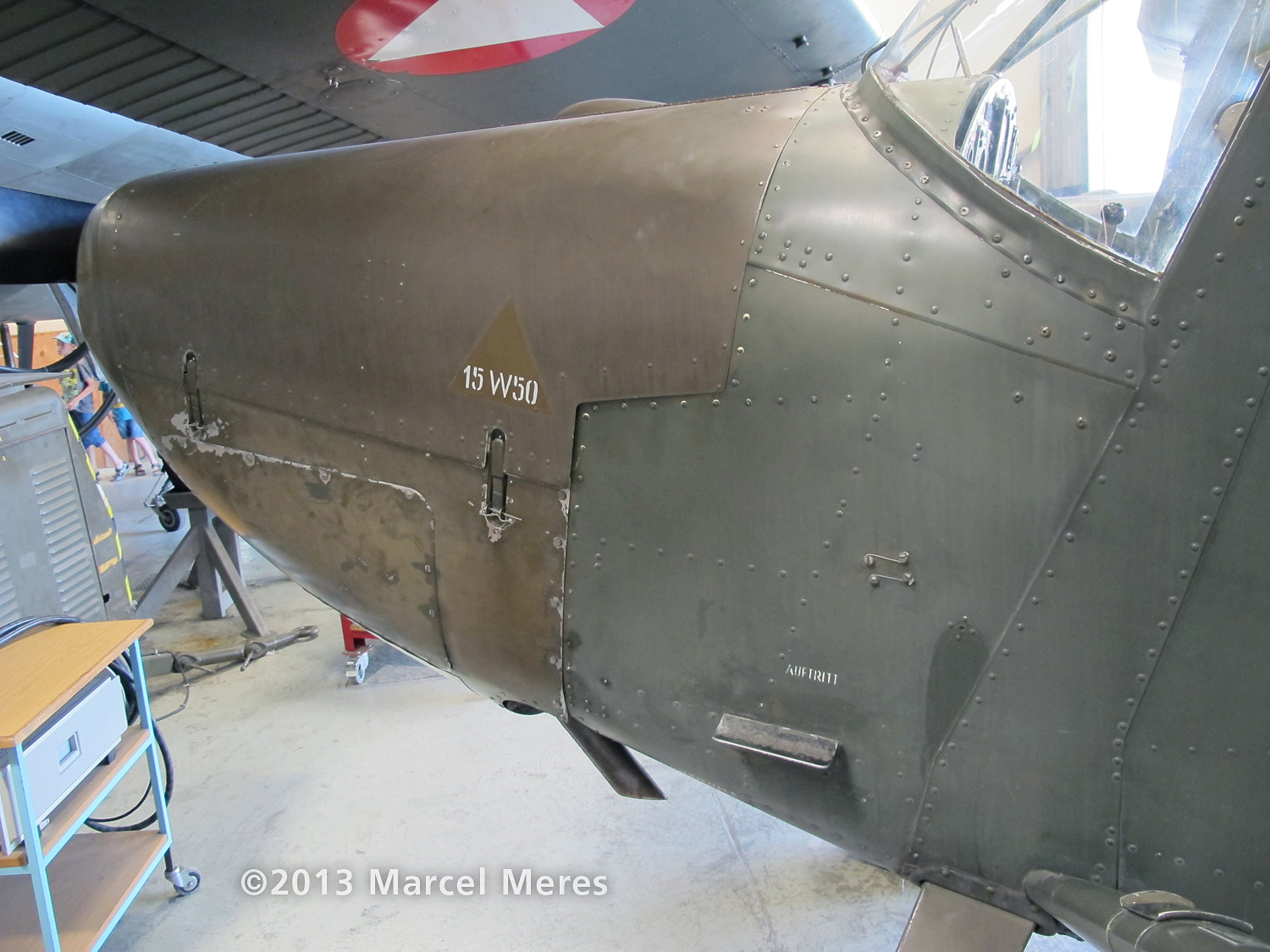 If you wanted to clean the front canopy window, you would probably stand on the tiny foot step, holding this hand-grip (picture below): 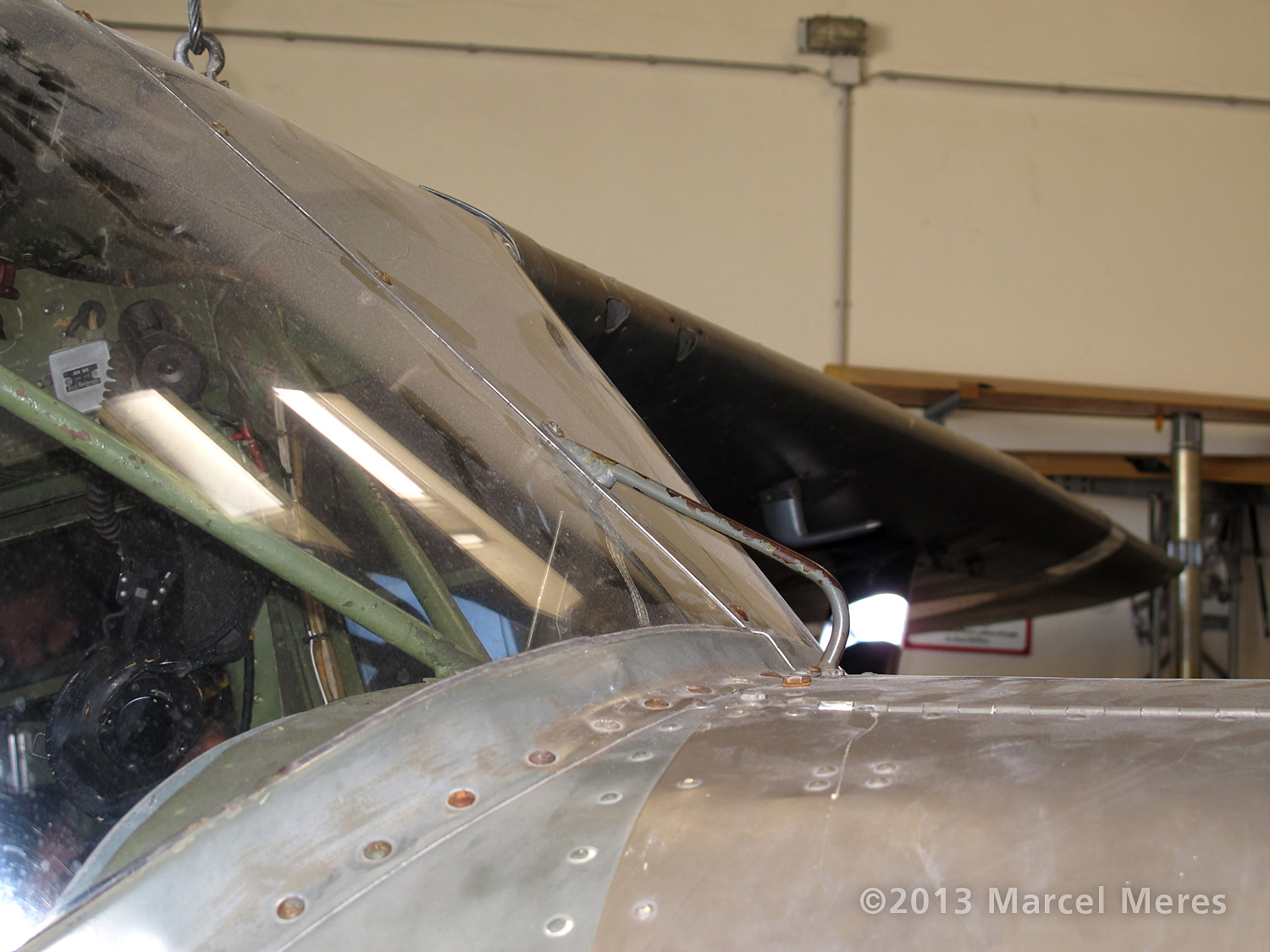 Please also note the light green tubes behind the window – serving as a frame reinforcement. They will be better seen on the cockpit pictures later below…

Now we can go further towards the tail. 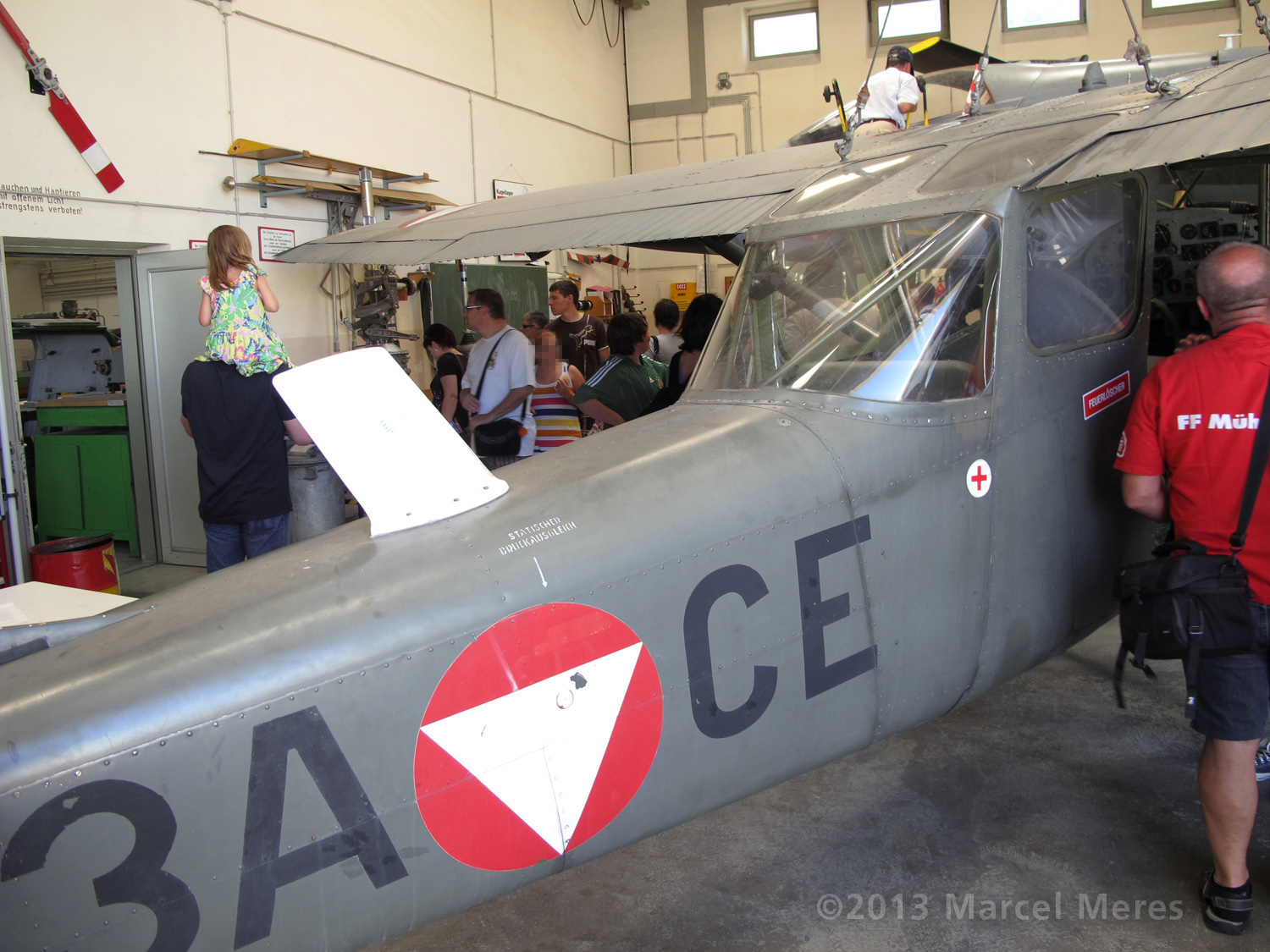 The all-metal wing with the aileron and flap structure is well visible here (lower picture). 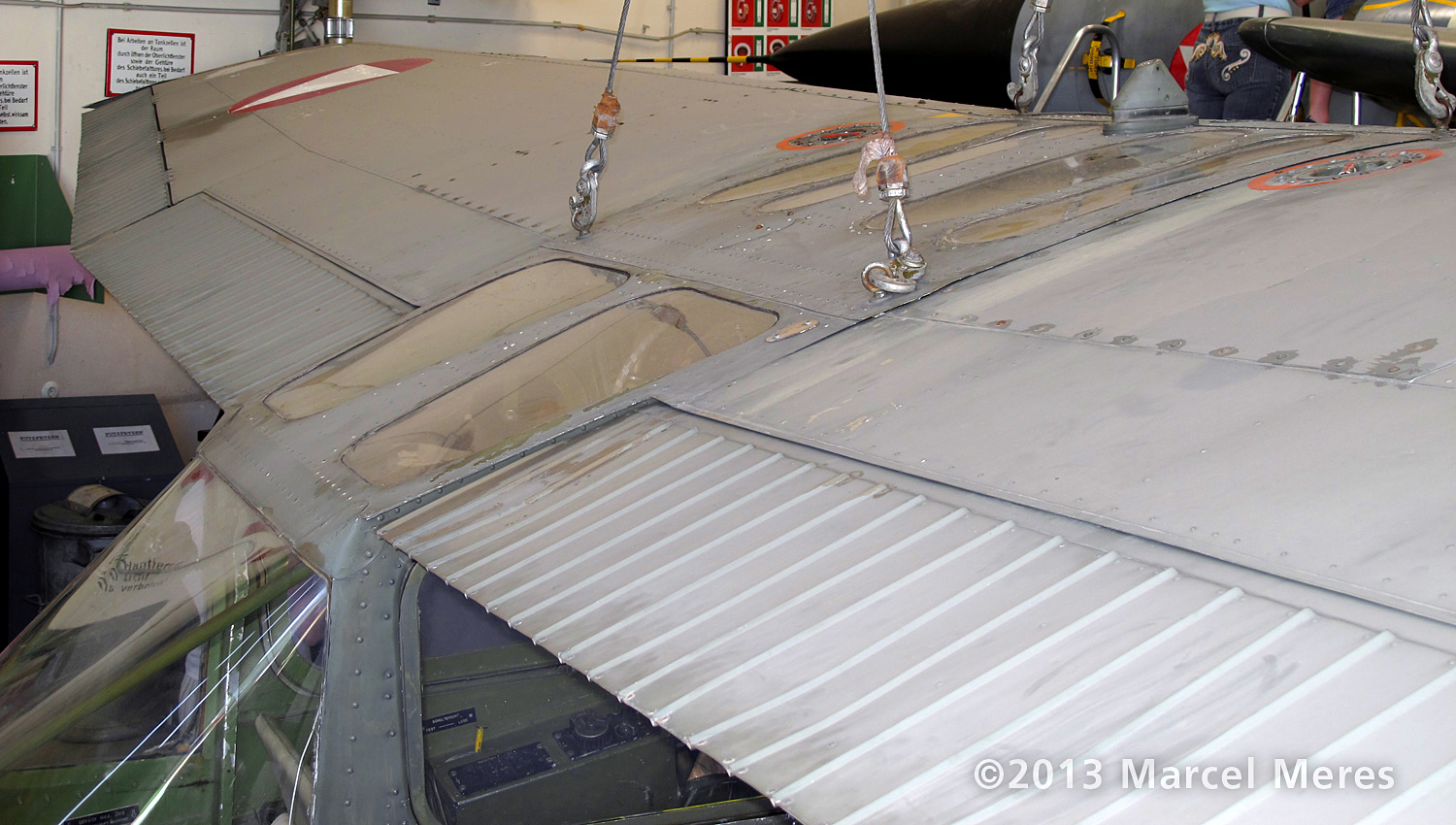 Following pictures show the tail section with a typical metal structure of all the moving surfaces. Typical antennae, tail position lights and the tail undercarriage details are well visible here too: 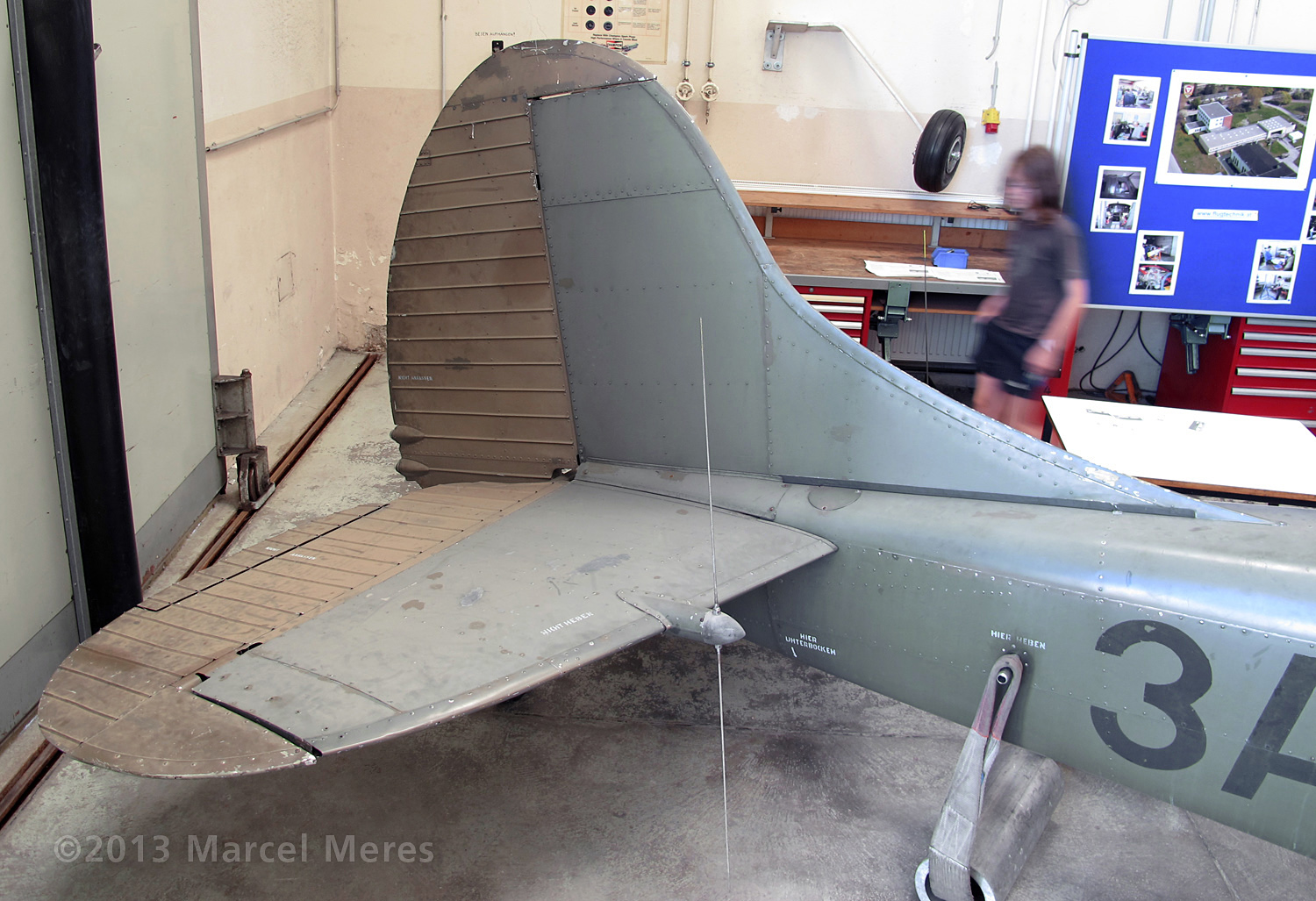 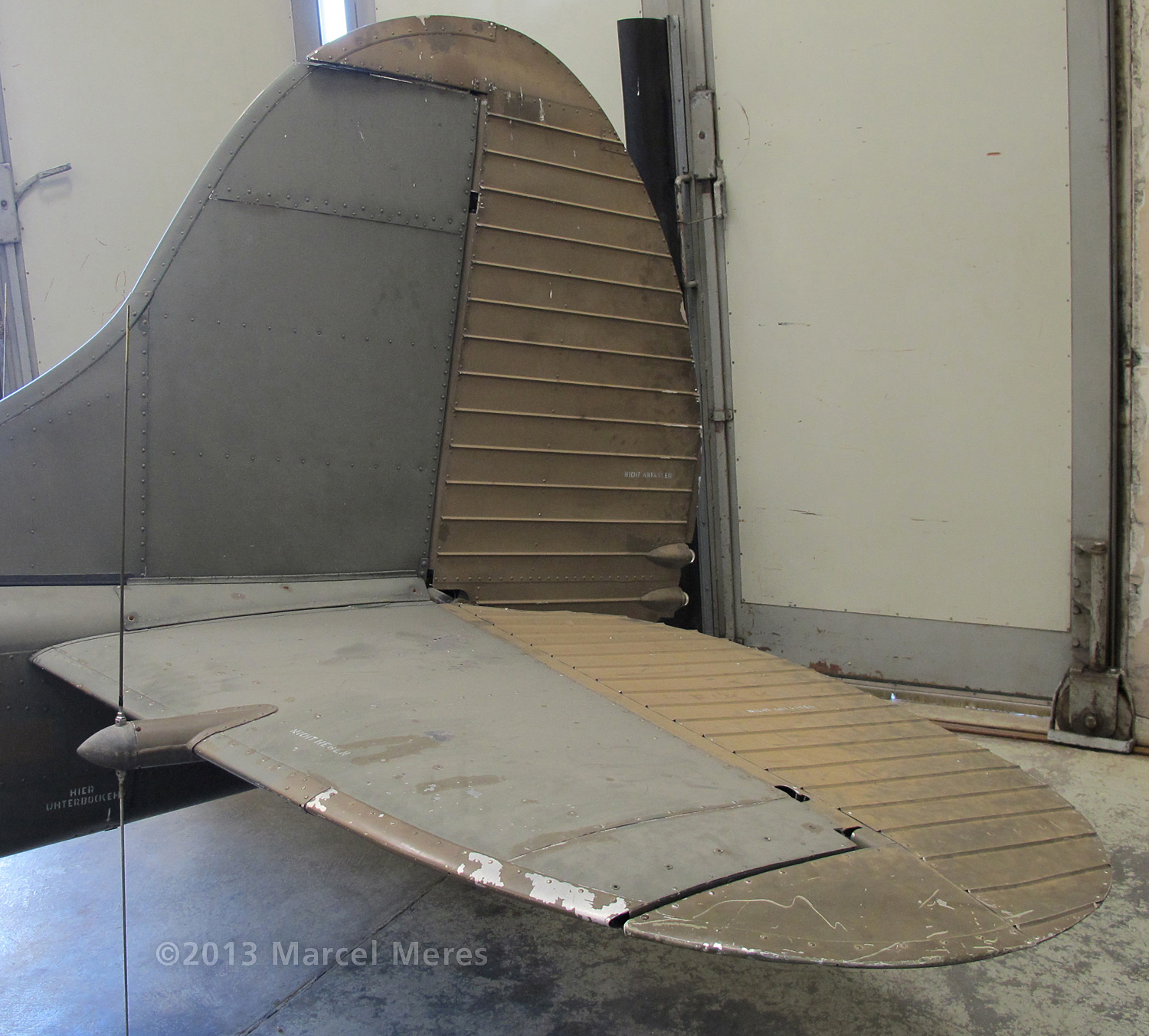 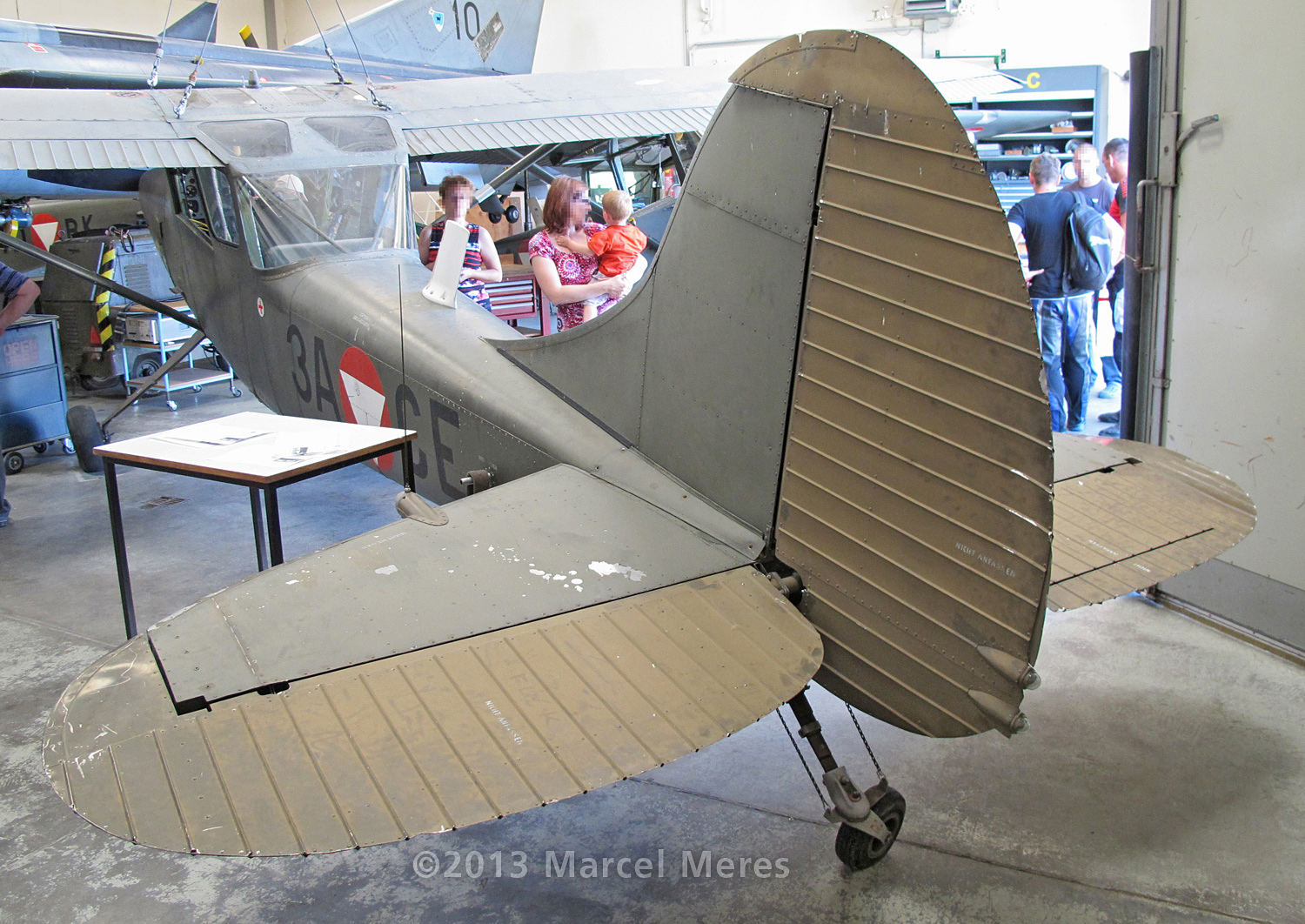 The cockpit door is open so let’s go inside… 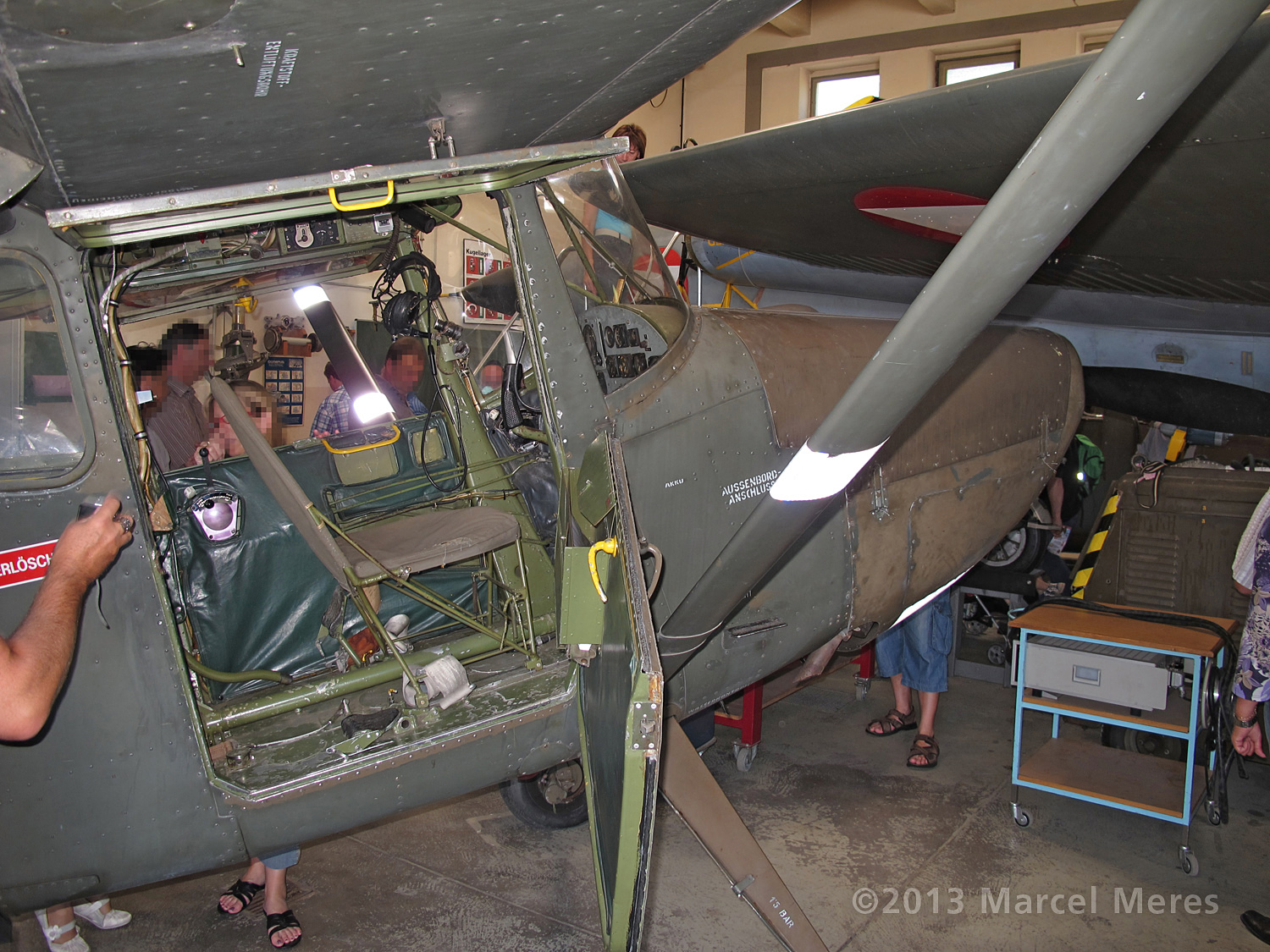 Bird Dog is a two-seater plane with its crew sitting in tandem. This is the pilot’s office: 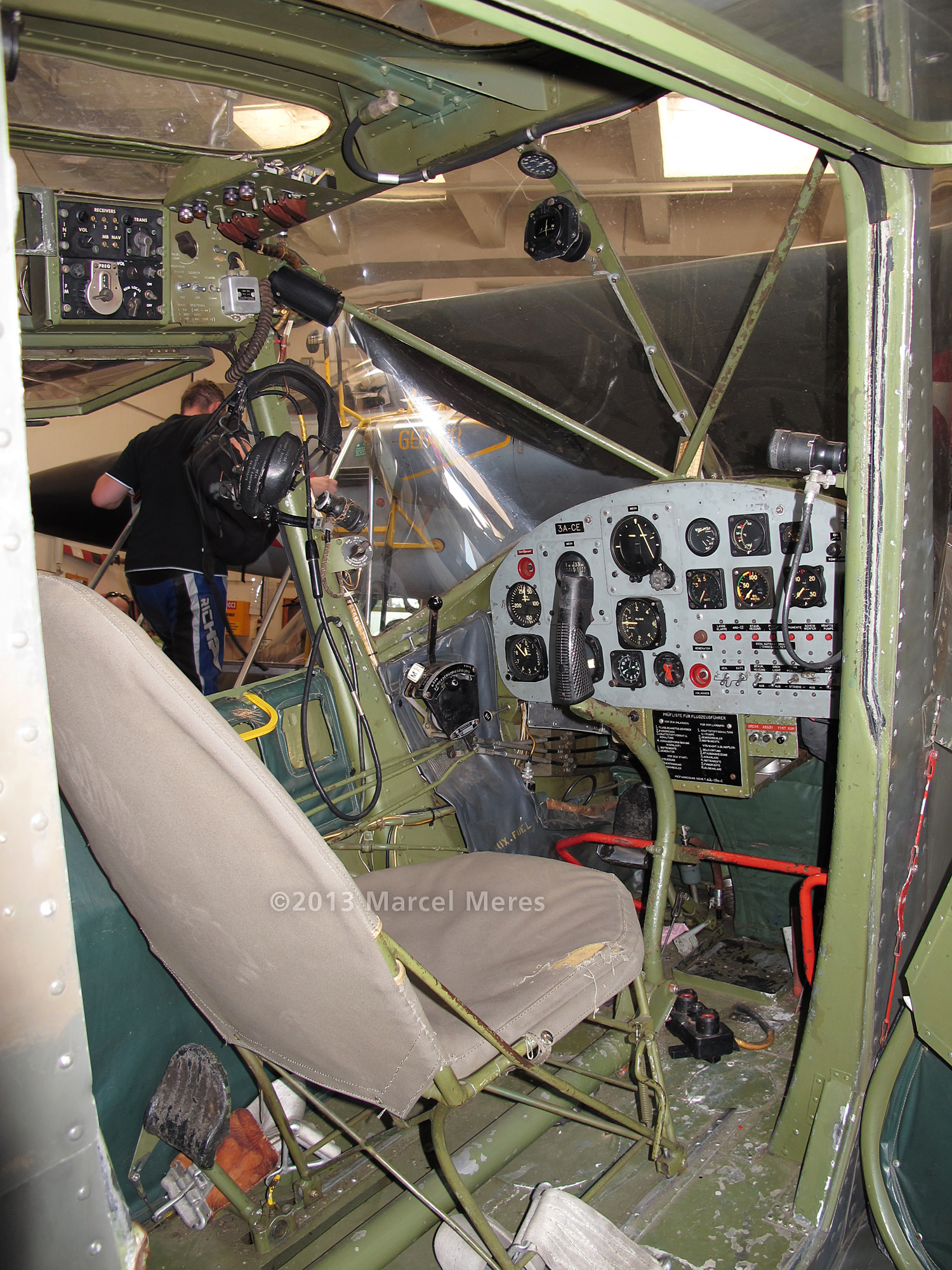 The pilot seat has a very light camping-like metal frame. There is a rudder pedal of the second member of the crew visible just beneath the pilot’s seat (upper picture).

That thick tube lying on the floor under the seat is the casing for a mechanism connecting and synchronyzing front and rear control sticks. Please also note the way how and where the harness belts are fixated to the floor. 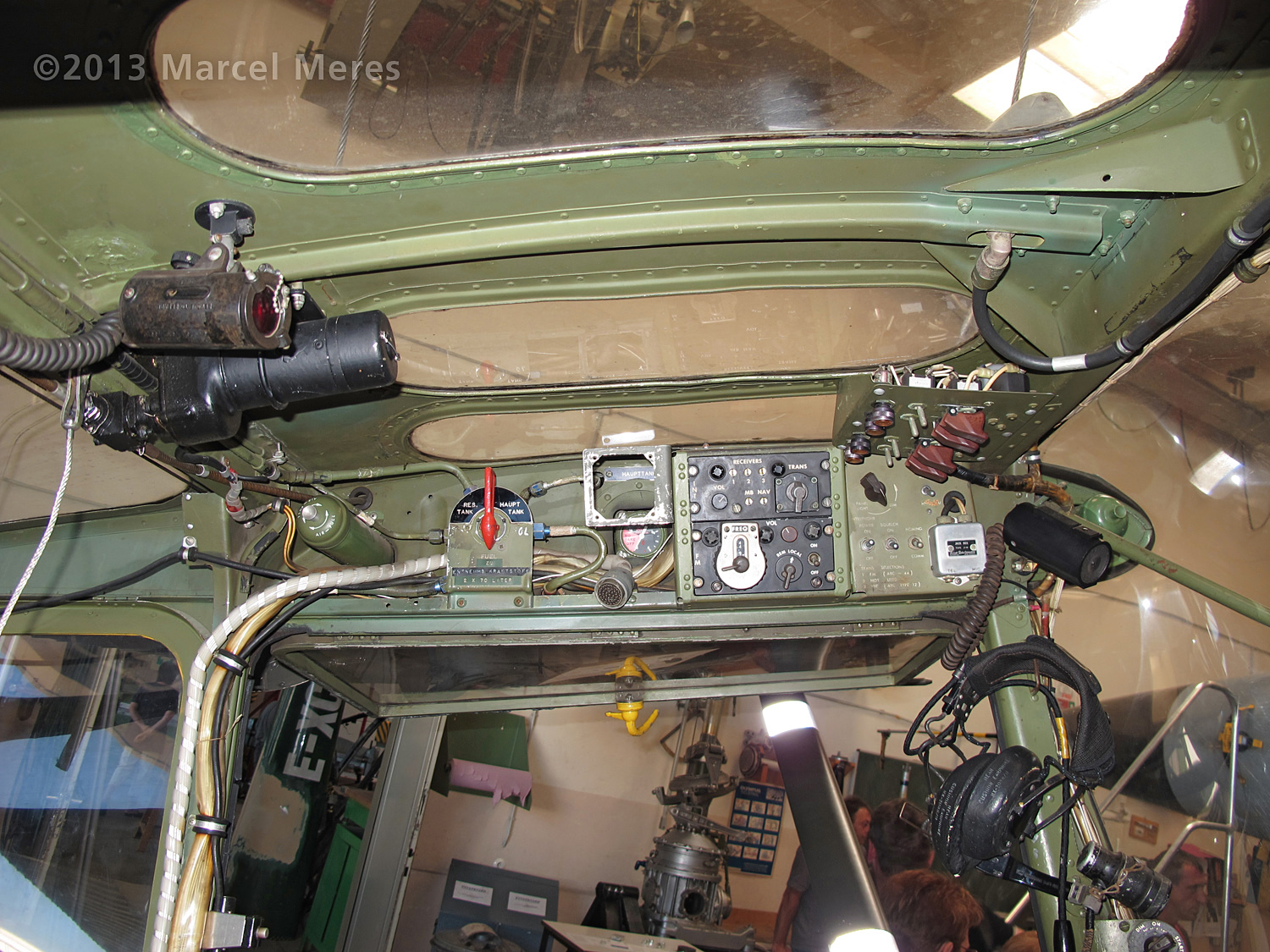 This is the upper portion of the canopy front section (upper picture). Please note: both the side windows are foldable upwards. 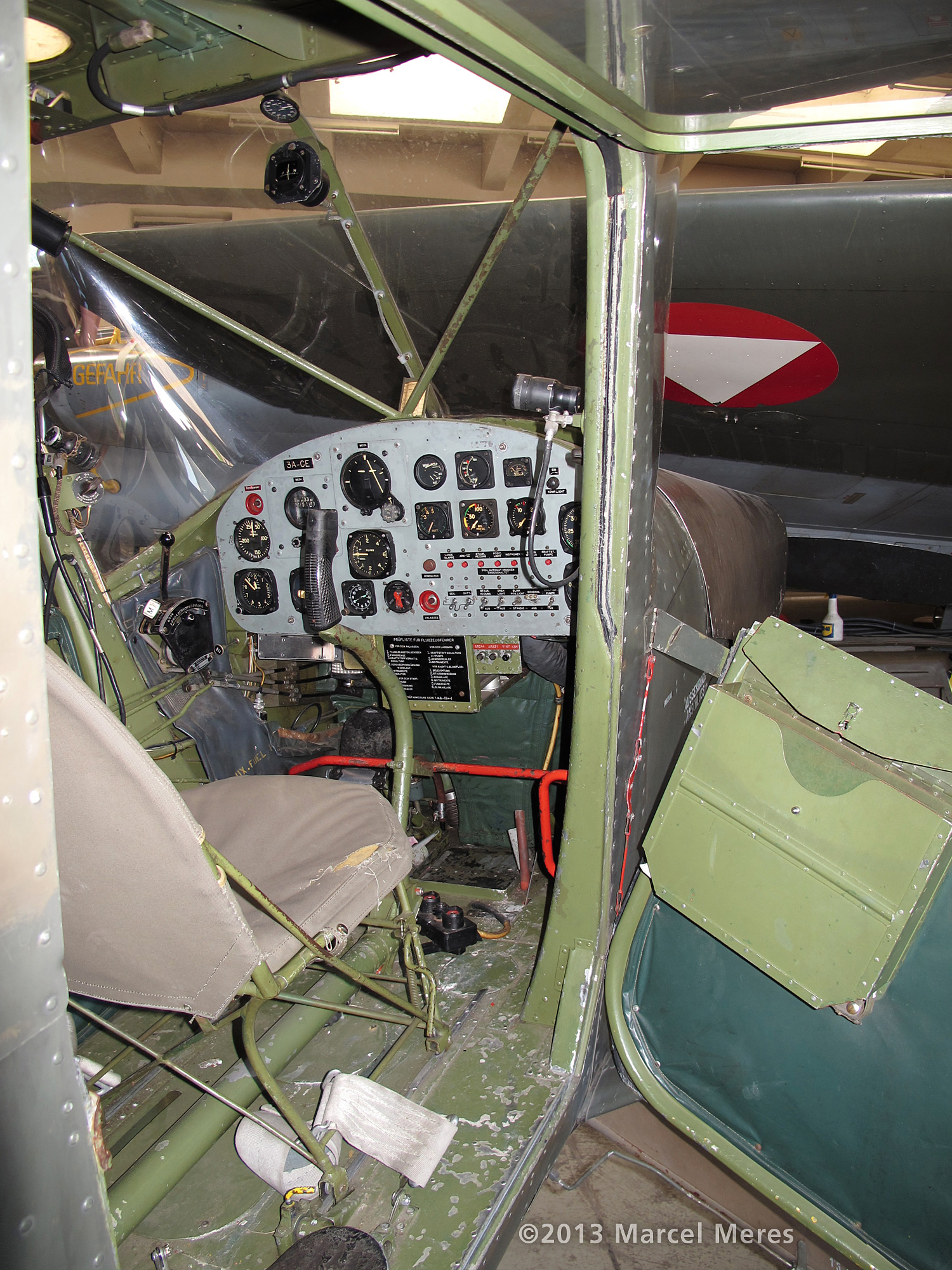 The cockpit door details with a map and flight reports case: 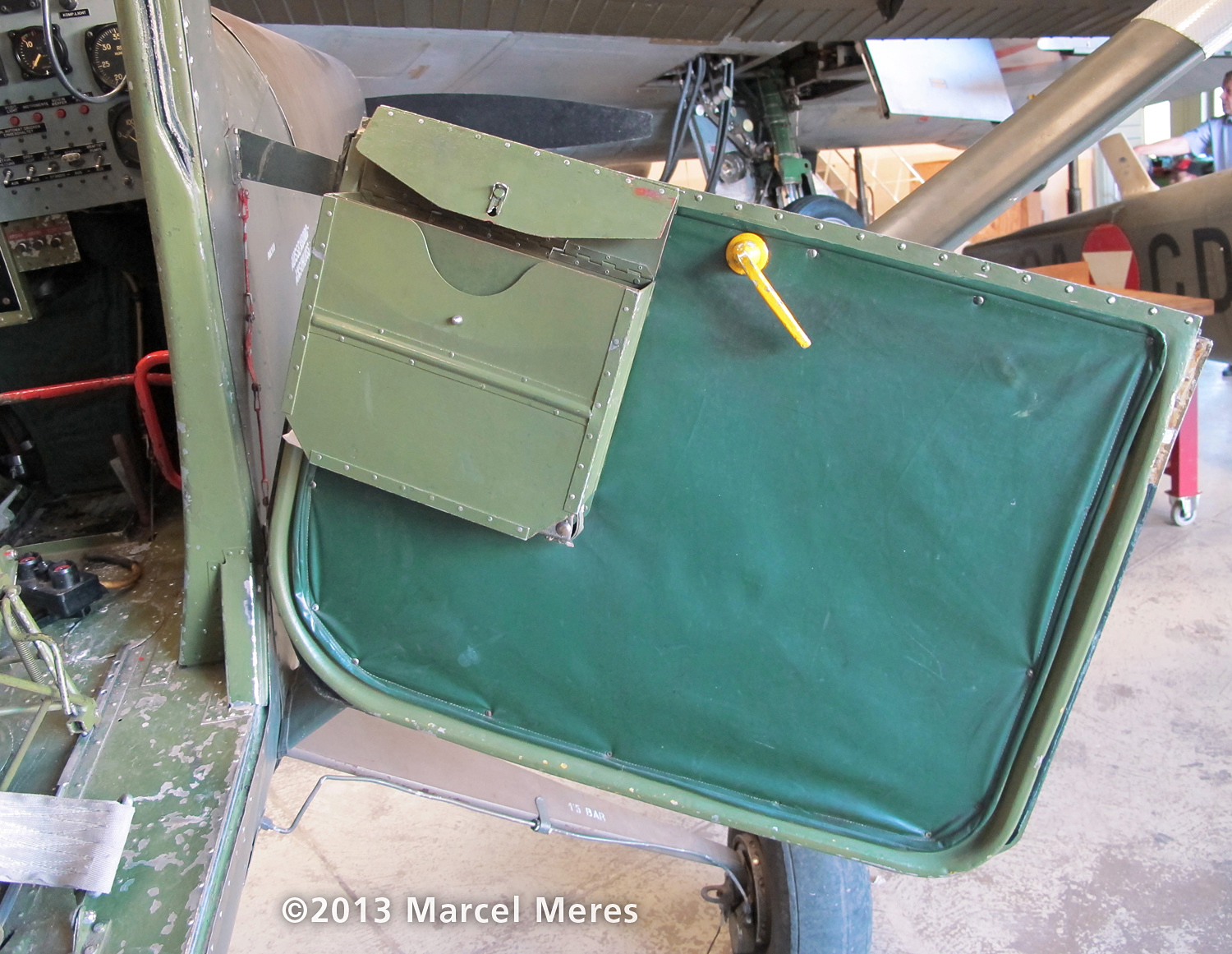 Below is the rear-seat observer office with his control stick unmounted for unknown reason – that serpentine stick placed near the side-wall (lower picture). The pilot’s shoulder belt (brown coloured and lying on the floor) should run throuh the triangular hanger (on the upper left portion of the picture) and toward the front seat, as I remember. 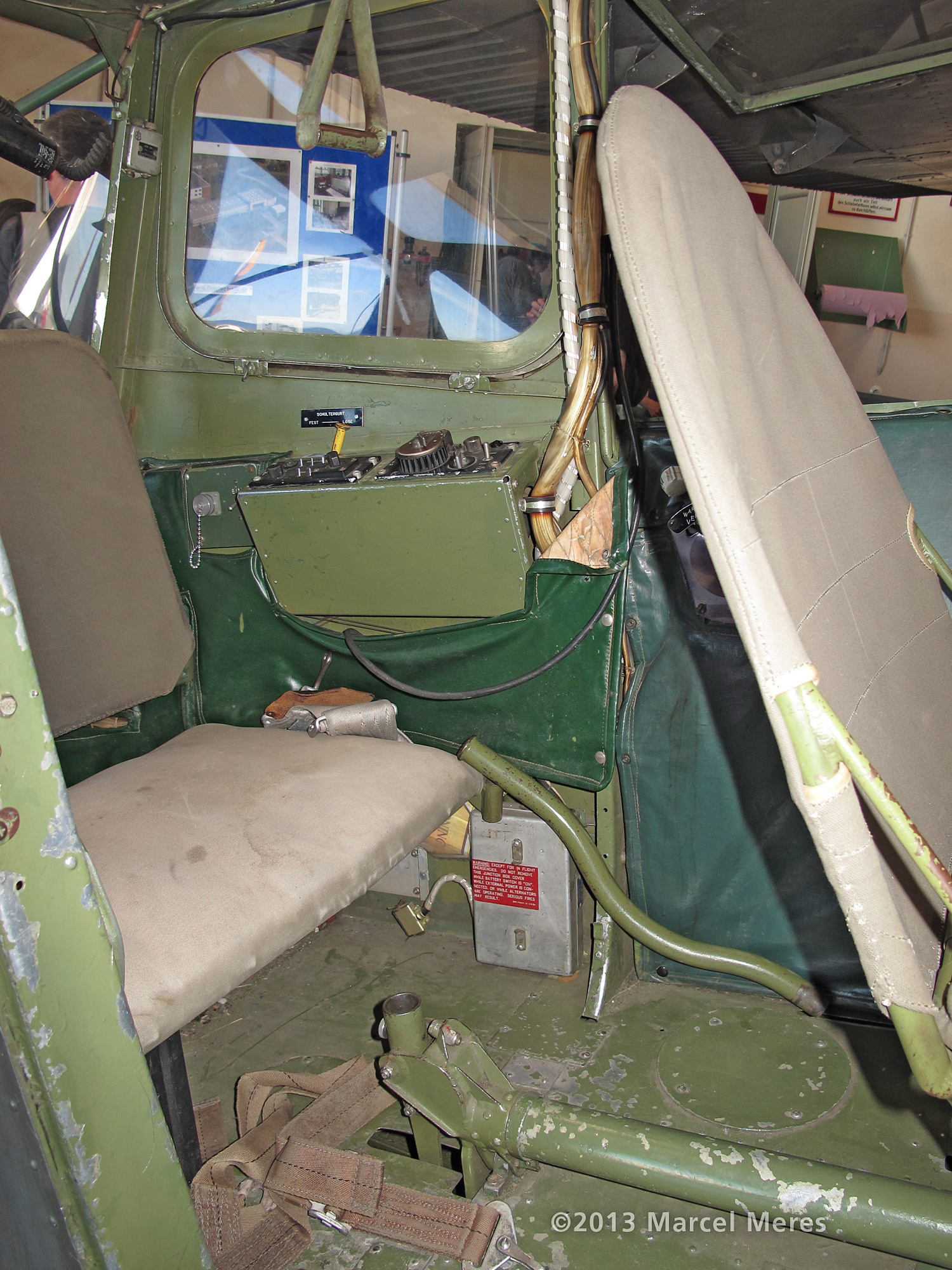 Now the camera is looking slightly upwards to show us the top wall: 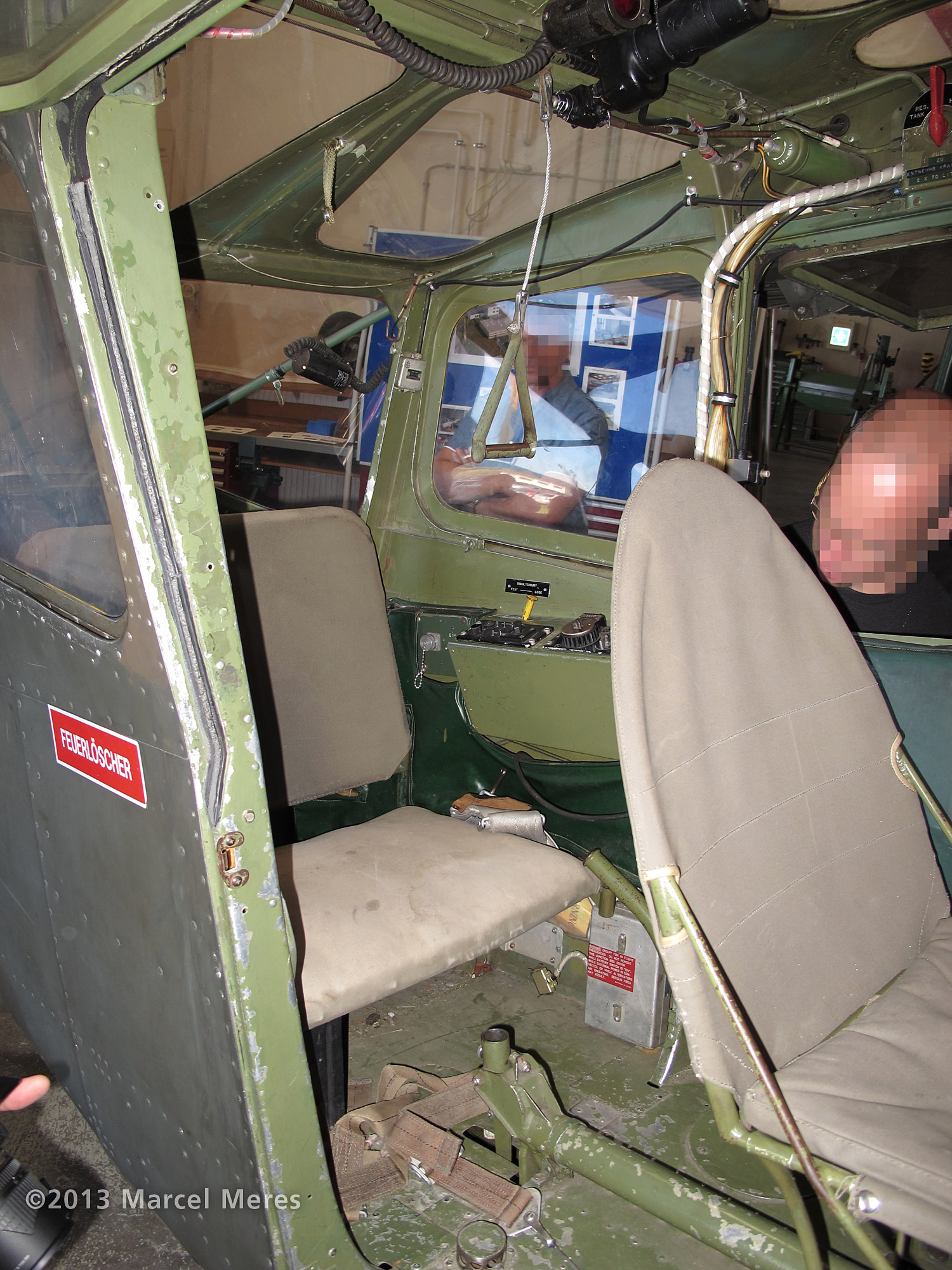 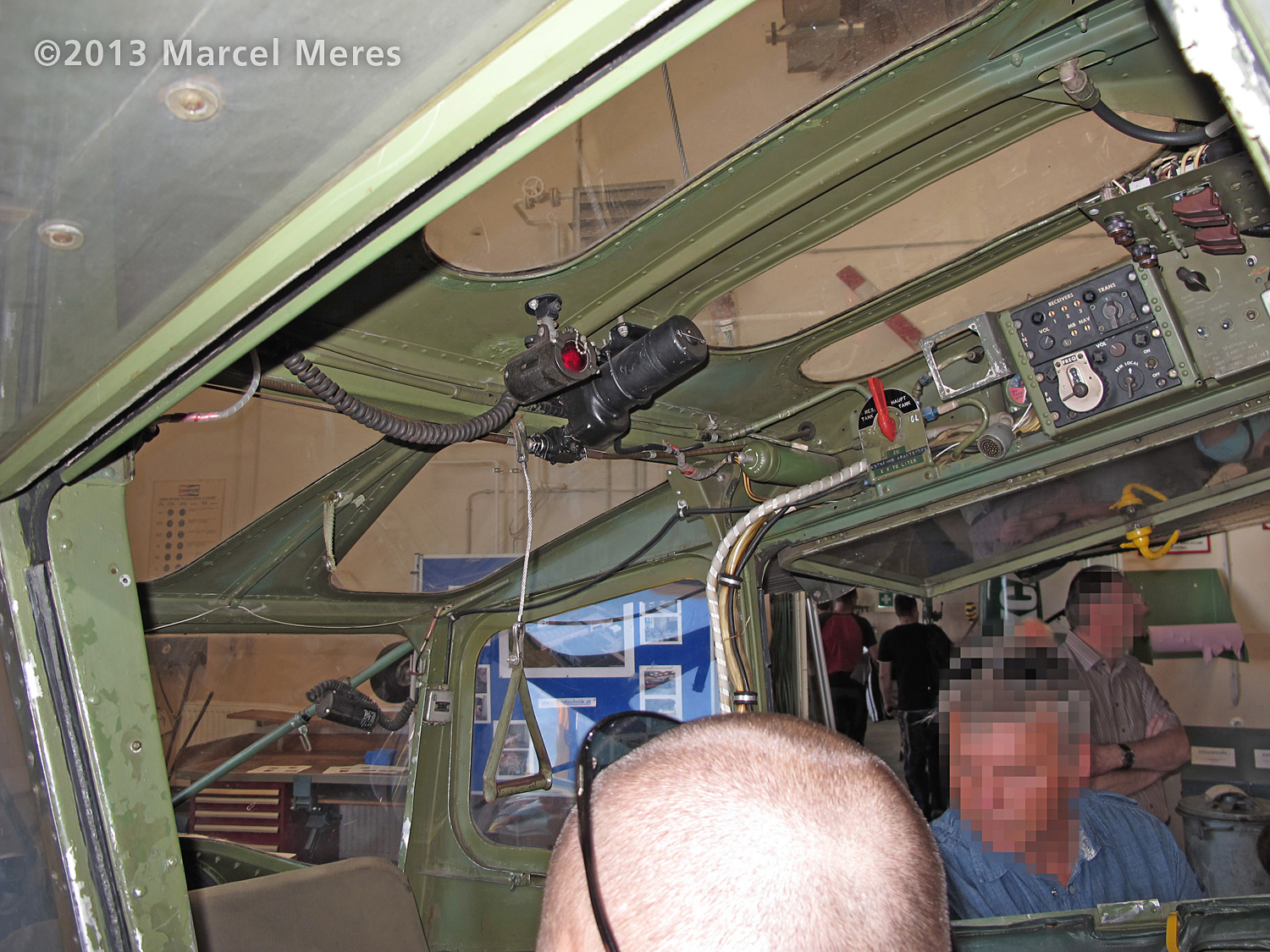 Juraj Bojkovsky offered me his DVD with a lot of highly detailed cockpit photographs he made that day. His shots are covering both exhibited airplanes more broadly – thus giving us the perfect reference material of nearly every inch of the Bird Dog’s cockpit. It’s large so I decided to post it separately as a second part of this article.

For more outer photographs of this beautiful old-timer, please check-out for example airliners.net. There are a lot of videos on YouTube explaining the combat role of the FAC in conjunction with this small plane in Vietnam. The abundance of references fuels the feeling that the Cessna Bird Dog was an important plane, thus becoming well-known too. Unfortunately the poor choice of the model kits implies that this plane is forgotten or comercially completely inatractive for most kit producers. It is clearly visible especially if you decided to build the 1/48 scale injected kit. Older kits only, longer time out of production. You may prabably find some on e-bay hopefully – good luck!

This entry was posted in Airplanes, English, References. Bookmark the permalink.