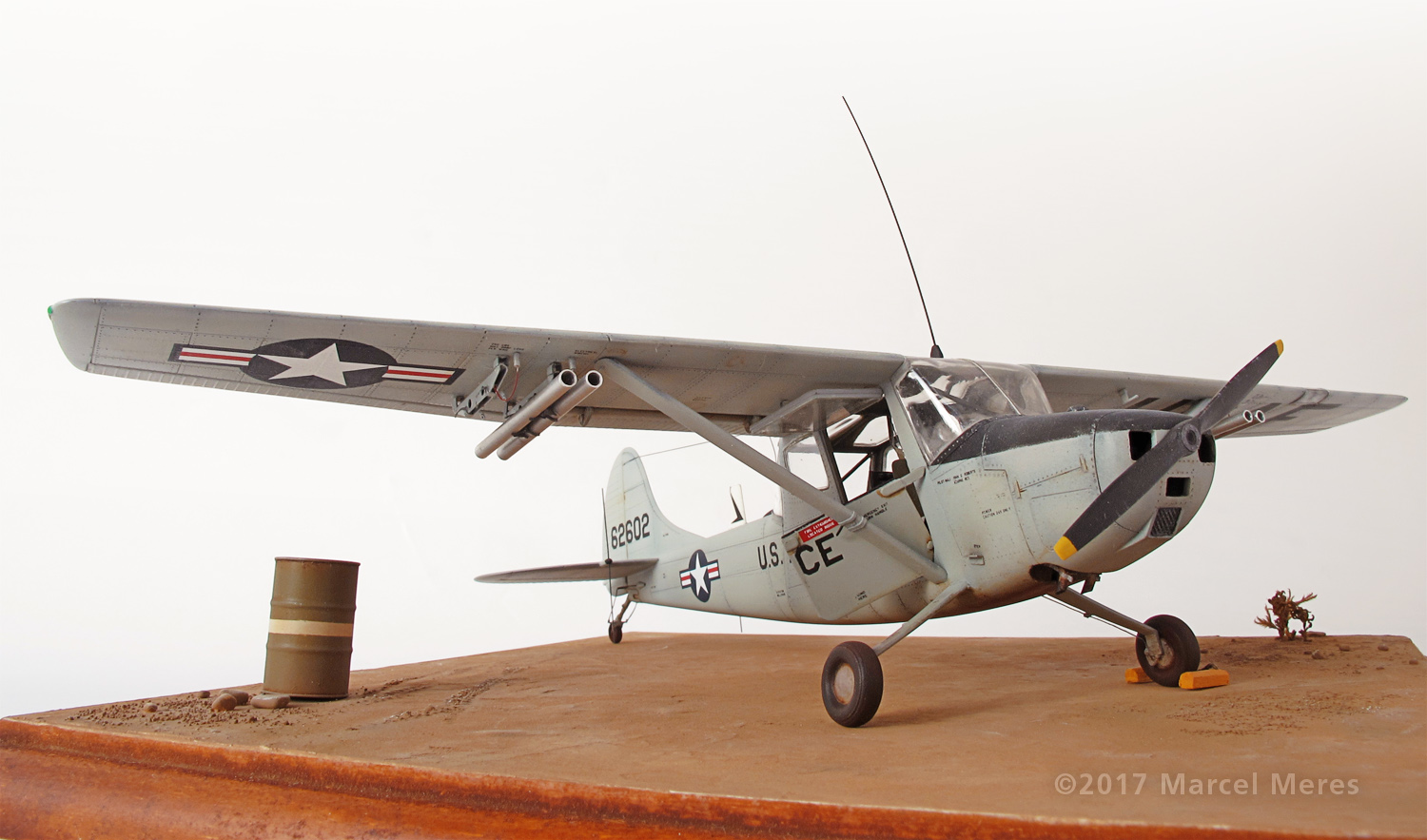 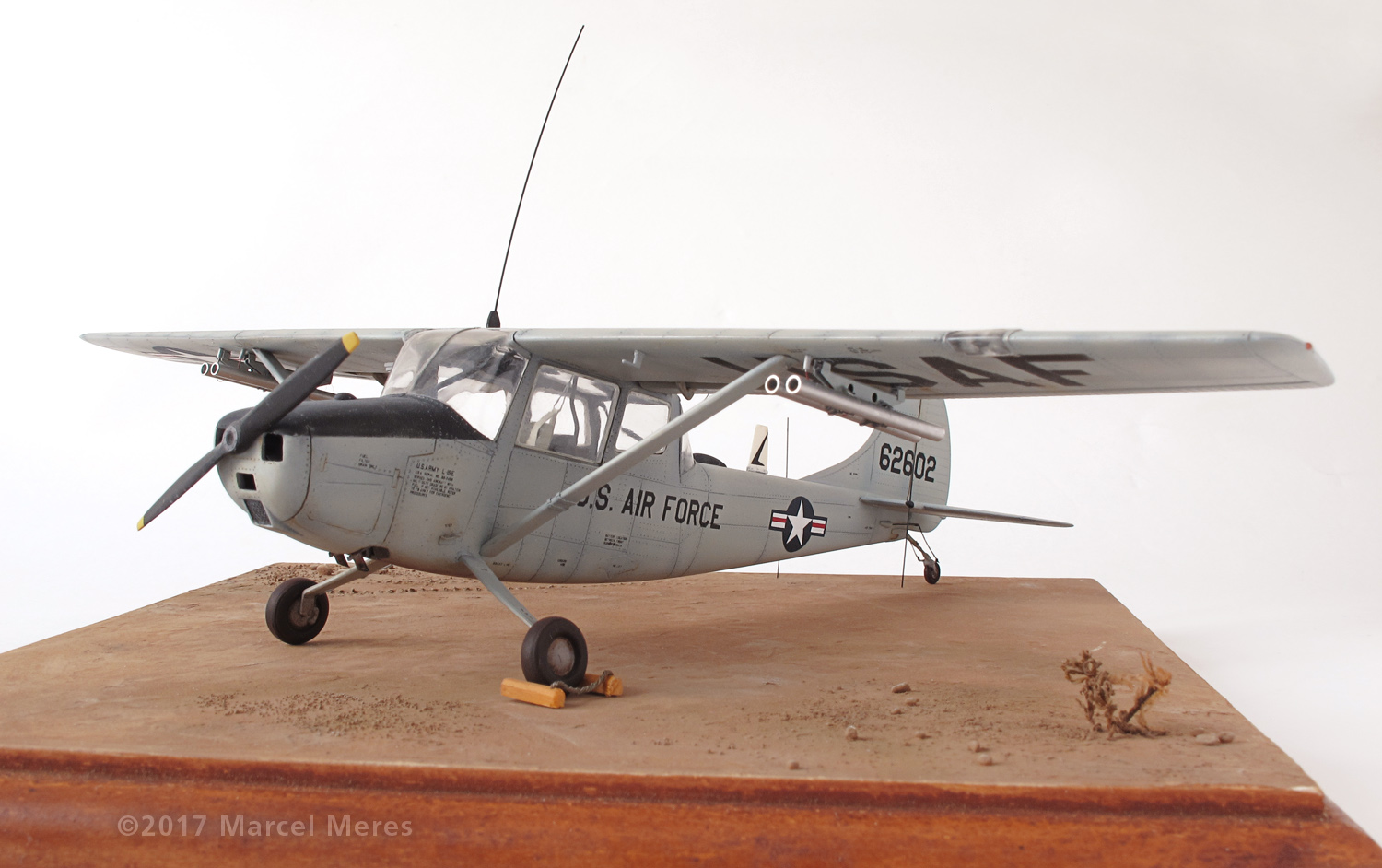 I always wanted to build the model of one of the famous observer airplanes flown during the Viet-Nam conflict, the Cessna O-1 Bird Dog. Only one Bird Dog kit exists in 1/48 scale so far. Yes, it is that old one, released by Model USA in 1988 as their first and only kit. I got one and tried to build it as a warbird flown by USAF during the Viet-Nam war. I was sure my kit had to carry the underwing rocket launchers used by the Forward Air Controllers (FAC) to spot the enemy forces. 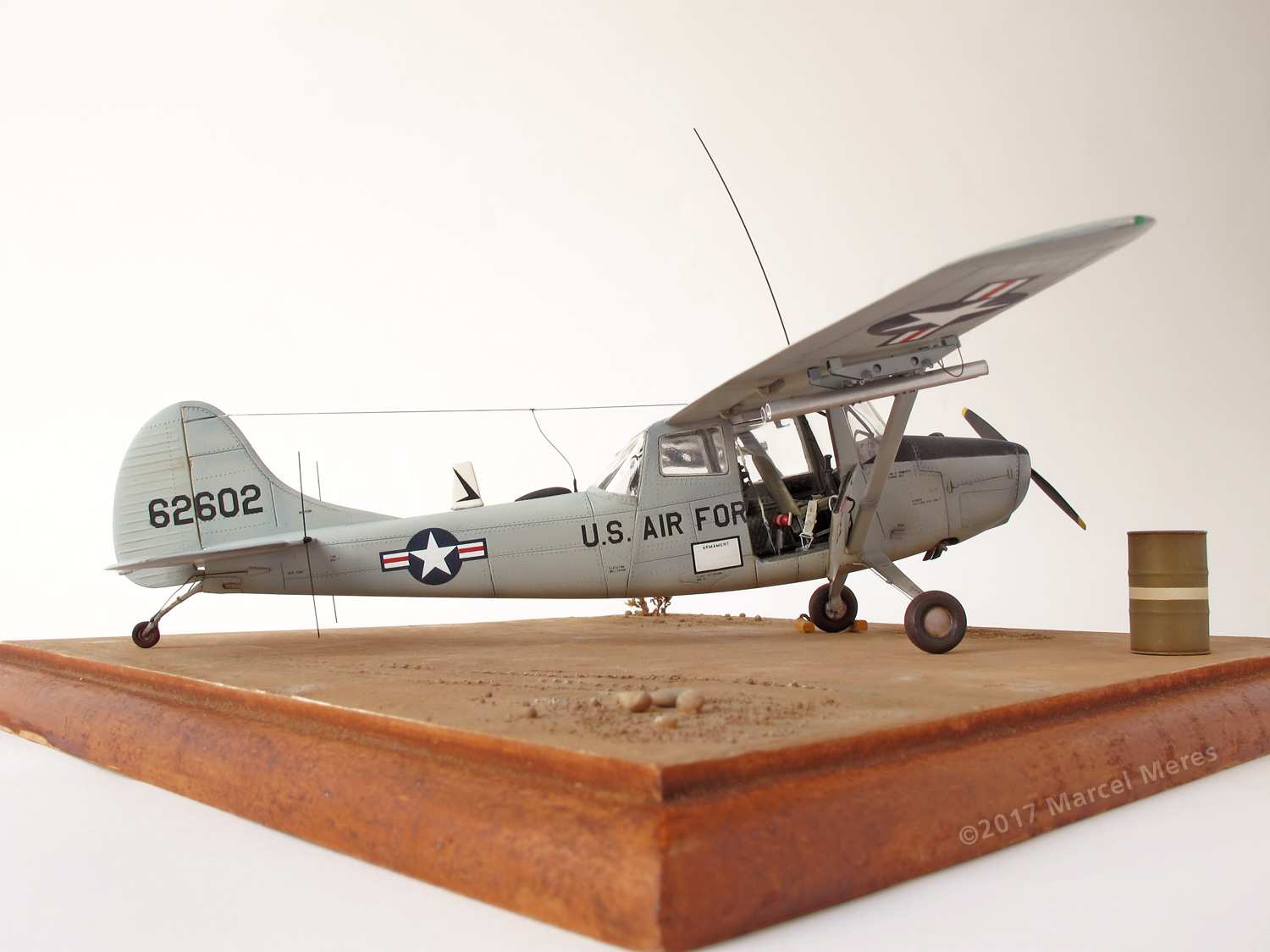 The kit is nice and relatively simple to assemble so it was built mainly as it was in the box, although minor upgrades of my own were made along with some parts from the eduard PE set #48-040. 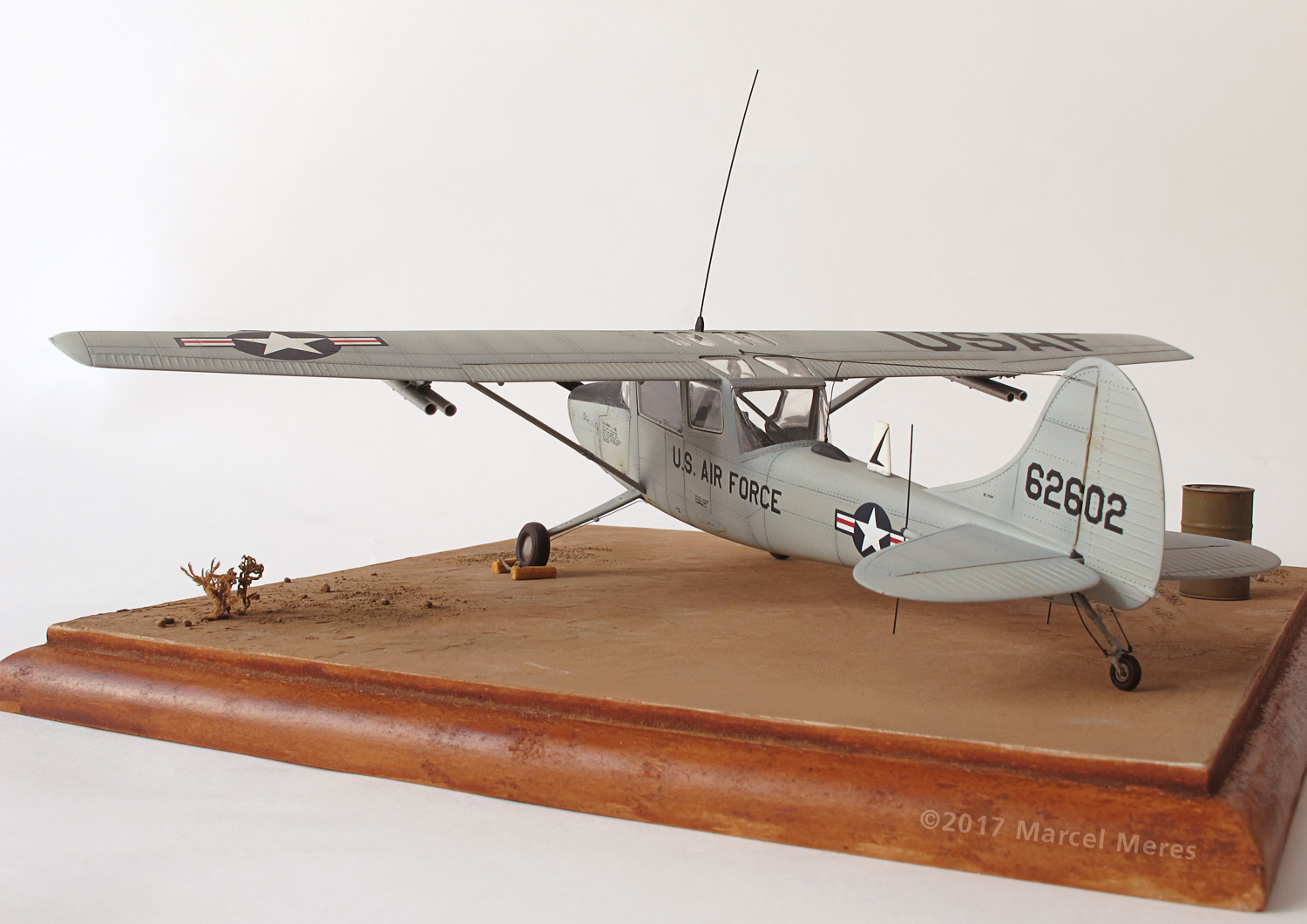 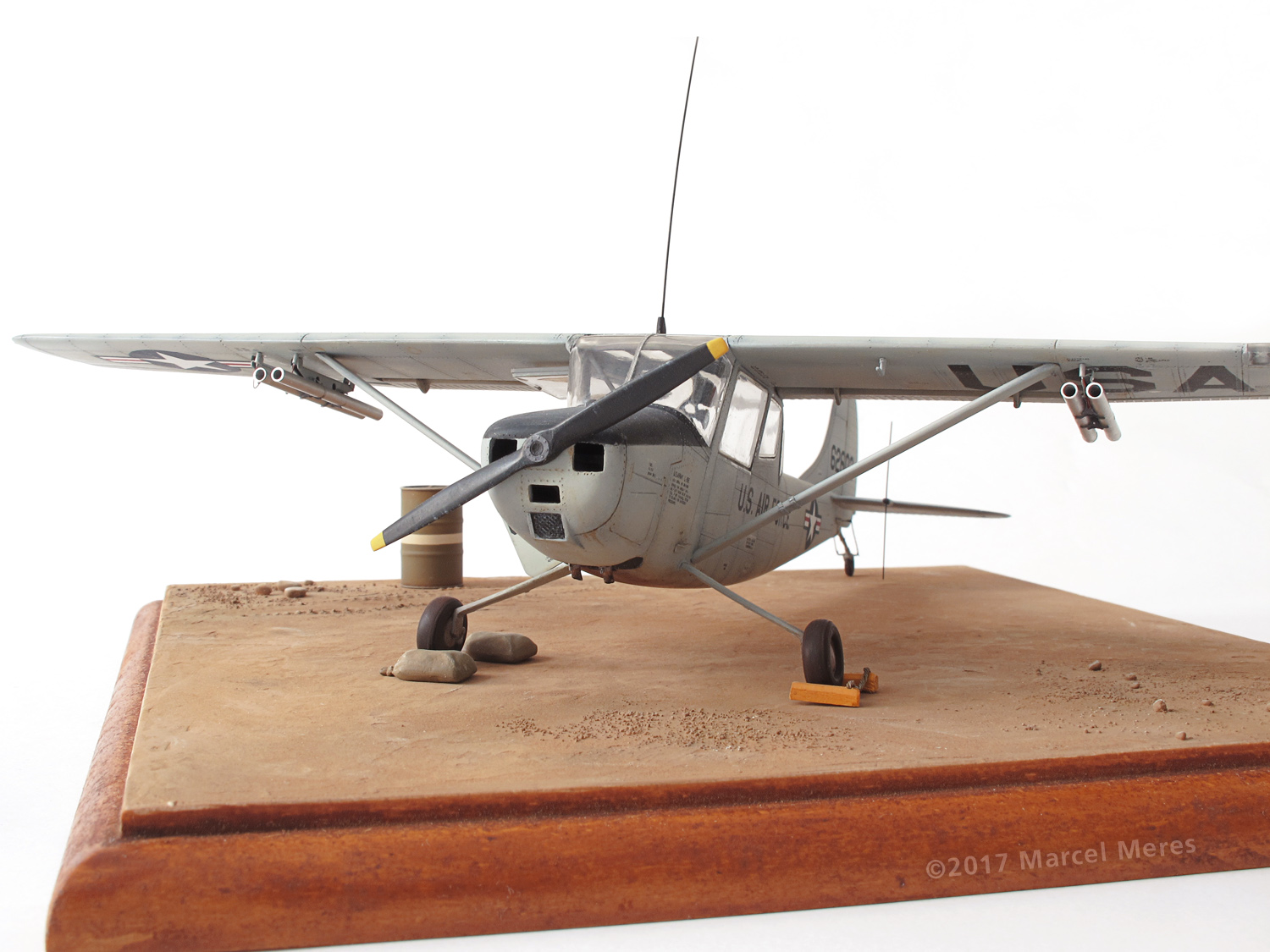 B) Cockpit details
The cockpit was left as it was with adding photoetched instrument panels and home made pilot harness. Original thin styrene rods, representing the front and rear inforcement struts inside the cockpit, were replaced by injection needle tubes. Some wiring was added too. 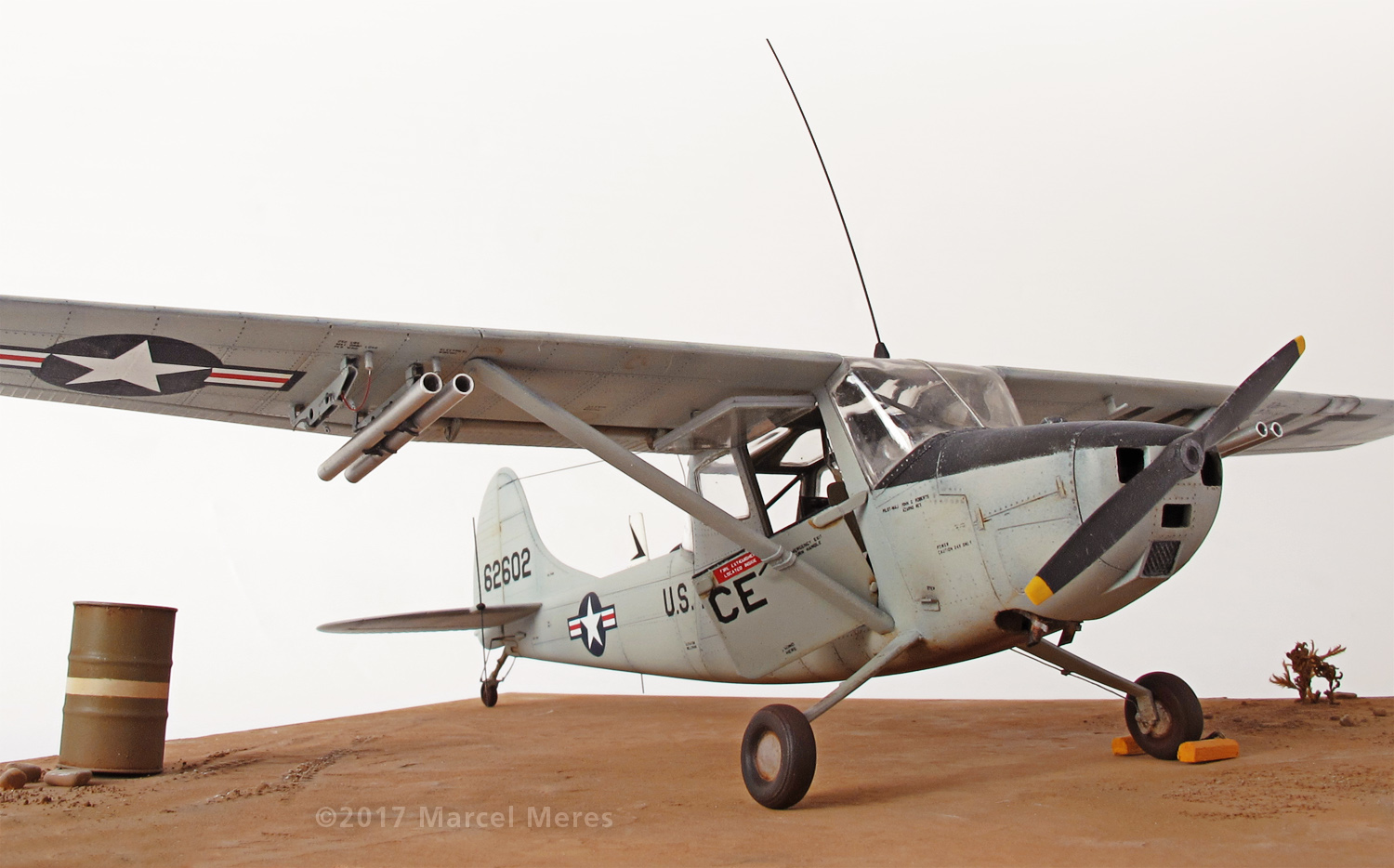 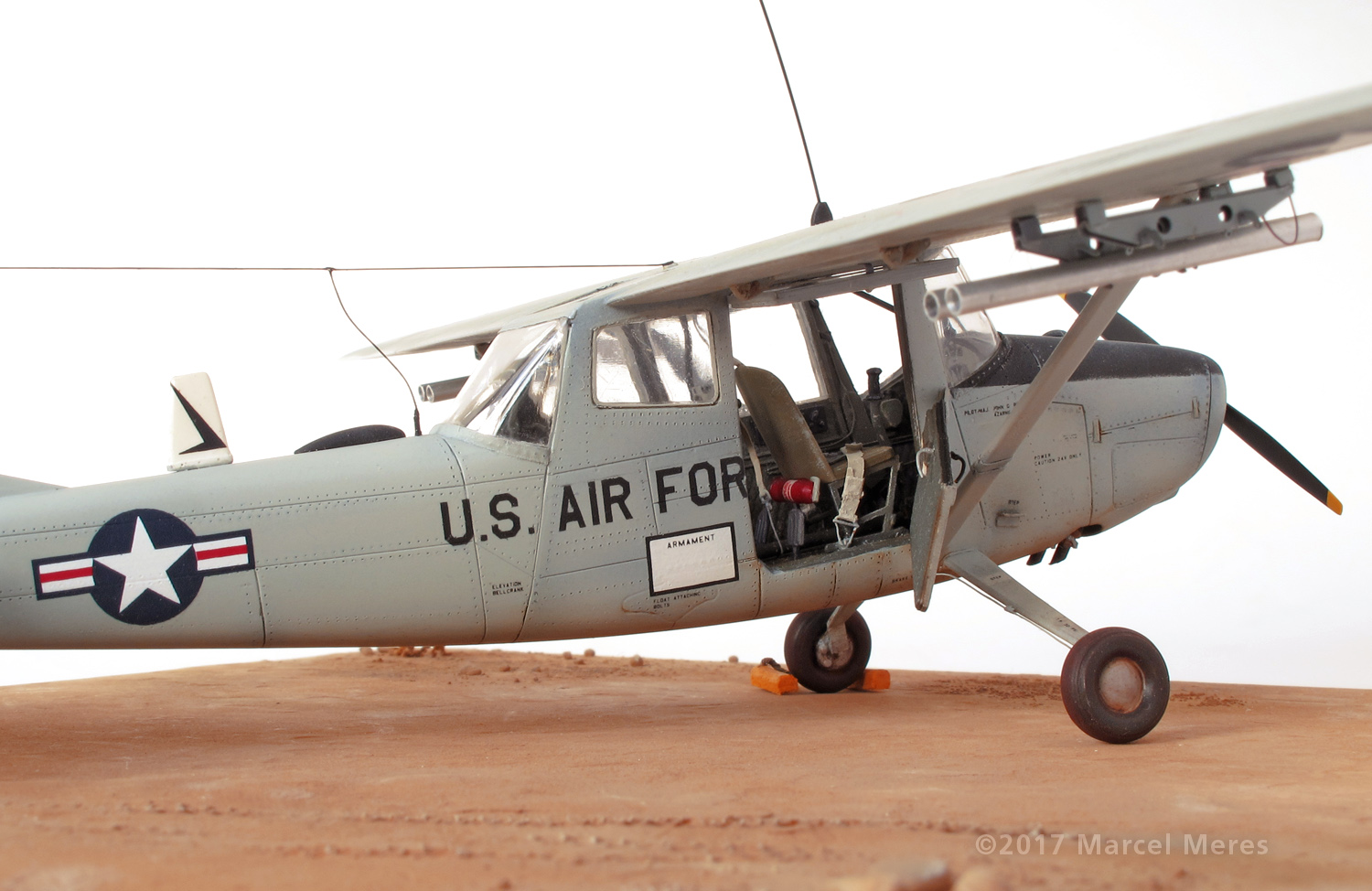 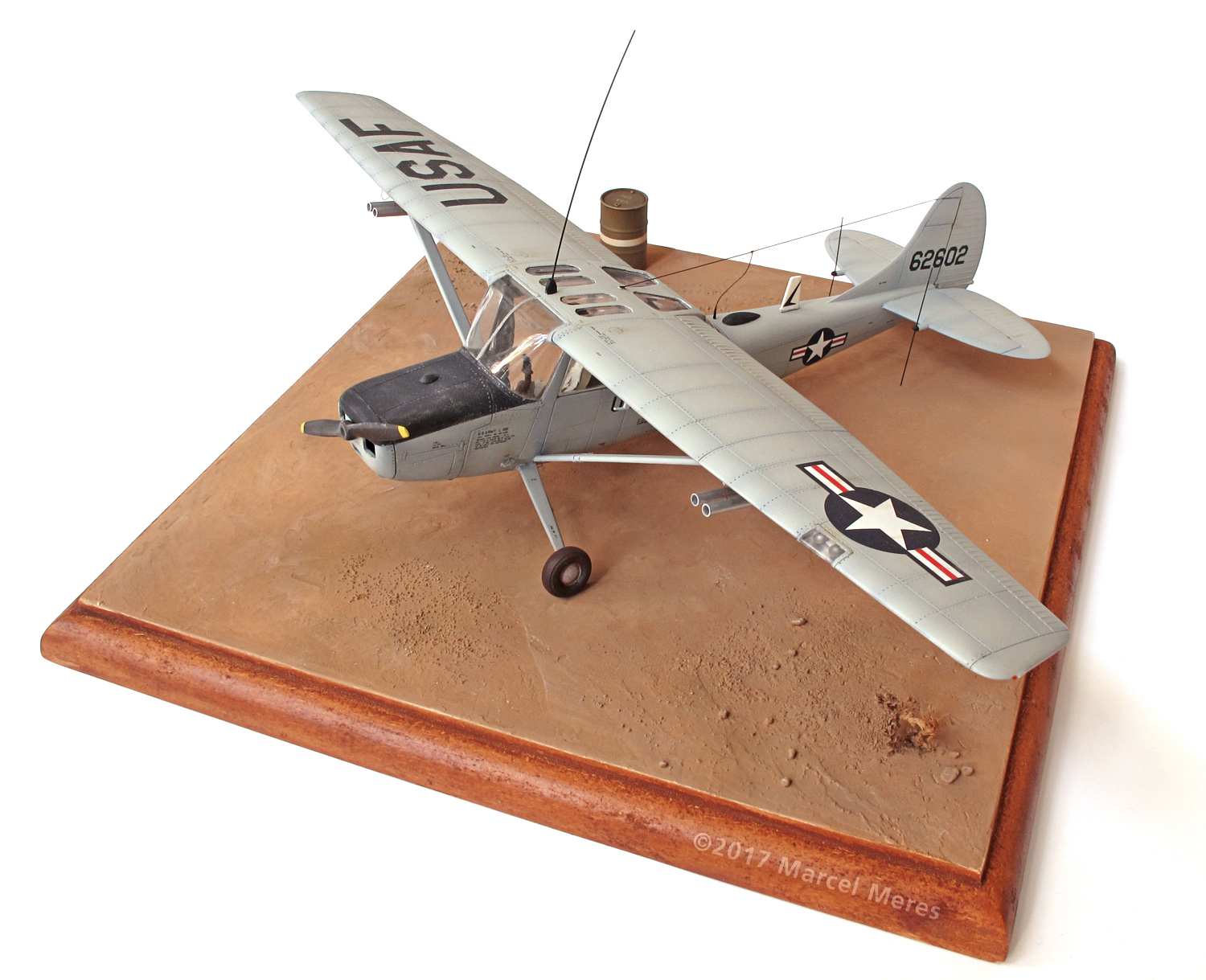 None of the proposed markings was my cup of tea. For my Bird Dog, I wanted s USAF marking, but without the mouth – something what was not in the box. Googling was very helpful in this stage. I found some nice shots of USAF bird #62602 flying above Nam jungle. The number was drawn as vector curves using a PC. Then my drawings were sent to the signmaking studio to let them cut-out masks from an adhesive foil. Numbers were then masked out and airbrushed. The USAF lettering was made the same way… but let’s go back to the beginning of painting process for a while. 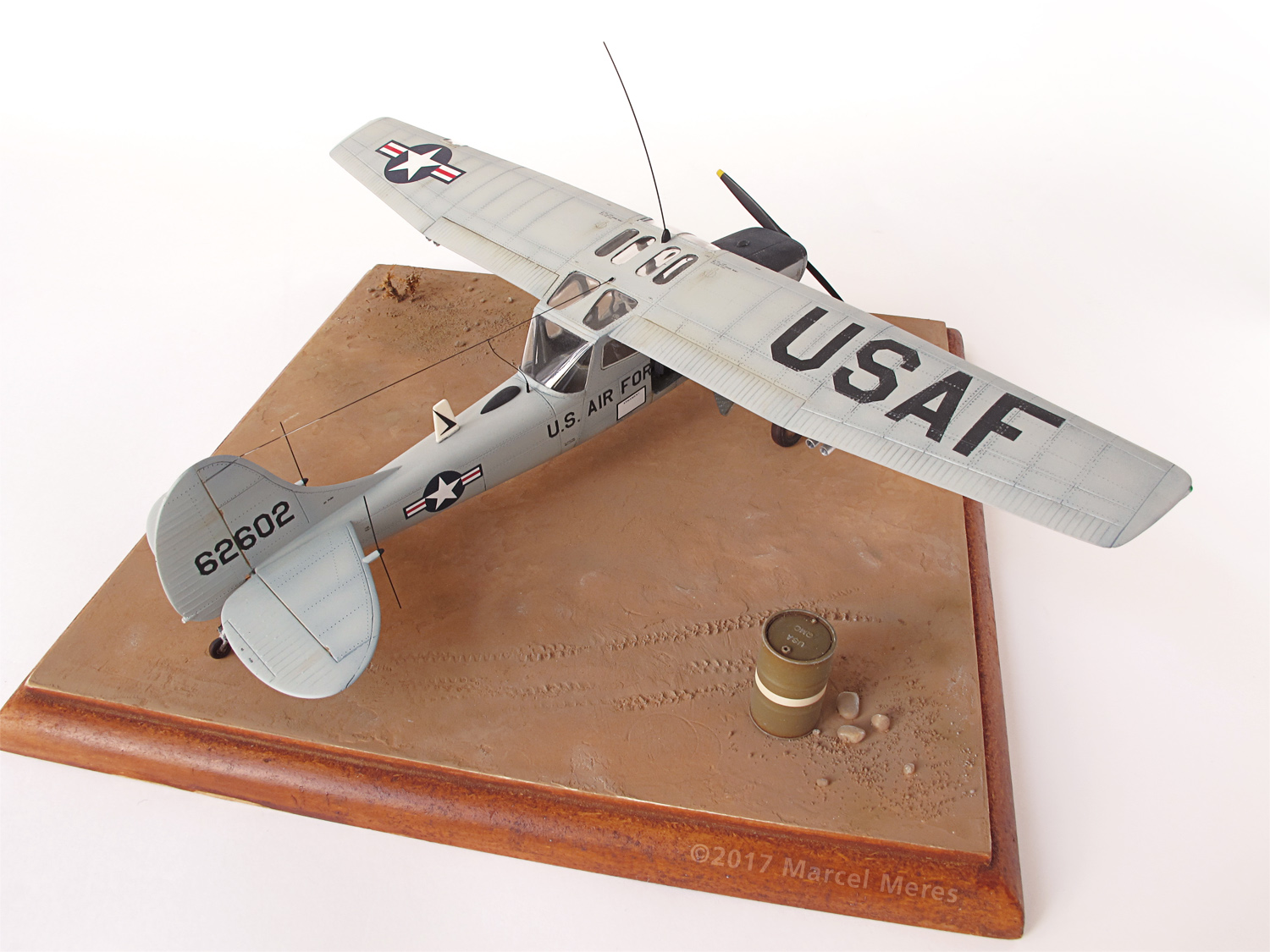 At first, Mr. Surfacer 1000 made a base and unifying coat. Then, pre-shading was used by airbrushing the Modelmaster Flat Black color alongside the panel lines. Modelmaster Aircraft Gray was used as a camo color onto it. All the lettering plus the antiglare panel were sprayed black. Then the whole plane was very gently wet-sanded to simulate a wear effect and enhance the riveting. Grit size 2000 was used.  A high gloss Purlet varnish (very similar to the Future wax) with a small amount of detergent was airbrushed prior to the decalling process. 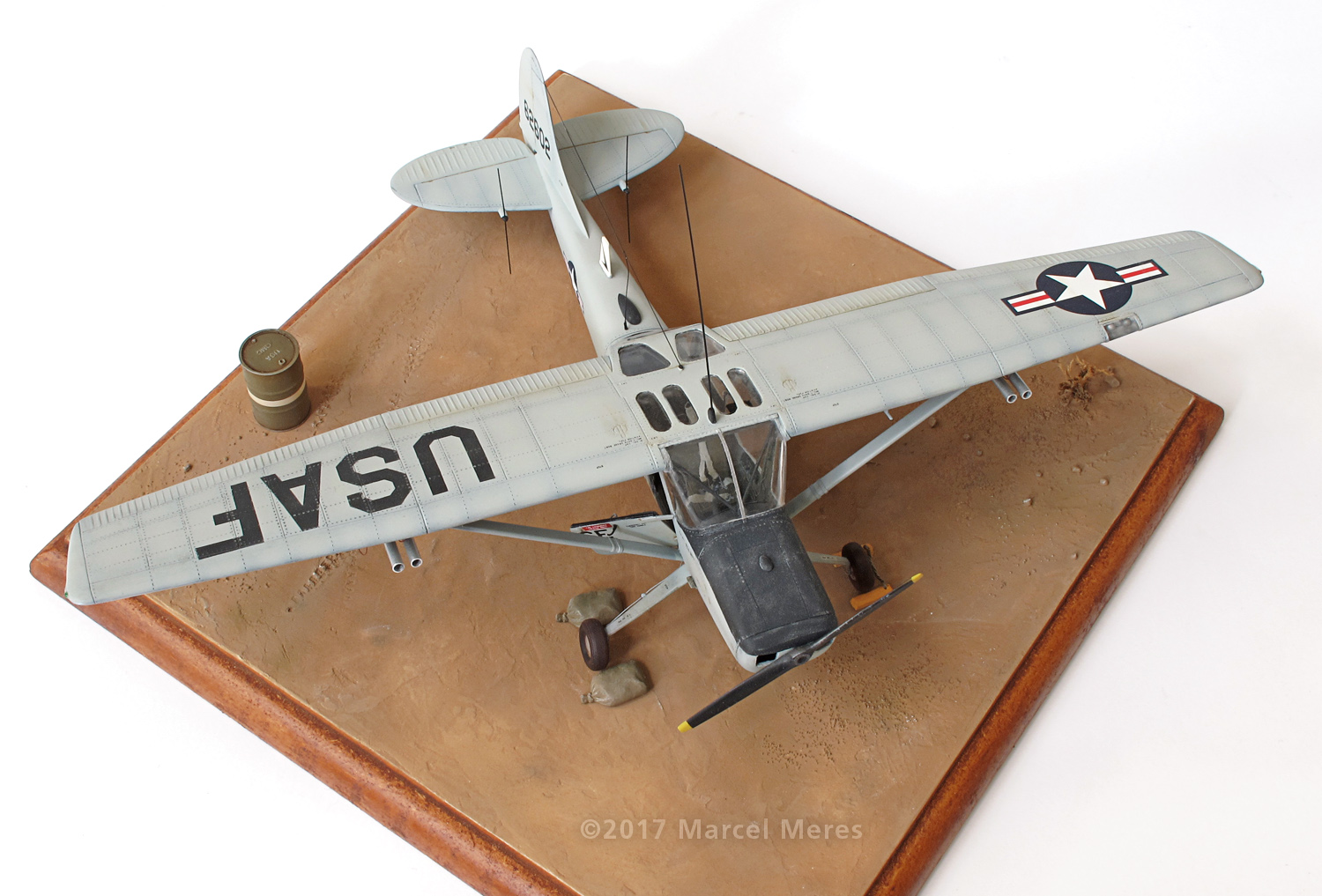 The kit came with very nice decals – printed in the USA by Microscale – with perfect register and nearly invisible film. The original national insignia and stenciling decals were used treated by Mr. Mark Setter & Mr. Mark Softer. After decalling the whole kit was oversprayed by the Purlet varnish again. I let it dry overnight. 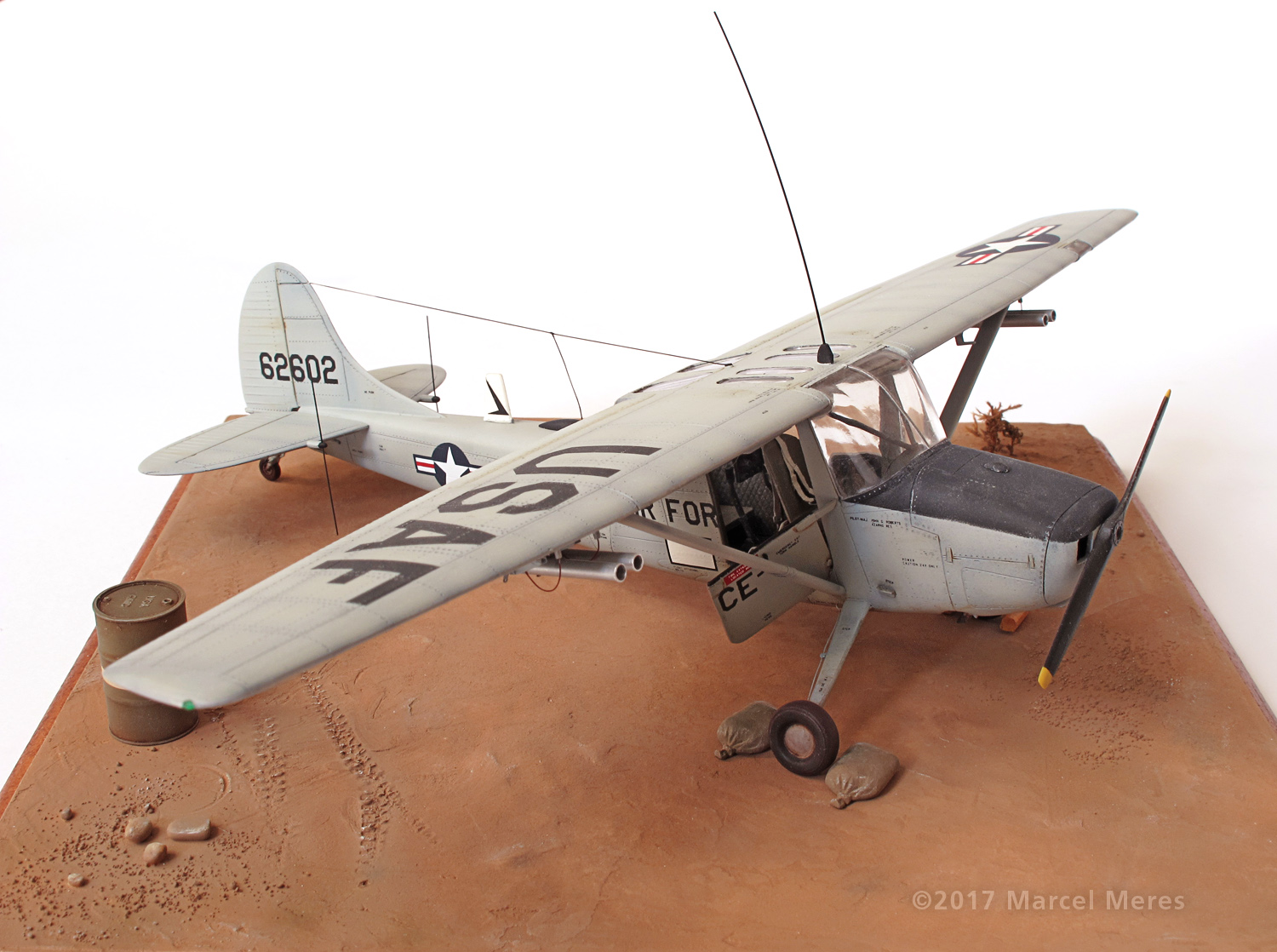 Homemade wash was used, consisting of Burnt Sienna (brown) and Payne’s Gray oil colors mixed together. Only a very delicate amount of the wash was applied in uneven way. The HUMBROL flat brown color was sprayed onto the bottom surfaces to simulate the exhaust stains.

Some “airfield dust” was added too. The CMK Light Rust pigment applied by a soft brush made it look really good. All the dark surfaces were drybrushed using the flat light gray color. The same drybrushing touches were used onto the cockpit details, in the beginning of course,  prior to the closing of the fuselage. Finally, all surfaces got Mr. Color Flat Super Clear as the finishing coat. 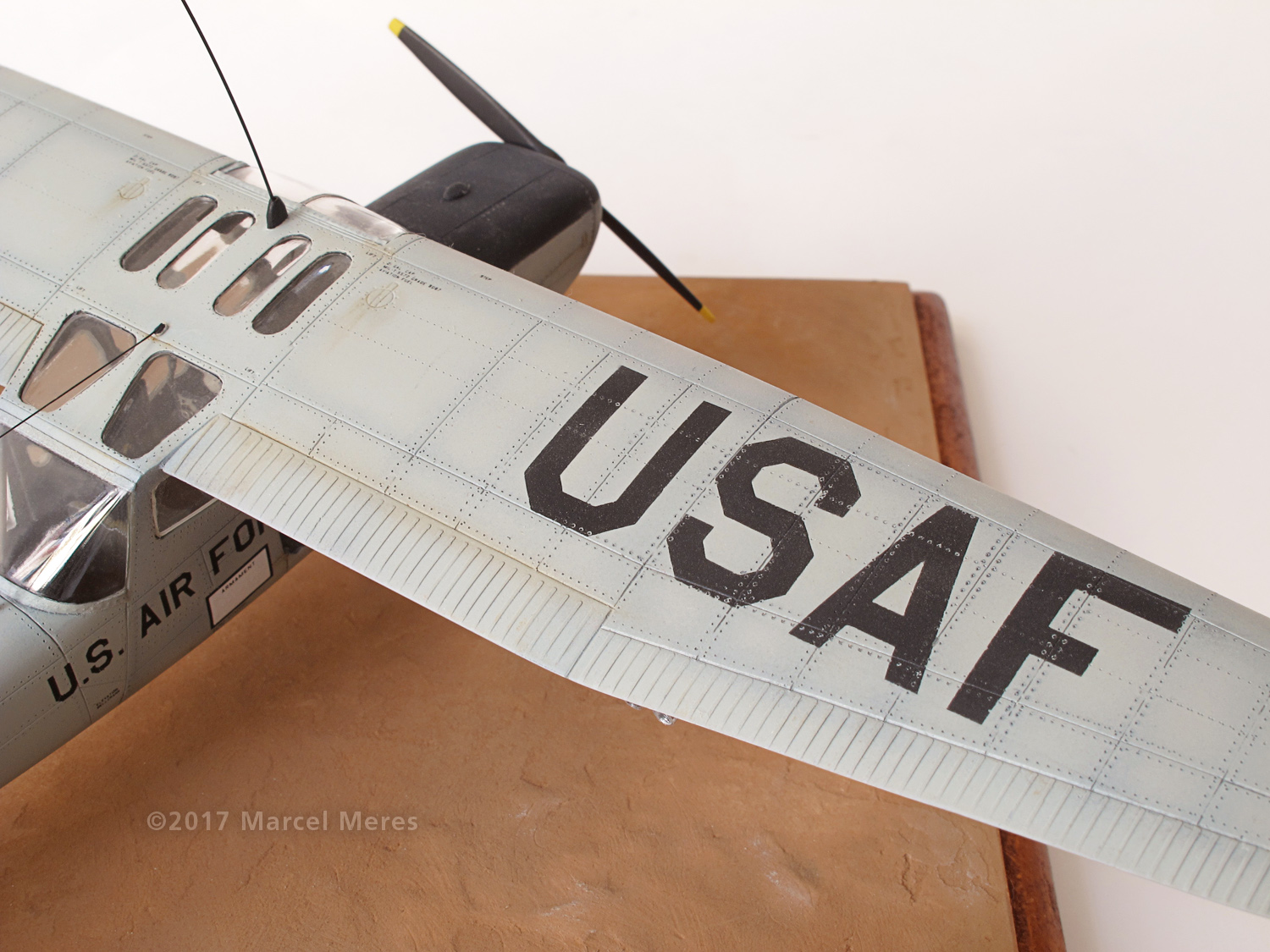 All black lettering was outmasked and airbrushed. The whole plane was very gently wet-sanded to simulate a wear effect and enhance the riveting. 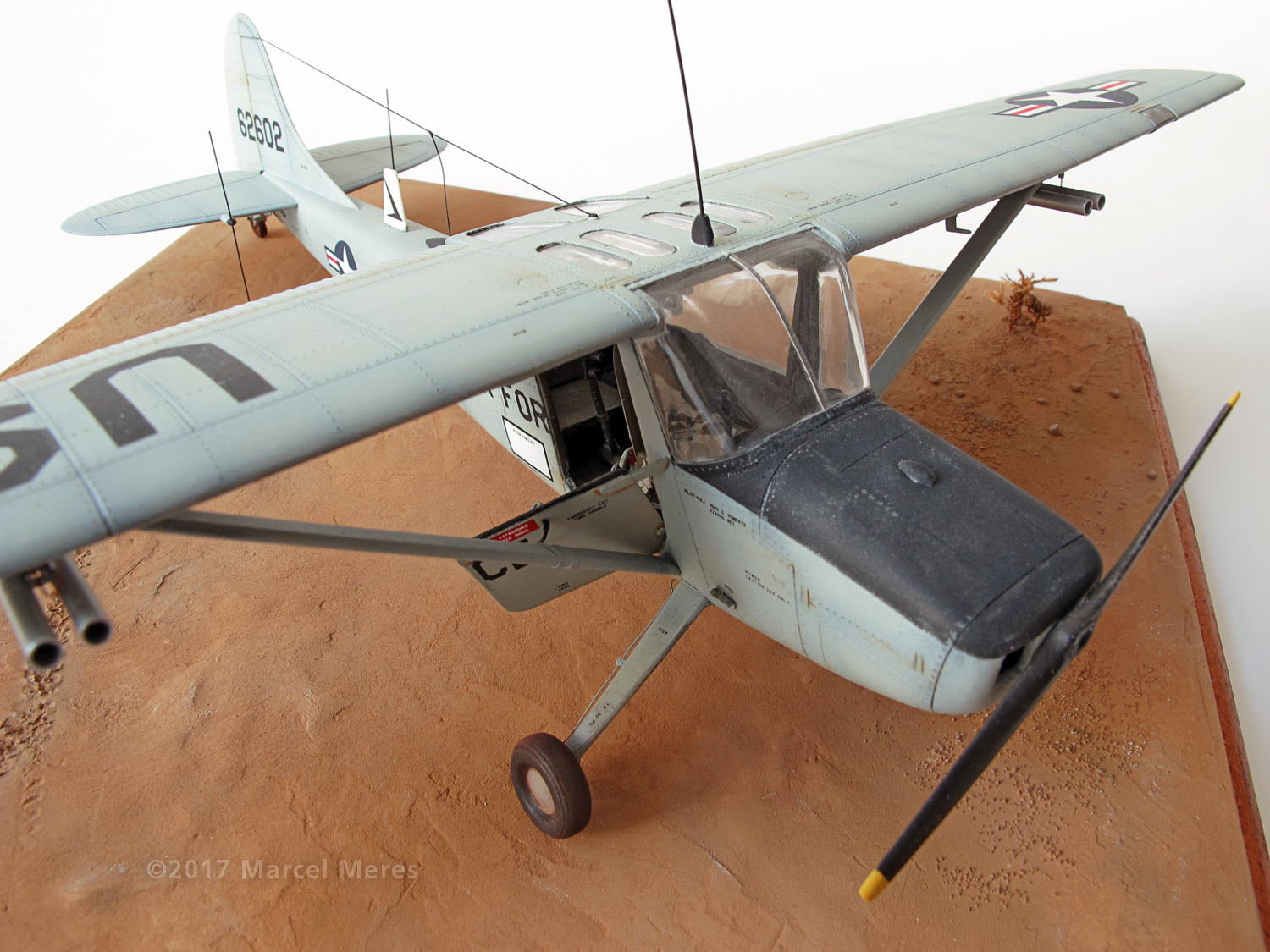 For a long time, this iconic observer airplane was somehow ignored by the model kit producers – especially those making larger scales. So I was very happy to see the recent RODEN released Cessna Bird Dog in 1/32 scale! I do hope that a brand new 1/48 scale Bird Dog would appear soon as well…

If you need further info regarding the kit (and flying with the real plane), please visit the First Look review written by Michael Benolkin which can be found on Cybermodeler site.

If you need the Cessna Bird Dog reference material, please visit my older articles here and here. I hope you’ll enjoy them 😀 .

I am very thankful to my friend Miro M. who bought the Model Master colors in Brussels for me. These colors are unavailable in Slovakia.

This entry was posted in Built Kits, English, Uncategorized. Bookmark the permalink.