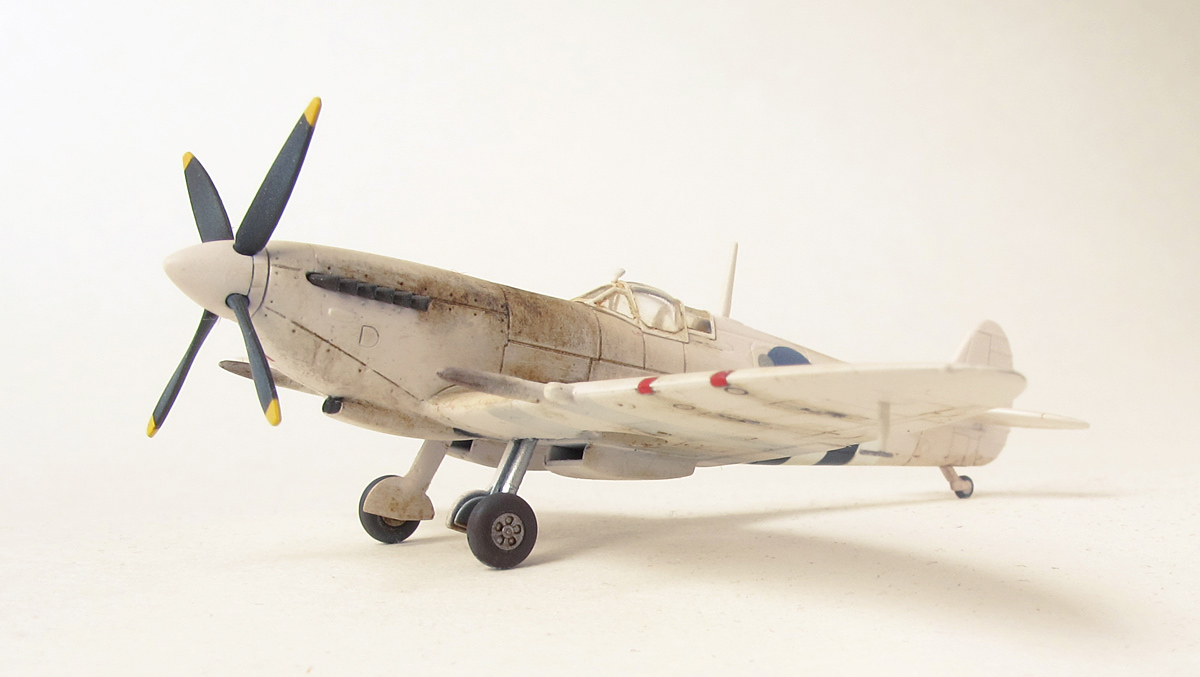 I decided to build another Spitfire model kit from the eduard midget 1/144 scale family, this time in the FR version. The inspiration came from Spitfire Recce Fighters decals No. 44014 made by the Czech producer JBr Decals. These decals cover two machines – both from the famous Spitfires of No. 16 Squadron RAF. Finally the MK716 (red) “X” was chosen for my project.

Camera Window
Since it is a fighter-recon airplane, the original eduard Mk. IXc kit needs one slight modification – adding the camera window into the port (left hand) side of the fuselage. The window was placed beside the cockpit in the radio compartment door. As one can read in the decal instructions, an F.24 camera was installed in this area while the radio was moved closer to the pilot.

Picture from the JBr Decals instruction sheet, where you can find the modification into the FR variant.

Decal producer suggests to carefully drill a hole into the radio compartment door and to create a “glass” inside the drilled hole inserting clear plastic, a piece of foil or using  ClearFix. I tried some less invasive method to avoid drilling 😀 . A small gray roundel from the box with old spare decals was my way. I was looking for the needed diameter which was calculated according to the photograph of a real machine but downscaled (into 1/144 scale). The needed decal was finally found. This search might have taken the same time as the drilling plus creating a clear insert would take. Also, there was no need to solve any  problems with the opening in the RAF cocarde. The cocarde partly covers the door with the window inside and there is no cocarde on the decal sheet with the needed opening for the camera window. Thus you would have to try to make a small opening into a very thin decal film. Definitely nothing for me. 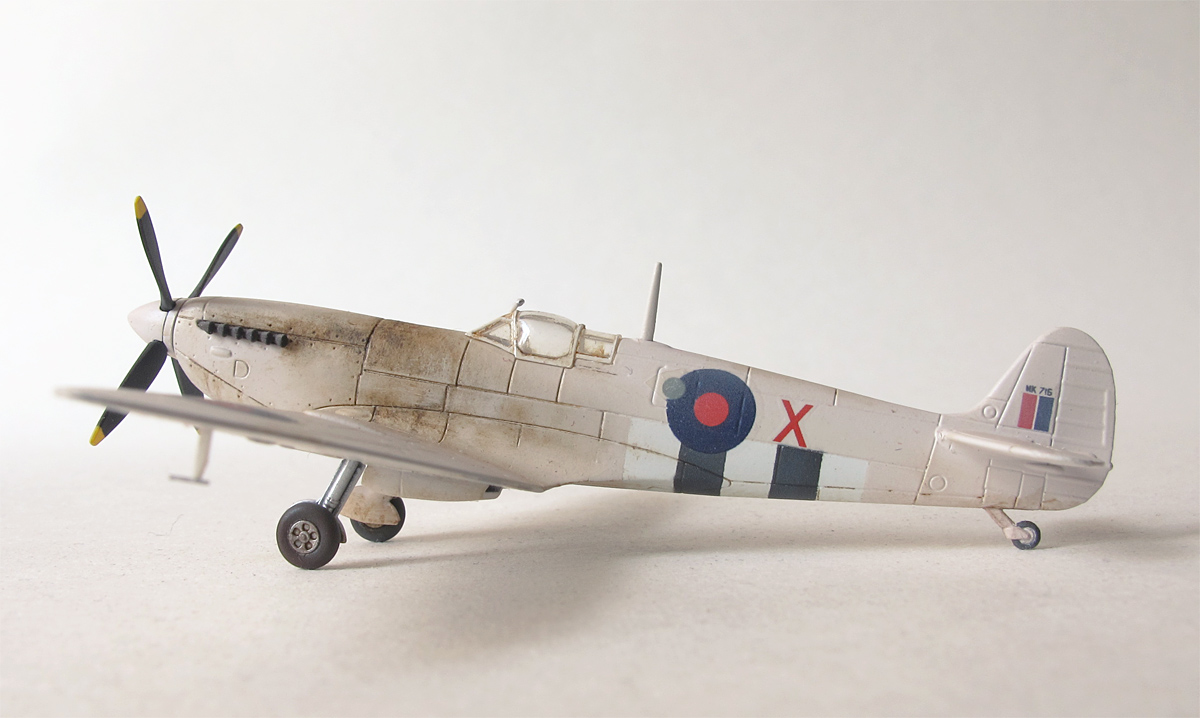 Pitot tube & rear mirror
I tried to enhance the kit adding a homemade rear mirror and Pitot tube like with the previous SUPER44 Spitfires. Relevant notes can be found in this older post.

As mentioned earlier, the chosen decal version was FR Mk. IXc MK716 “X”, Balleroy (A.12) France, from Septemer 1944. The decal sheet contains the fuselage and upper wing RAF cocardes, fuselage red X letters and tail RAF tricolor with number. To tell the truth I would be pleased by finding the b/w invasion stripes and a nose letter X on the decal sheet too – this Spitfire wears a tiny red X placed on the lower side of the cowling just behind the propeller spinner: 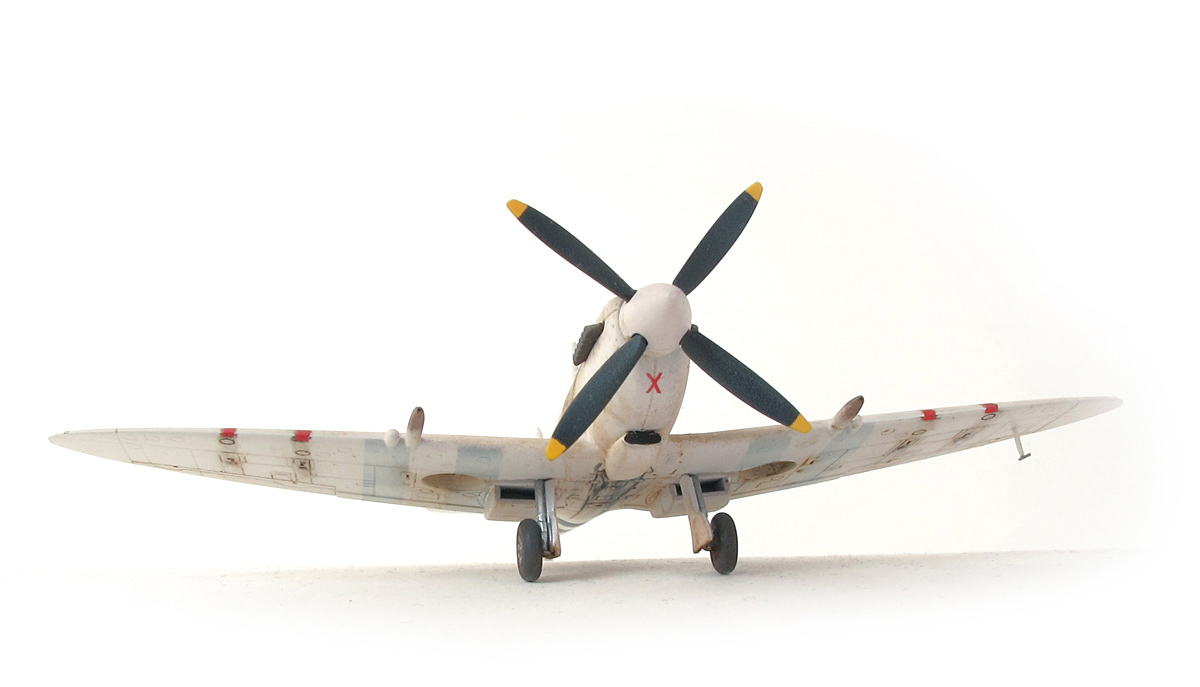 You will only realize how small the red X letter is when you try to create it – the decal sheet does not contain it.

My mini-X letter was cut out from a piece of a red decal as two tiny bands. These bands were applied crossed one-over-another in appropriate angle and place. It all went better than it sounds now 😀 .
Generally it can be said that JBr Decals have pleasantly fine and thin film with perfect surface adaptation abbility. Mr. Mark Setter and Mark Softer were used for even better effect. Decals sat perfectly.

The right “pink” selection
Reading the decal instructions, one can find a short consideration about the pink camouflage colour applied onto the fighter-recon Spitfires from No. 16 Squadron operating in low altitudes – how this colour may look like and how to mix the right pink for your kit. The whole thing is a bit more complicated in this midget scale since every colour has to be lightened according to the scale. For instance, the black invasion stripes (or propeller black) have to be lightened into dk. grey. The question is what should the light pink colour look like in your (1/144) scale if the real camouflage colour (in 1/1 scale) is described as a very light shade of pinkish colour close to off-white. In the end, I tried to mix only few drops of Mr. Color 327 red colour into the off-white 69. 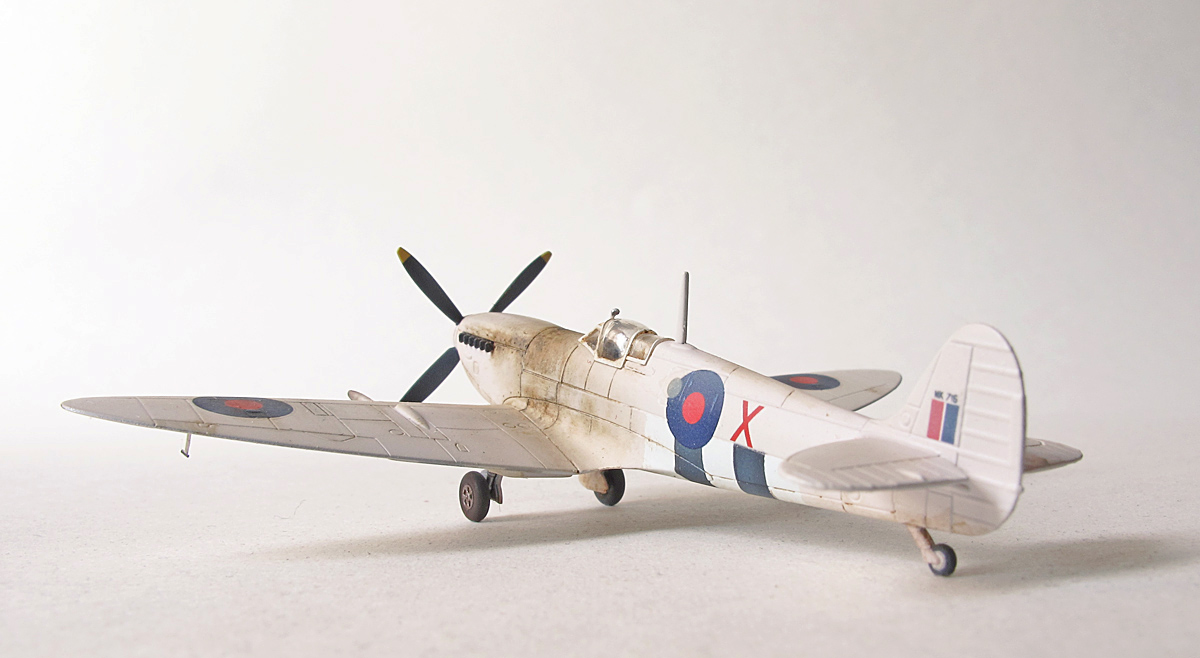 It turns out that the “pink” camo colour is easy neither to be mixed nor photographed.

Invasion stripes
According to the decal instructions the remains of the invasion stripes on the lower wing surfaces bleed through the light pinkish coat. Old b/w photographs of the real plane confirmed this fact to me. I only left the black stripes to bleed because the white stripes should be obscured completely by the upper pink layer. Using highly diluted gray colour I airbrushed the stripes onto the masked out pink wings. Very thin film of dk. gray colour was sprayed unevenly in several layers. After removing the masking tape the pink base colour was used to suppress the stripes in some places while the gray colour was used to enhance the stripes where needed. To save time, Post-it sticky notes were used instead of  masking tape. 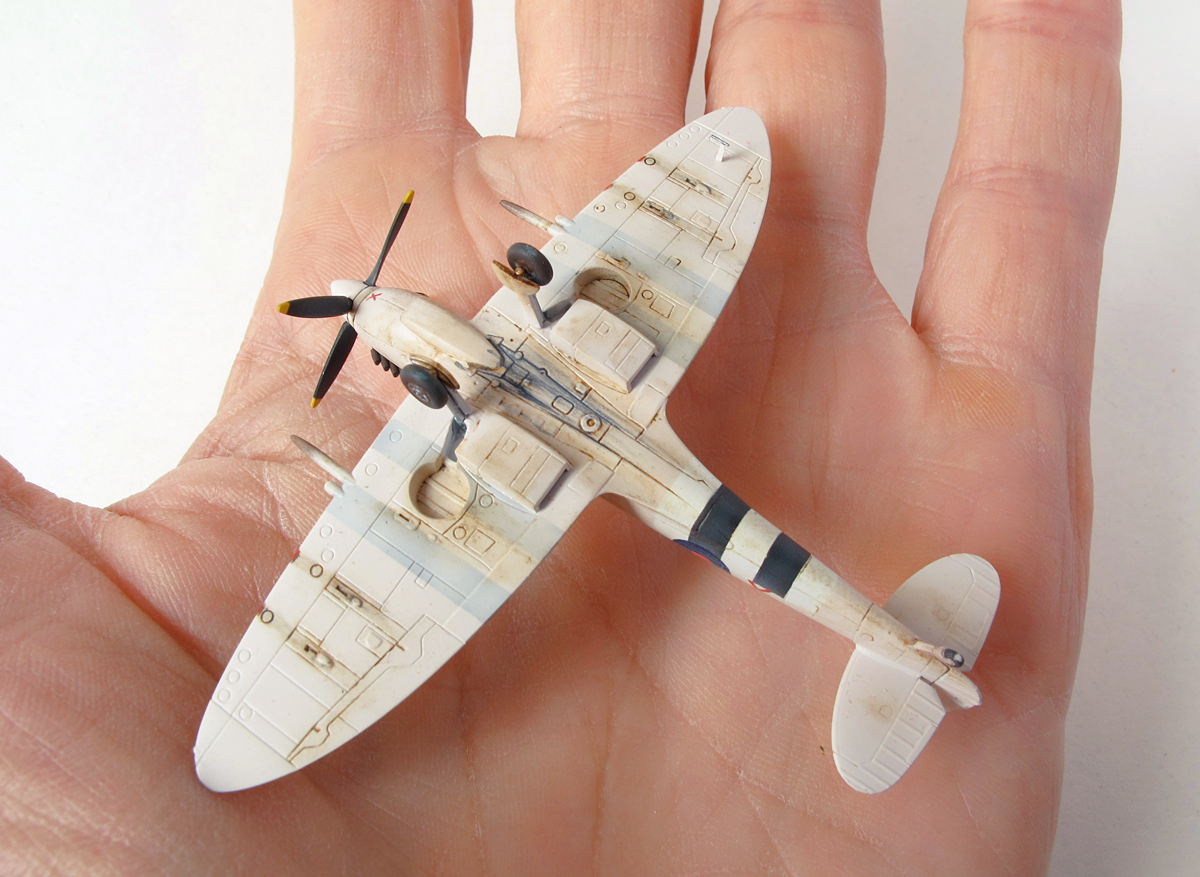 The fuselage invasion stripes were sprayed using dark gray onto the white base. There was a problem to keep equal distace between the masking tape stripes and to allign all of the stripes accurately – especially in those areas where the wing trailing edge meets the fuselage. Even minimal displacement looks intolerably bad. You can use this trick: Precisely cut out stripes of masking tape can be applied onto those places where the colour will be applied too – i.e. not 3, but all 5 bars are placed side-by-side. Thus the masking stripes hold precise distances and allignement too. After placing all 5 bars, those two of them representing the black colour are removed. The whole erea around is masked-out subsequently. The black stripes can be airbrushed then.

The degree of weathering used on the model kit is a matter of the modeler’s liking and of historical reality – a new machine can always be imitated. However, you may like to build an operational machine used in field conditions. Everything depends on whether your particular machine got enough service time to be weathered or if it would have been damaged earlier. 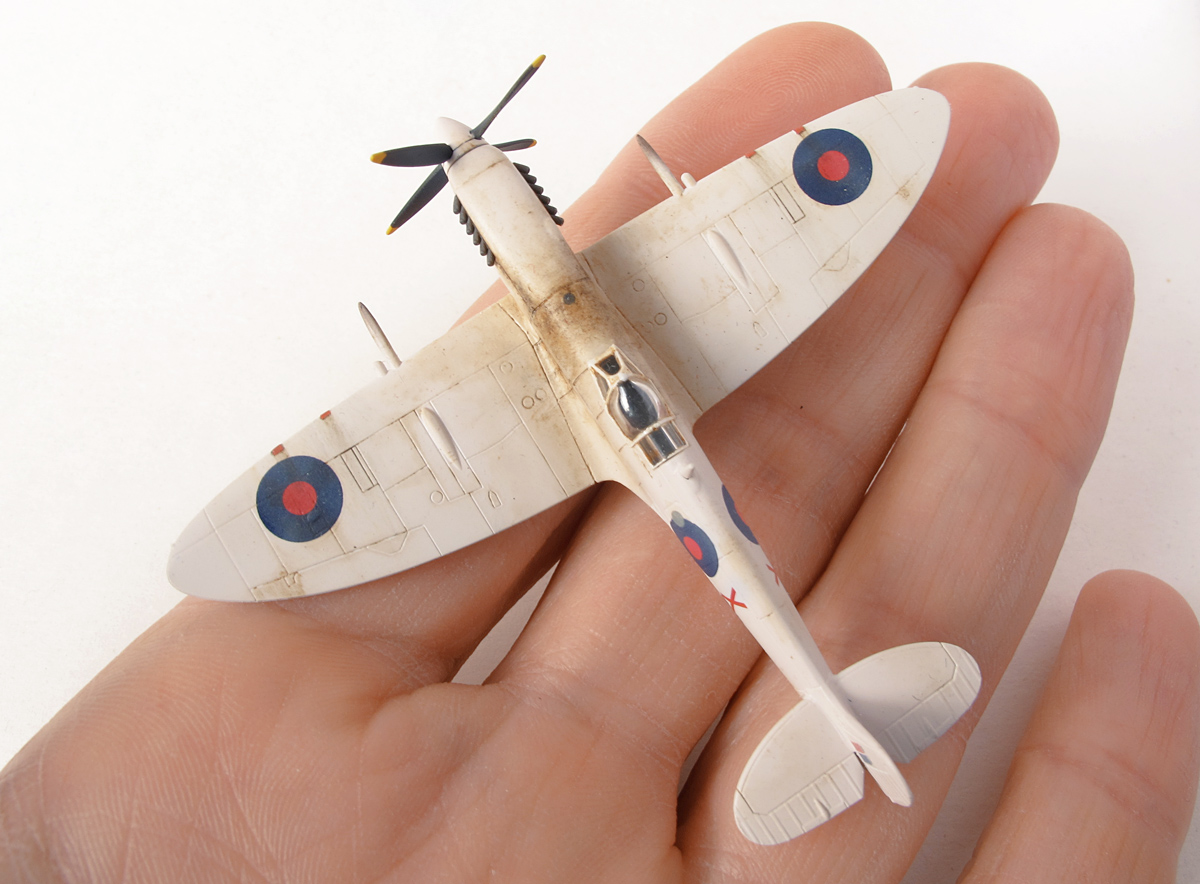 I have found this plane on the photograph nearly as clean as freshly painted. The second machine from the decal sheet (MK915 white “V”) and more planes from No. 16 Squadron were photographed much more weathered. I like a patinated finish so I decided for a small mystification: I used the same patina also on my red “X” – even though I do not know if it survived long enough…